With my change from employment, back to full time education, my available time for birding has been curtailed! I need to continue to reply to all the colour ring sightings of our Swans and Gulls by the fantastic army of observers. So with time constraints, it has been my ring reading blog that has suffered!  Trying to catch up!

Today I went to Bray Harbour.  I recorded P615,   Ringed in 2010 as an Adult, means it hatched before 2008!  It has been recorded at Bray Harbour every year since then. Also recorded 1778Km away in Lithuania where it was first ringed.

Out of of growing number of colour ringed Dublin Gulls I recorded 707:D, B30:D, B69:D and a really interesting sighting of B50:D.  B50:D was last seen at Gormanstown, almost 50km north of Bray.


So few coloured ringed Black-headed Gulls about this year.  Even 27H0 which was ever present during the winter months since 2013 has not been recently.  2ACA isn't even appearing most visits but was there today. 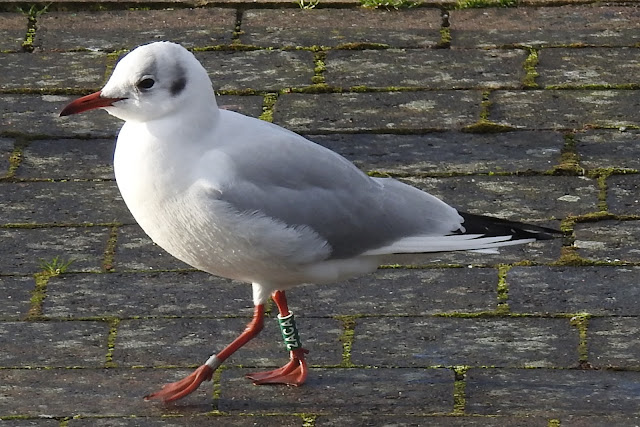 No Coloured rings in Sean Walsh Park, none in Tymon Park, none at Bullock Harbour!  Eventually as the Forty Foot got a single Colour Ringed Med Gull!

At Ben Madigan Park in Drimnagh 148:D made an appearance.  Ringed in 2017, it used to be a regular here but had disappeared for a year.


That later at Grangecastle Business Park, 826:D made its first appearance since ringing.  (An urban Gull from our project)


At Sean Walsh Park, Herring Gull 843:D appeared.  Ringed in the Dublin City Centre, it had only been recorded roosting on Booterstown Strand up to now.

I-WeBs Count on the Canal.  This year with a hoarding up where the Swans Roost at Portobello is throwing numbers out on my monthly count.  Coupled with an aggressive pair at Davitt Road, there are 31 Swans utilizing Grand Canal Dock.  This is outside my count area!  Only 60 Swans in my count areas where there should be 91.  However during my count I recorded another new species for my patch in Dublin city, a Water Rail!

I gave a talk to the "Friends of Tymon Park".  Delighted to do so, as it was Tymon Park that rekindled my interest in Ornithology.