Quick trip to Bray and the Great Black Backed Gull 3AL turned up.  It is 18 months since I recorded this Great Black-backed from Ireland's Eye  Last time was also at Bray Harbour. 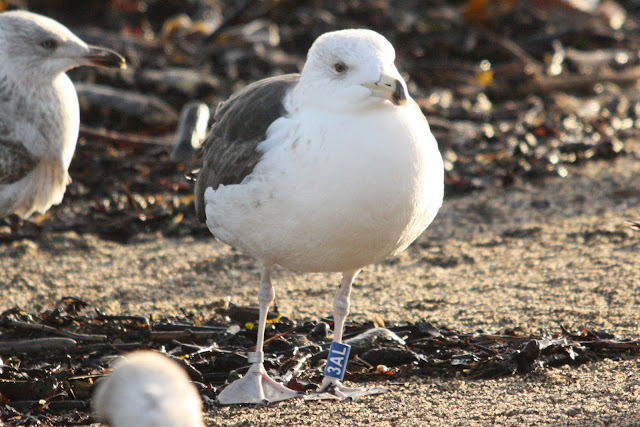 The Herring Gull from the Isle of Man was present.  It has been present frequently since October 2015. 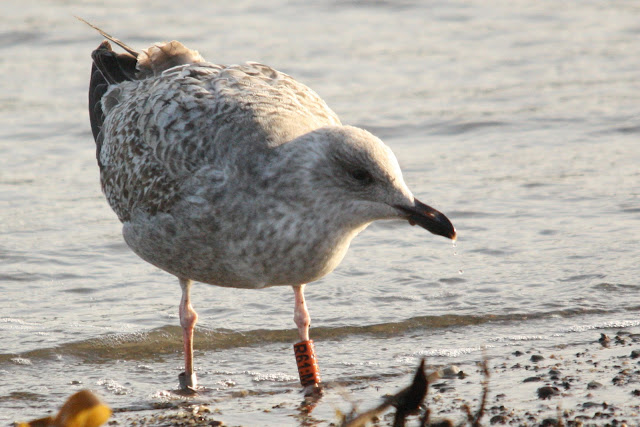 The CR Ringed Black Headed Gull from Lithuania was again present.  It was ringed as an adult so it is at least 8 years old. 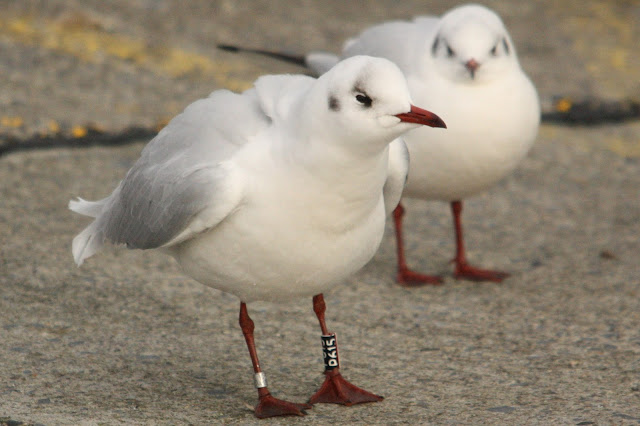 My bird of the day was just a local Great Black Backed Gull  BW[2KV].  The reason I selected it was that it was not recorded in 2015 and I thought it may be gone. 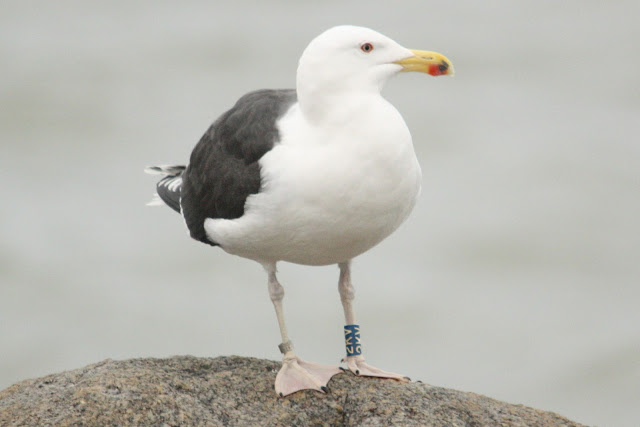 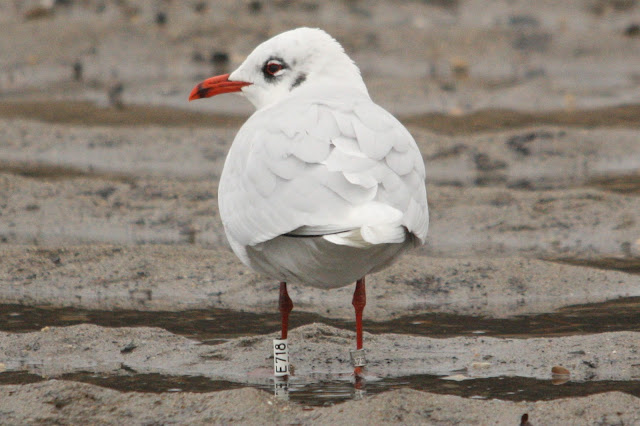 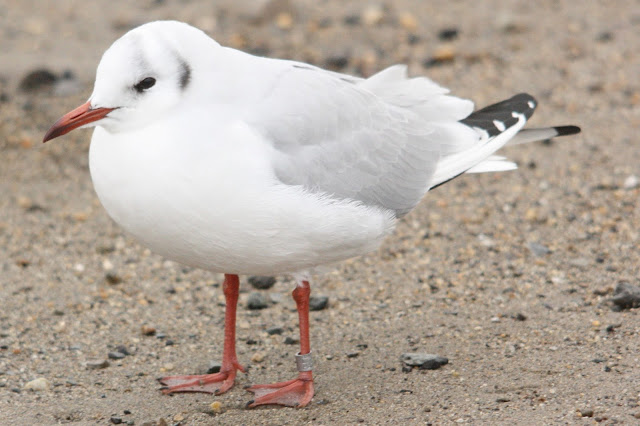 I should start a blog called "Ringed Birds photographed from my car" Here are some more light-bellied Brent Geese.  There were only two on the grass this morning and they are "Associates" 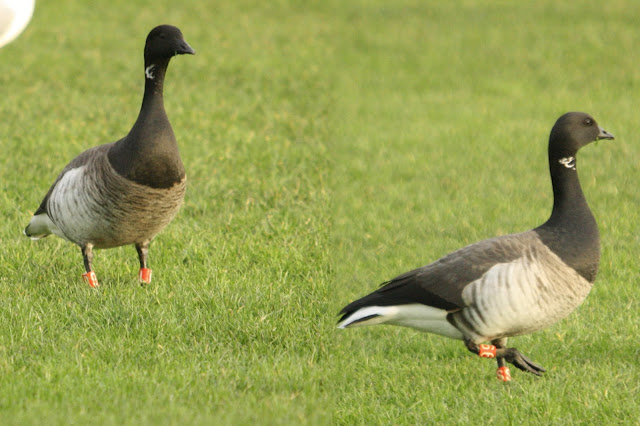 With reporting of Brent Geese they also ask about associates.  An associate is a birds that it is always seen with,  This is used to work out pairs and families.  The above photo is "stitched" from two photos as I couldn't get all 4 rings visible in one shot.  However the birds were never more than a few feet apart.

There is a Juvenile Black Headed Gull with a metal ring in the park which is so distinctive for two reasons.  The bird is far more advanced with it's moult than every other Juvenile and sometimes I can't see the juvenile brown showing.  The other reason is that it's ring is a type I didn't recognise. The metal is much thicher and it was overlapped.  Today I think I got it. It landed ran about and was gone in 2 minutes.
I think the code is HA36.807, I have sent it direct to Lithuania as I cannot attach photo for verification via IMPR.
Quick reply from Ricardas Patapavicius.  Code verified and I think a record for me at 2098 km from ringing site. 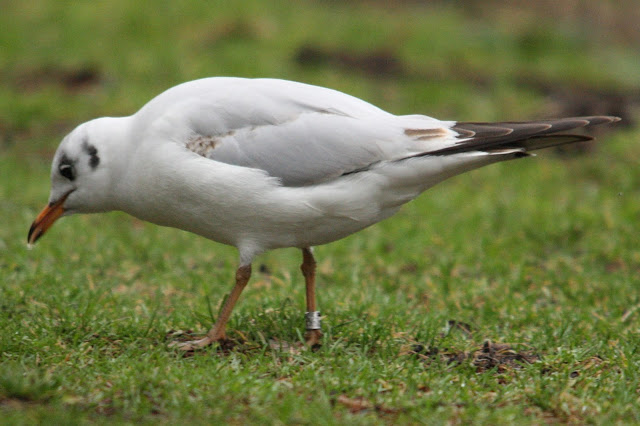 I was up very early and decided to go for a walk at Bray Harbour at first light.  Heading there I was thinking on what I would hope to see.  No. 1 on my list would be the Black Headed Gull from Lithuania P615, which I hadn't seen this winter.  (Then again with my arm I missed 8 complete weeks of birding and only doing short trips now). I also hoped to see the Isle of Man Herring Gull that others have seen at that location.  What a great hour!

P615 was seen and photographed.

I spotted a yellow ring on a Juvenile Black Headed Gull.  It turned out to be KFL4 from Russia or Latvia!  I have seen it in two different locations in Tallaght and now in Bray Harbour 20Km away.  It is very rare that I see a Black Headed Gull at a second location unless it is a night time roost site.

The Mediterranean Gull from Denmark W[3AAA] was present again but there was a Juvenile Med with a Green Ring which disappeared onto the water before I could read it.

The Juvenile Herring Gull from the Isle of Man R61:M did show.  Great morning and home for breakfast!

Fr Collins Park in Donaghmede, North Dublin, is not a place I'd been to before, but it is a really nice park.  I was there today and spotted another Green Ring on a Black Headed Gull.  Another Norwegian ring from the West Coast of Norway.  It had been seen in December very close to where I saw it.

There seems to be Brent everywhere in Dublin, but the wet mild weather means the grass is too long at most locations to read rings.  An almost instant response from Graham, in the Light Bellied Brent Goose Project with the last 35 sightings since it was ringed in 2014. 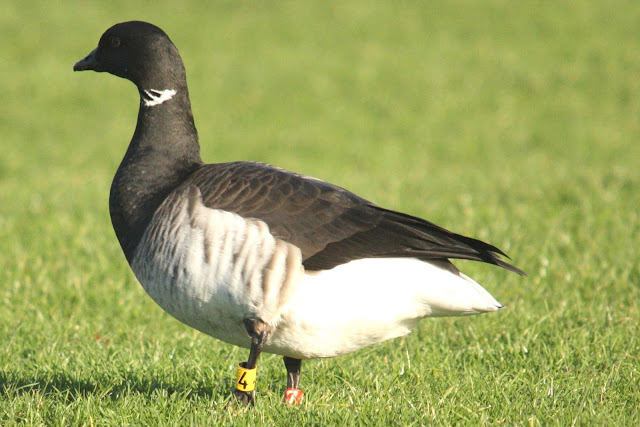 A short walk in Kilbogget Park to see if I could see a Norwegian Black Headed Gull I had heard was there.  Dogs, off their leads, continually frustrated my attempts to photograph it.  This was the best before I gave up.  The odd thing was, when I input the details into the Norwegian Web Site, it hadn't been reported from Ireland before.

At Howth there were Great Black Backed Gulls as usual.  What was most interesting was that LBBW(1UK)* was ringed in the nest in 2012, the bill is still sub adult which is what I would expect. Also ringed in the nest the same summer was 1SV.  It is far further along in gaining it's adult bill colour. 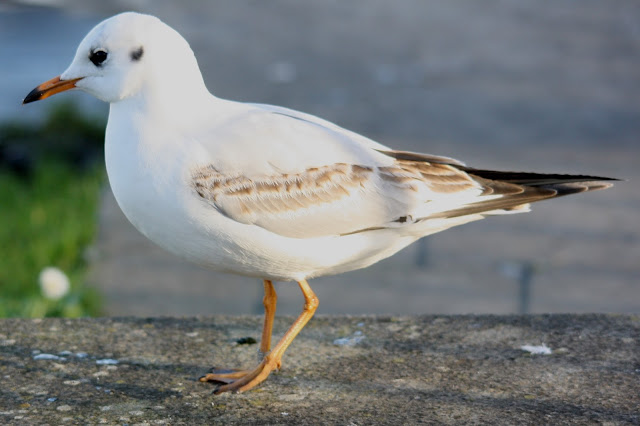 Another of my project Swans has made it to Bray Harbour.  It was ringed in Ballymount Park and since then it has spent most of it's time on the Grand Canal.  I will have to check with the rescue centers to be sure its movement wasn't "assisted", but it is about 19km.  The Swan is in pretty poor condition with a lot of "Pink Tip" feathers.  It is apparently caused by eating mouldy bread and preening the fungi onto its feathers. 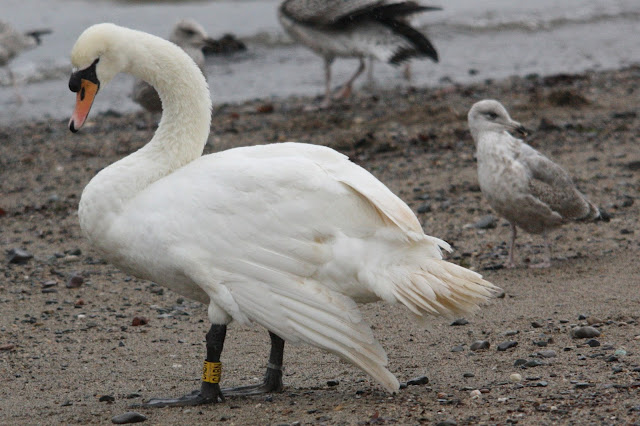 The Herring Gull OJH is also back at Bray. 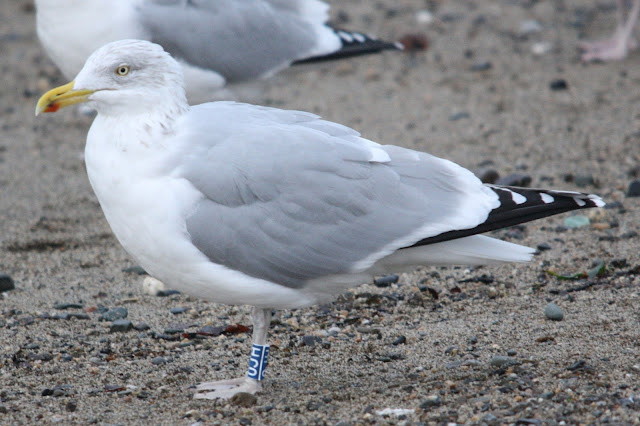 
At Bray Harbour I spotted a Mediterranean Gull with a White Darvic - 3AAA.  The most interesting thing about this individual is that not only is it Danish which is unusual for Dublin, but it is one of the Mediterranean Gulls that only turns up after Christmas!   It is a first time sighting of this bird for me. Apart from Dublin it has been sighted in Cork and South Yorkshire at the Orgreave Lagoons.  That is near Sheffield.

On the way home I stopped in Sandyford Industrail Estate.  The playing fields were flooded and there were 140 Oystercatchers, Brent Geese, Godwits and lots of Gulls.  Some had Dublin Bay Rings on but couldn't get near enough to read them!  Best photo below is of "AV". 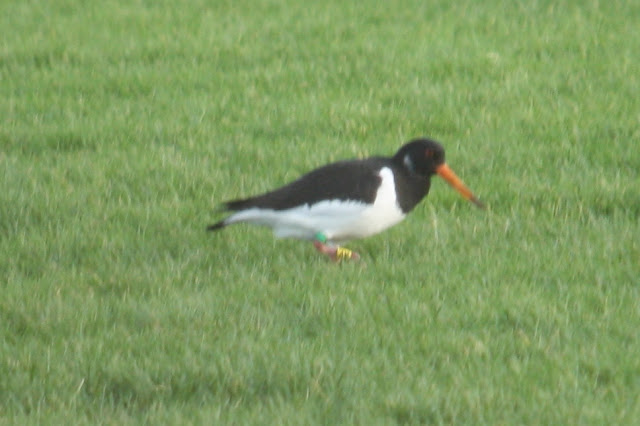 Posted by Graham Prole at 07:17 No comments: