The Coloured ringed Swans have started to disperse from their various ringing sites.  The first cygnet has made it to Bray Harbour 18Km SE direction and the first non breeding Swan has made it to Swords 20Km NW direction.  Sightings are so vital and appreciated and all sightings are responded to with report.

At Sandycove today there were only 2 Coloured Ringed Mediterranean Gulls but I spotted a Black Headed Gull with a metal and set about trying to read it.  Helsinki ST283.477.  I haven't seen this individual since January 2015, so it is back for another winter and same location. 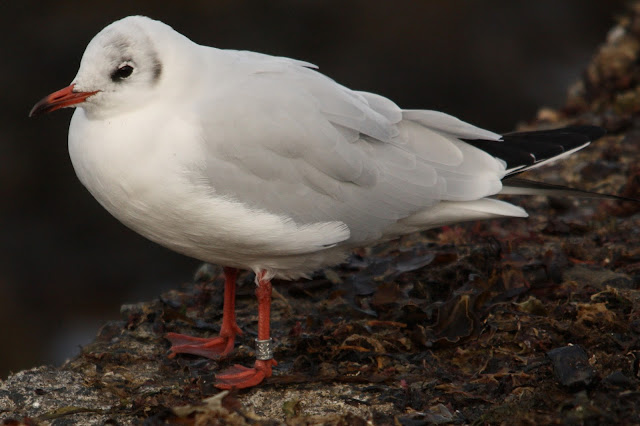 However, I spent some time on the Grand Canal reading coloured Ringed Mute Swans and saw another Cygnet from Tymon Park.  It has gone to a different location than it's sibling - that is now in Sean Walsh Park.  However for me there were two birds of the day.  Both Mute Swans with Metal only Rings.  Neither I had recorded before.  The mystery of the pink Dye yesterday was solved with it dripping from a bridge in Goldenbridge.  The Swans, pigeons and gulls all had dots of it on their feathers but it does not appear to be effecting them in any way.

At Grange Castle Business Park there were hundreds of Black Headed Gulls.  I have never had much luck at this location but thought I would check up on Mute Swans as well.  No Coloured Rings on the Black Headed Gulls or the larger Herring and Lesser Black Backed, but I spotted a Mediterranean Gull.  I have only ever seen one med gull at this location which was W[E147]  last year. I eventually got a photo as it few past. W[E147] again.

As regard the Swans, the family of pair and 4 cygnets which have recently moved here were on the lake.  Two more tried to join them but they were soon seen off.  The colour ring quite visible in flight.  Yes, there appears to be pink dye on the coloured ringed one

There are only 2 ringed Gulls in Sean Walsh Park, that is about right for this time of year.  The Swans are keeping me interested in this location.  The pair that have been harassing the other 11 have moved to the big lake and CACV has taken over the role of the aggressive dominant male, here he has just chased others out of the lake. 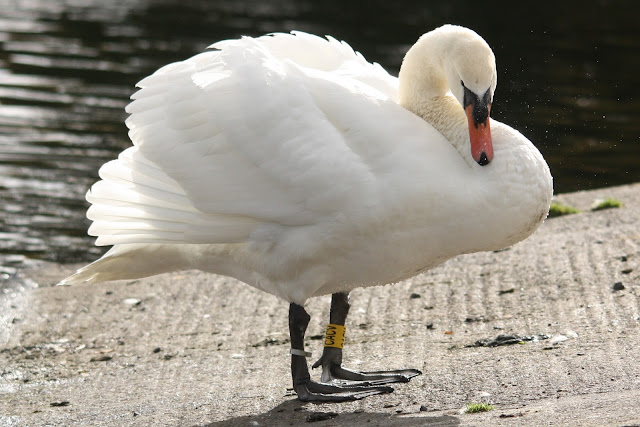 This morning I went to Bray Harbour, Bullock Harbour, Sandycove, Sea Point and all I saw was one coloured ring.  Herring Gull 0JH.  So I went off to read Swans.

On the Canal there were 3 of our project birds including a Cygnet from Tymon Park.  This is proving to be a great time to get out and read the newly coloured ringed Mute Swans.  There movements are getting interesting as they certainly move about.  I can't wait till some one reads the first coloured ring at Bray or Swords.

At Grange Castle there was just one Swan instead of the family of 6 last Friday, so I went to check and see the ones on Corkagh Park.  All Swans and Cygnets in the family present and correct and neither Adult ringed from this pair.  So the origin of the family of Swans seen on Friday is still unknown.

At Ballymount Park, success again. There were 3 that had been ringed in the park and also a cygnet from Ballycragh Park in Firhouse.

Too busy catching and Colour Ringing Swans to take out the camera!!

Following a tip that a family of 2 adults and 4 Cygnets had turned up in Grange Castle Business Park, I went there at lunch time.  One adult carried a metal ring W27889 that I had not seen before.  They are possibly from Corkagh Park which is very near and one adult was ringed which I was never able to read.  I will have to check tomorrow and see if they are gone from that location.  It is apparently unusual for the Adults to leave such a prime location as a complete family group - they normally just chase the young away.

Today at Sean Walsh Park I spotted a metal ring.  The Scandinavian Countries use a slightly taller ring and I was on a mission.  Managed to photograph the ring and it is no other than the Black Headed Gull 6430814! The absent dates from the park are now as follows.  Back 1 week earlier than last year. 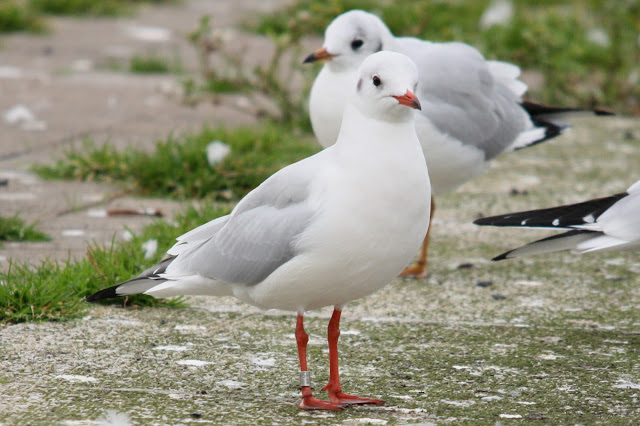 On September 25th the Black Headed Gull 27H0 appeared in Sean Walsh Park both bloodied and limping.  I had not seen it since and feared it hadn't survived it's injuries.  However it turned up today, limping but alive and much improved since the last sighting. 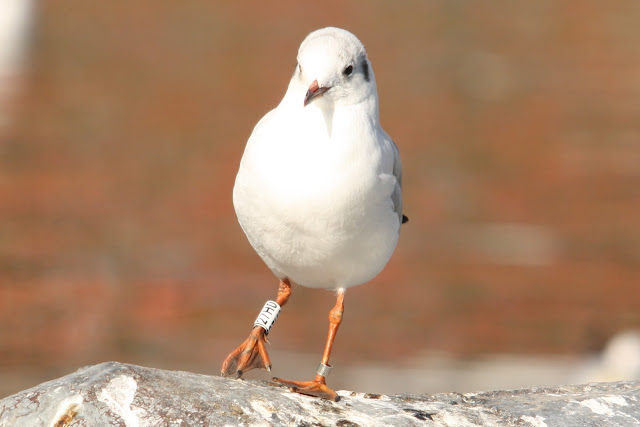 Most of my recent blogging has been about Mute Swans, not just because of the project I'm involved with but because I haven't seen any coloured ringed Gulls.  Hopefully as winter approaches I will get more sightings.

On the Grand Canal this afternoon, I spotted two of our Coloured ringed Swans.  They were both ringed in Ballymount Park two weeks ago.  Distance between the two sites is 4.5km.  I have long suspected that these two herds interchange regularly as the numbers of Swans at both locations fluctuate daily. 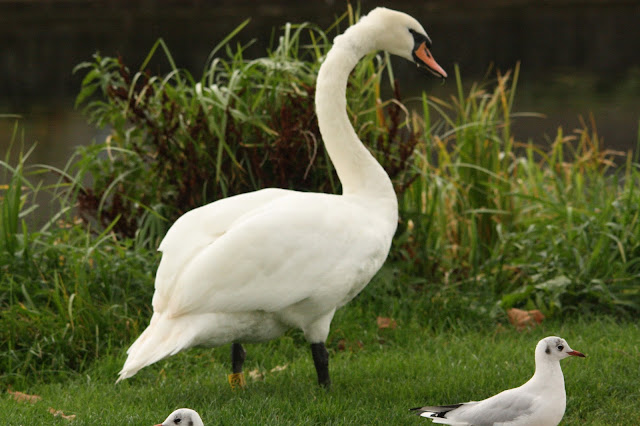 Another excellent day Colour Ringing Mute Swans.  Many thanks to all the ringer and helpers, without whom this project would be very slow to get started.  There are now 49 Mute Swans, both Juvenile and Adult, with Coloured Rings.  Now to get out there are monitor their movement - or lack of it!

Over the week end I was a little saddened that 2 Cygnets were missing from Tymon Park.  We had colour ringed 2 Cygnets from a family of 4 and are planning to try and ring the other 2 next weekend. One of the missing cygnets was coloured ringed and maybe all was not lost.  Today at Sean Walsh Park two cygnets turned up and yes one was CABC from Tymon Park.
The Lake in Tymon Park is on the Poddle River and Sean Walsh Park is on a Tributary of the Dodder River.  They are not connected by a water way and it can only mean they flew almost 3 KM.  I didn't know they could fly at 18 weeks, according to one internet source they can fly at 60 days, but I have noted that they only start exercising their wings at 12 weeks (84 days). 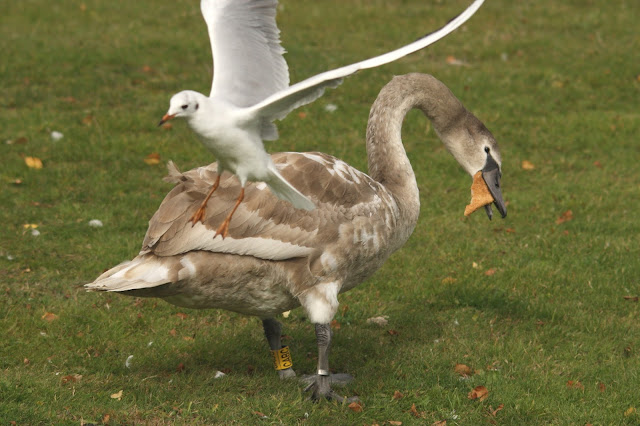 The Swan projects have taken time away from reading Gulls, but I got down to Sandycove today even though the tide would be too high for good numbers of Mediterranean Gulls.  There were 5 about and 1 with a coloured ring.


Re-sighting the Swans that were colour ringed last week end, brought me to a few parks and I did check the Gulls for rings - with out success.  However, very pleased with the coloured Rings.  They are easily read under water and it is making re-sightings so much easier!