Same coloured rings as yesterday E5VA, 27H0 and OMA in Sean Walsh Park.  The addition of quite a few other birders meant some one saw the Iceland Gull.

Today at Sean Walsh Park I only had 5 minutes, but the Black Headed Gulls E5VA and 27H0 were observed.  But Darvic of the Day goes to 0MA, a Herring Gull that although I have seen before in the Park, as I put the rings on it, it is special to me.  It also shows that although some of the Herring Gulls may be urban and breeding in the industrial estates, some are from the coastal colony of Irelands' Eye. 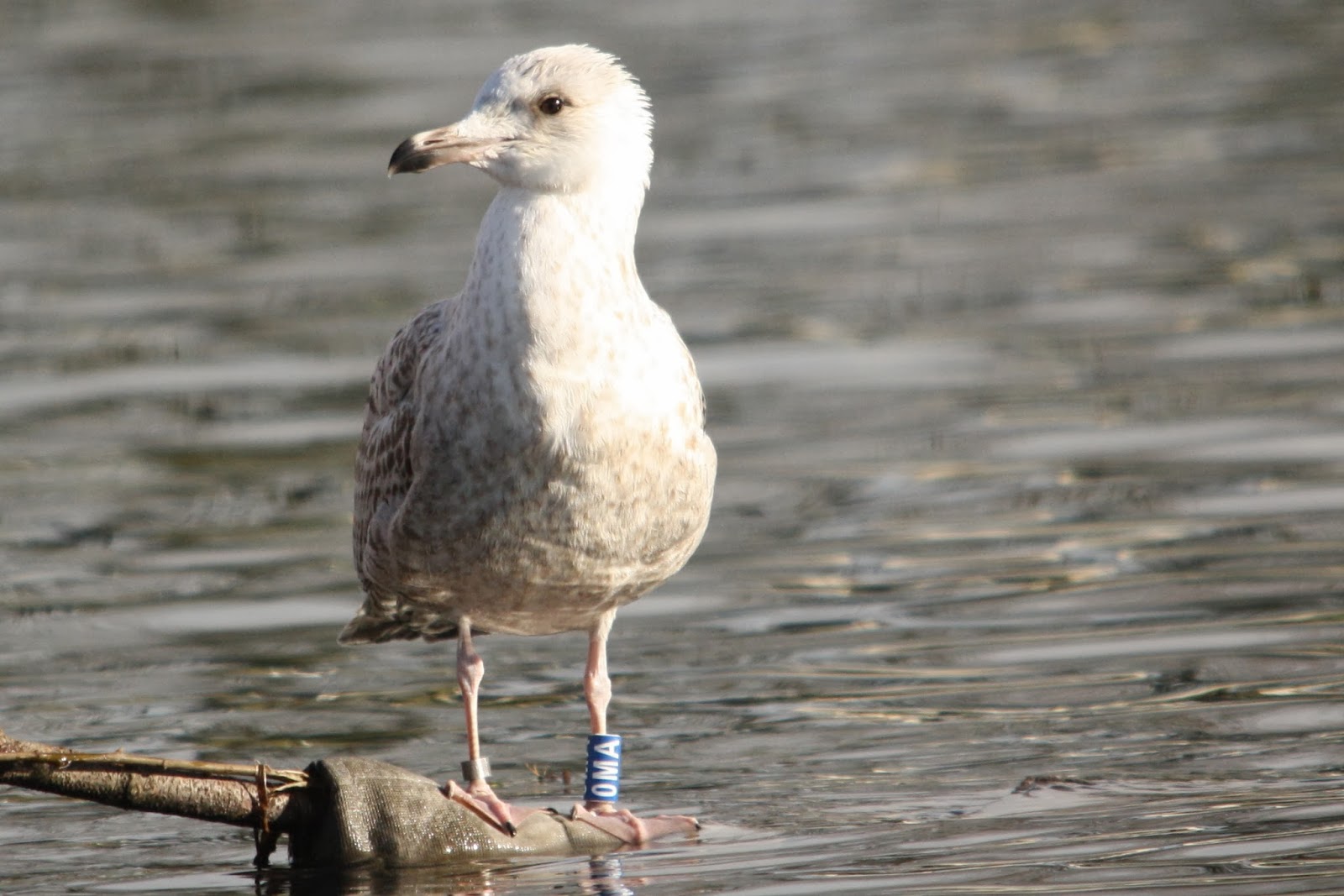 Received a letter in the post from Belguim, to say the Black Headed Gull I saw in December was ringed in Antwerp in 2012. Strange but nice to still get replies by post!
Sean Walsh Park today was wet and windy but Black Headed Gull 27H0 was present at Lake 5 again.  I also read a Swedish ring that I hadn't read since early January.

Sean Walsh Park today and Black Headed Gull E5VA turned up again.  I haven't seen this Gull for a month so nice to see it is alive and well. Black Headed Gull 27H0 was also present but at lake 3.  Don't often see it there.

Visited the Bull wall looking for recently ringed Bar-Tailed Godwits.  This Black-Tailed Godwit isn't part of the Dublin Bay Project!  I will have to track down the scheme.
Postscript.  The Godwit or BLKWT-RL:O//Bm-LL:ON as it's better known was ringed in Wigeon Hide,

Poppintree Park and Common Gull Yellow[2A35] was there again. Four visits and 4 sightings.  This is excellent as 'Winter site faithful' is being observed.  I recently got another email from Iain in the Clyde Ringing Group.  There are 50 of these Common Gulls with Yellow Rings to spot so everyone keep checking the flocks! Did a spot of Bird watching in Tallaght and observed this Black Headed Gull from Galway, I've seen this individual before. 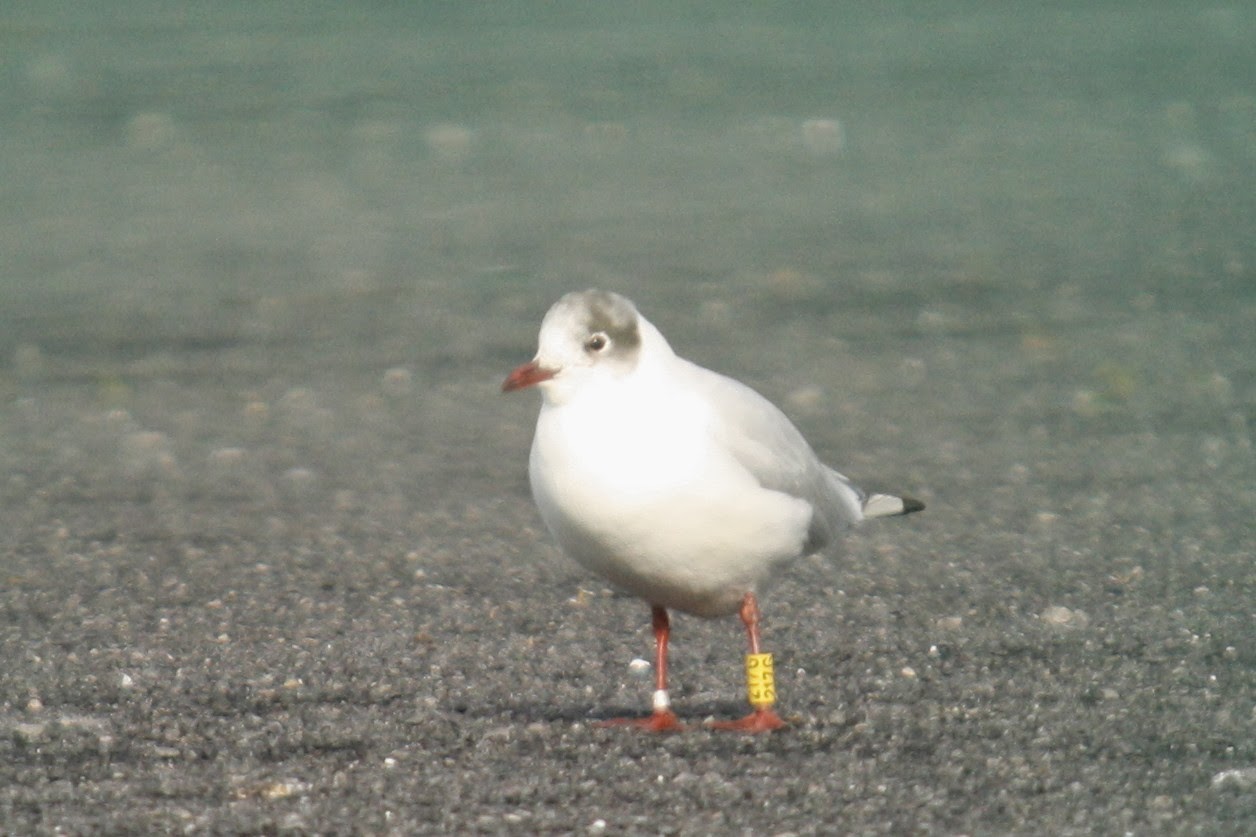 Brent Goose catch day.  All assembled in Finglas, catchers, ringers and then helpers (like myself).  Wind too strong and as a result - no Geese caught.  Oh well.  I went to the Bull to try and photograph a Bar Wit from the Dublin Bay project.  The result is below.  If you have a scope or camera, go read them they are every where! The Bar Wit we were looking at yesterday was foreign and not part of the Dublin Bay Project

Went to Sandymount Strand to see if I could read Redshank and Bar-wit codes with my camera.  I happened to meet another ring reader Sean.
We could see the rings on a Bar-wits, but even with a quality Scope and 60X lens, but we had difficulty reading it as it was so far out. As for the Redshanks I tried to photograph, this is probably the clearest!!!!!!!!!!

Oystercatchers are easier to read!  I happened to see the Med Gull I had read yesterday in Clondalkin.

I went to Grange Castle Business Park in Clondalkin today and was rewarded with a Med Gull and ring.  It is fascinating to see them so far in land.  I look forward to finding out if it roosts at Sandymount and to see if it often forrages else where.  Sorry for the poor quality photo.  I was changing settings when it flew away and didn't return! 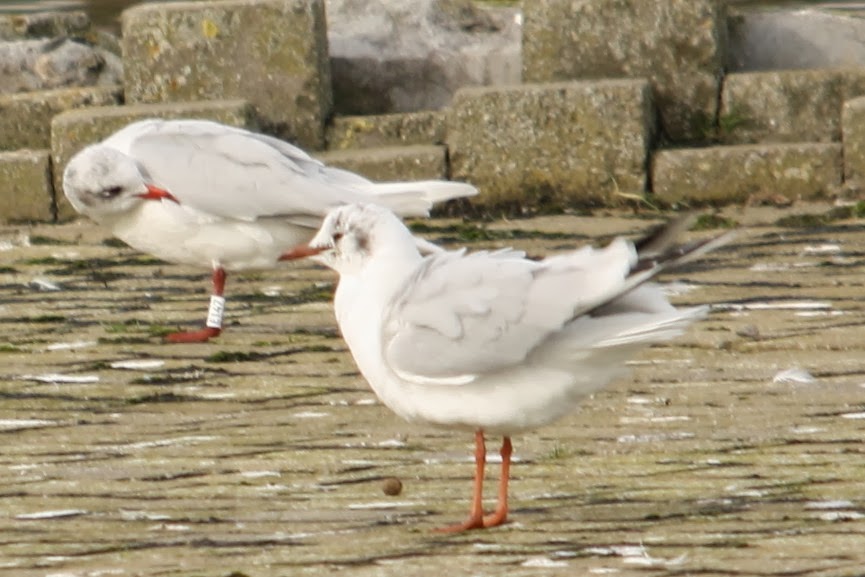 Back to Poppintree Park to check on the Common Gull from Scotland.  It is unusual for me to observe how site faithful a Common Gull is, as so few are coloured ringed.  It was present again. 3/3 for attendance! 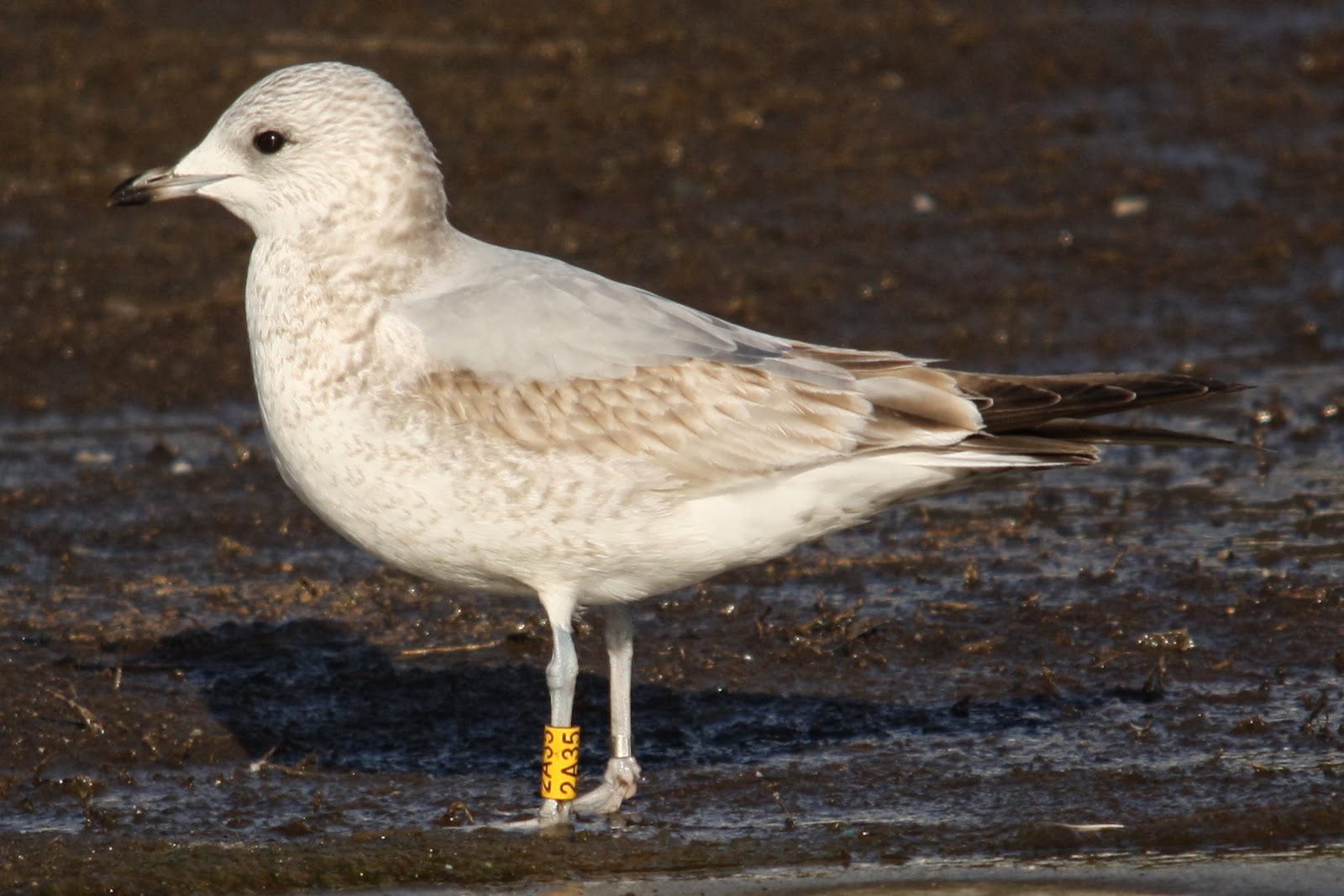 Storms all week have moved the Gulls onto the flooded pitches. However Black Headed Gull 27H0 from the UK remains ever present in Sean Walsh Park. 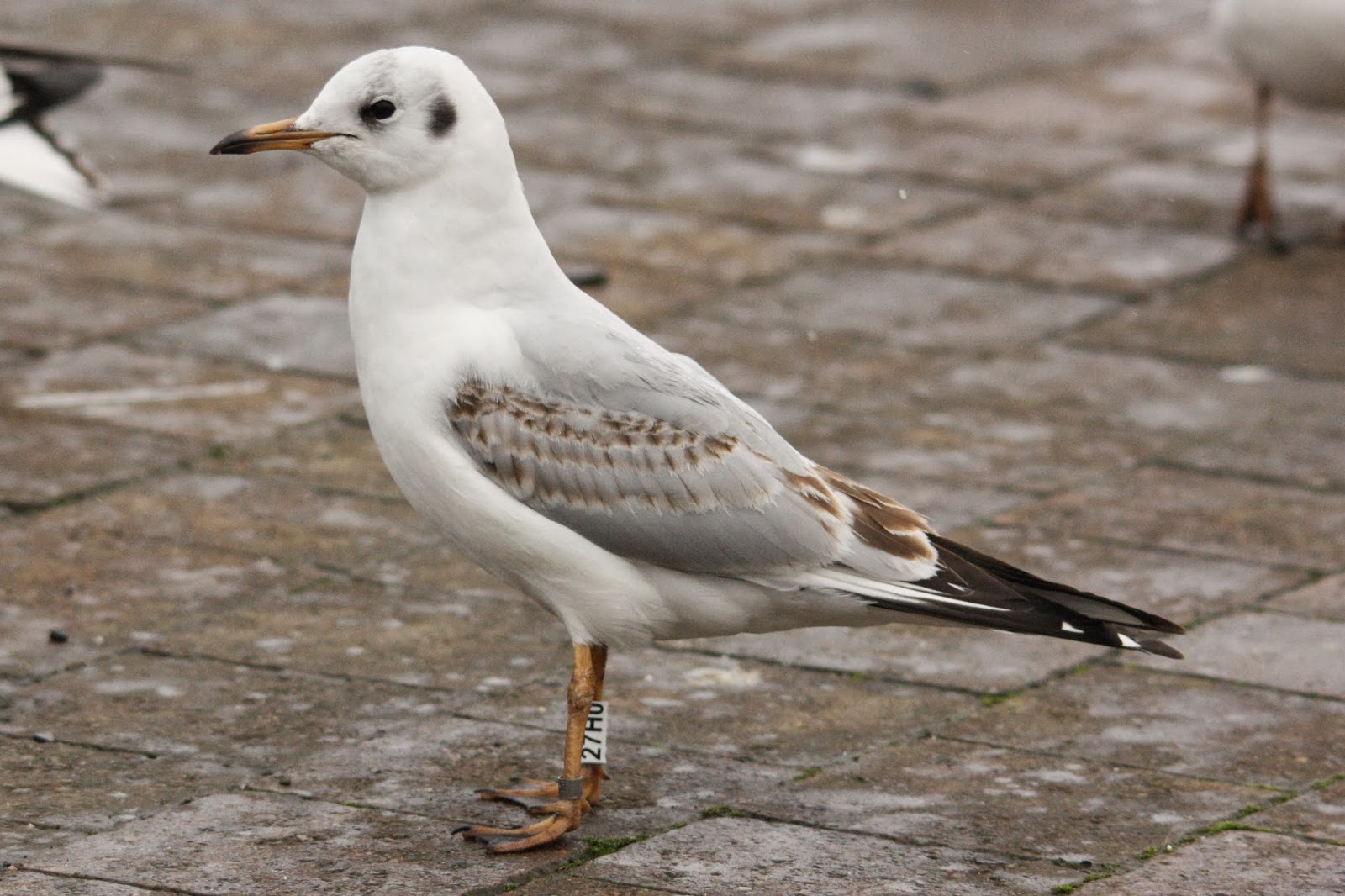 No gulls with rings today at Howth or the South Wall, but plenty of birders out looking for the Ross's Gull.  A disappointing day so I stopped at Sean Moore Park and read the rings on 18 Brent Geese.

The aim today was to go to Poppintree Park and strengthen the theory that Common Gulls are also Winter site faithful, by re-locating 2A35, who I saw last week there, and to get a better photograph.  Photos today were a little over exposed, but it wouldn't land or settle which always makes bird photography more challenging. 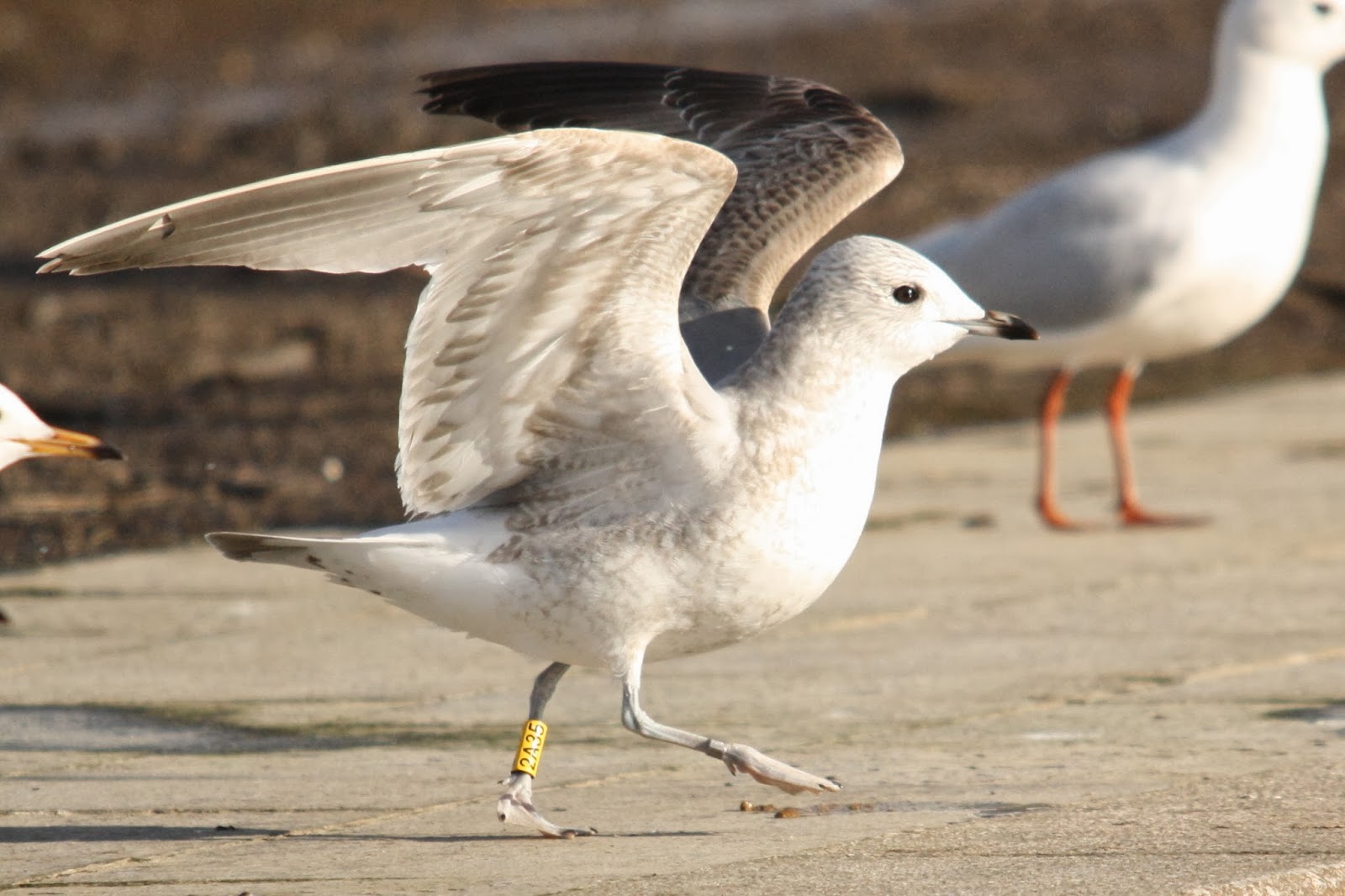 A lot of gulls in Tallaght this week, but due to rain, nearly all on grass fields.  Only one Darvic seen 27H0. This first winter Black-headed Gull is from the UK and is frequently recorded in Sean Walsh Park, Tallaght. 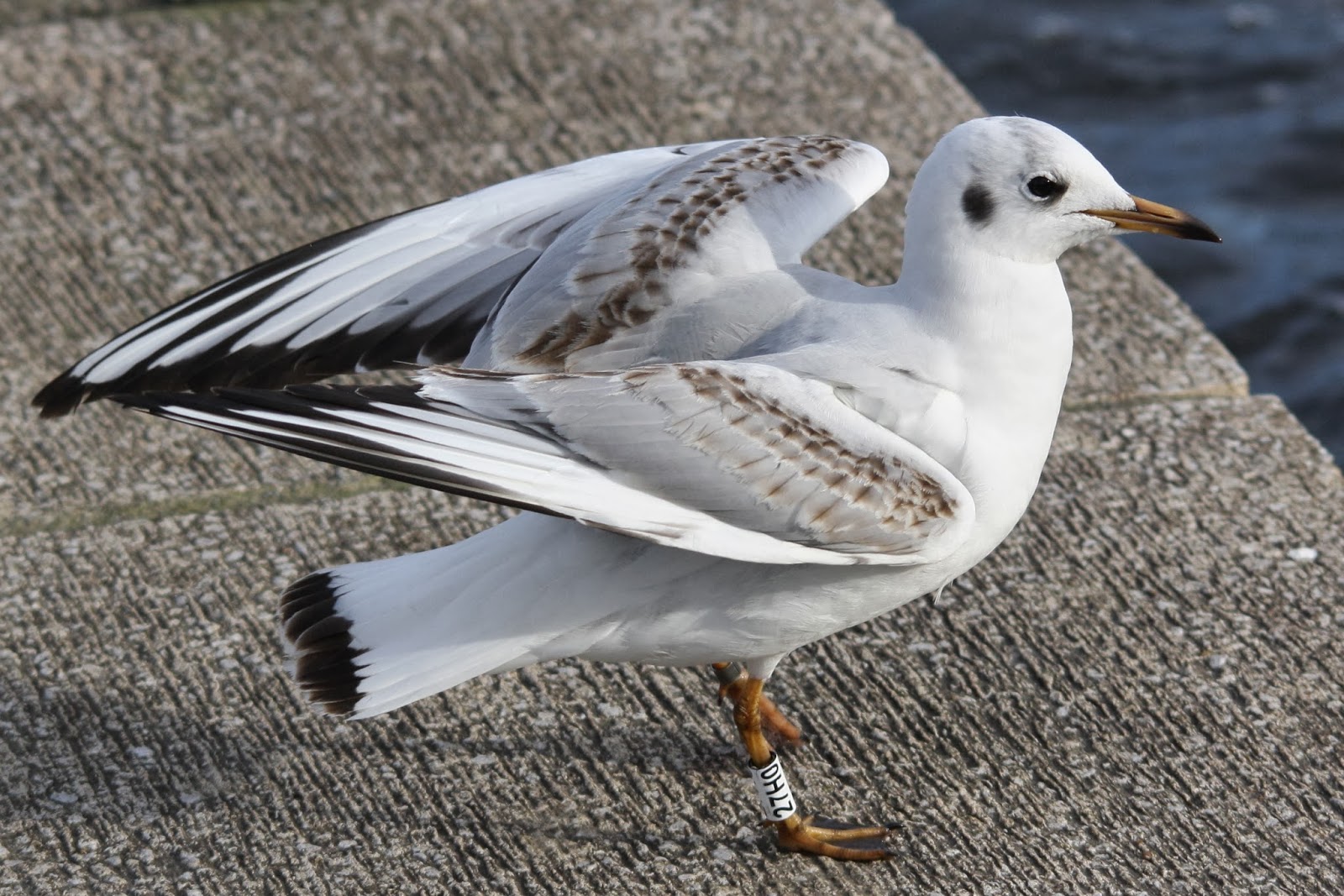 I went to Poppintree Park to check if the Swans had metal rings.  They do not. I did however see a common Gull with a Yellow Darvic Ring.  I thought it was Scottish and sent the report. Report received on 2nd of February.

"This is our first ever colour ring report from our new Common Gull project, and our first to Ireland ever!"

This bird, ringed as a chick on 7th July 2013 at Hunterston Ayrshire.

Many thanks to Iain Livingston of the Clyde Ringing Group for his rapid reply.