Sean Walsh Park again at lunch time today.  It was well worth it today!  On January 8th I had recorded a Herring Gull 144:D but my camera battery had died.  Today I photographed it.   Ringed on a Hospital Roof, the plumage is pale looking.

Suddently there were 2 CR Herring Gulls together with the Scottish Ringed A:E85 joining it. This gave a great opportunity to compare them.  The Scottish one has the classic mottled bill I would expect, but Red 144:D has a jet black bill like a Lesser Black-Backed Juvenile.  I have gone through my recent photos and the Dublin Herring Gulls all have a much darker bill that the classic Larus Argenteus.  I certainly need more photos to rule out Lesser black-backed Gull, but the colony was entirely Herring Gull and Lessers should be in Portugal or Morocco at this time of year! 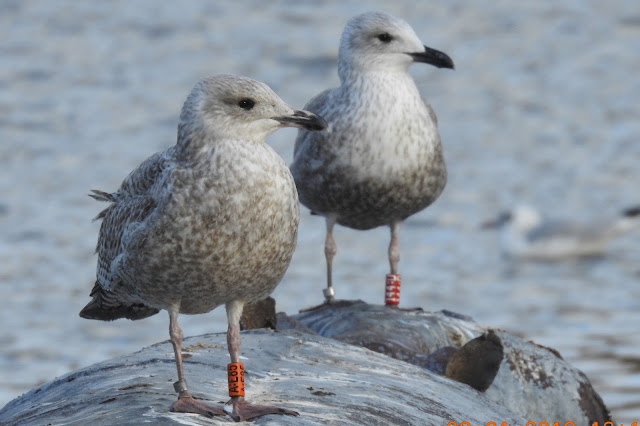 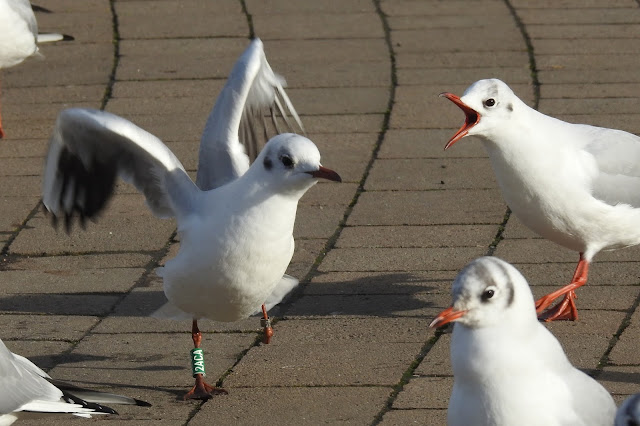 However the big news of the day was the arrival of a new Swan at the Stadium pond.  Last year in February CATI died (Autopsy - cause unknown) and its partner CAAH and an unringed swan failed last summer to produce any cygnets.  Today CAXF was present with CAAH.  CAXF was hatched in 2015 and ringed in September 2016 at Broadmeadows, Swords  This is the first time it has been recorded away from there.  I would say it is too young to breed, but we will wait and see.

At Ben Madigan Park in Drimnagh, again the Brent were in.  However, bird of the day was a Black-headed Gull that was there!  White Y28 was new to me!   I sent off the report to Kjeld Tommy Pedersen and just over an hour later received the life history!


What is surprising is that although it was ringed in Denmark in 2011 as an adult, it has only been
seen once in Dublin before (in 2014). It was not recorded anywhere in 2017.

Managed to read 8 Brent Geese.  Thank goodness Pixels are free as it took over 100 photos to get the codes.  A sample of photos below.


Surprising, that there were roughly the same number of Brent as last week, but only 1 ringed bird the same!

Grangecastle Business Park a quick 10 minutes only produced 1 coloured ring.  Last seen on January 1st at the same location.  A very pale Herring Gull by comparison to all the others there.

Herring Gull A:E85 was in Sean Walsh Park 3 days in a row, so time to try another park.  At Tymon Park I recorded The Polish Black-headed Gull T96W is considered "resident" in this park with sightings now in November, December and now January.  A small increase in the amount of dark feathers on it's head indicating the start of it's breeding plumage dark brown hood. 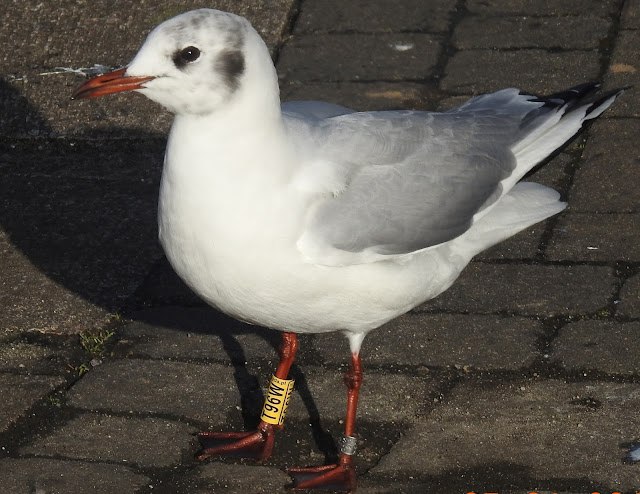 A very short lunch break today, but in the 5 minute walk I spotted an Orange Darvic on a Juvenile Herring Gull. On January 19th, I had seen an orange ring but failed to read it.  I had assumed it was another Isle of Man ring.  However, it is from much further afield!  The scheme is from Ayr in Scotland, about 270 Km north of here.  I have reported it to that coordinator, Dave Grant a few minutes ago. 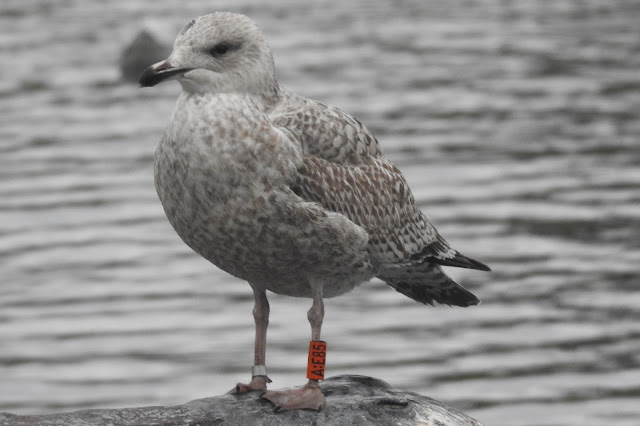 A complete washout today!  So we went and ringed some more Mute Swan Cygnets.  They are starting to disperse so it it still very worth while to ring them while still in Family groups.  ie we still know who the parents are.

Persistant rain made for a damp afternoon.  I drove to Ben Madigan Park in Drimnagh to see if any of our Red Ringed Herring Gulls were present.  The park is tiny, not much bigger than the football pitch in the middle of it.  There were 272 Brent Geese.  So, from the dryness of my car I started reading rings.  Recorded 2 of our Herring Gulls and 5 Coloured Ringed Brent.  There was a Red Ringed Great Black Backed Gull, but the grass was too long to read the ring and it soon flew off.  200 photos later I went home having not got out of the car!

These repeat sightings of our Juvenile Herring Gulls do start to show site faithful behavior, but to a lesser extent that the smaller Black Headed Gulls


With the Brent it is photographing a series of shots while they are walking to get both rings.
(Right Leg Code, Left Leg Code, Right Ring Colour, Left Ring Colour)
The first Brent Goose is 3 B, Blue, Blue scribed as 3BBB.

The Lituanian Black Headed Gull was recorded again as was 2ACA. However I spotted an orange ring on a Herring Gull Juvenile.  Probably from the Isle of Man.  Never located it again to get the code, but maybe it will show again soon. 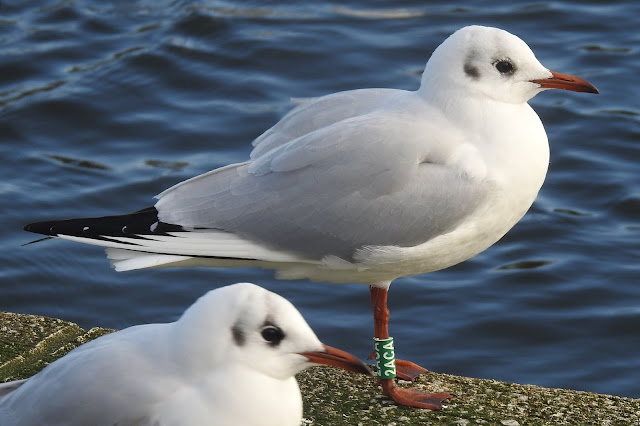 In Sean Walsh Park, The Herring Gull 010:D appeared again.  It has been 2 months since I last recorded it.  Black Headed Gulls 27H0 and 2ACA also present.  3 rings in 20 minutes. 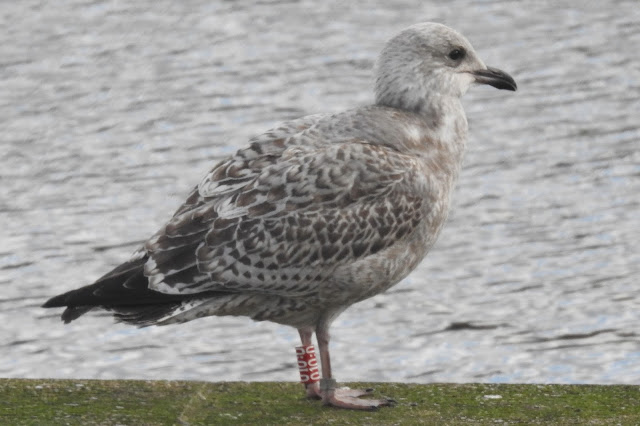 However, the exciting news of today, is a report of one of our Juvenile Great Black Backed Gulls being sighted in Wales 173km from where it was ringed.

On my lunchtime walk I spotted a metal ring in Sean Walsh Park on a Black Headed Gull.  There have been so few this winter, if I got the code it would certainly be new on the list for this winter.  Out with the camera and 47 photos later the full code of this Lithuanian Gull was obtained.  I have recorded this Black Headed Gull 3 times before all in March 2016.  I never recorded it last winter.  It was ringed as a chick in 2014 50km NE of Vilnius.  Great to see it back. 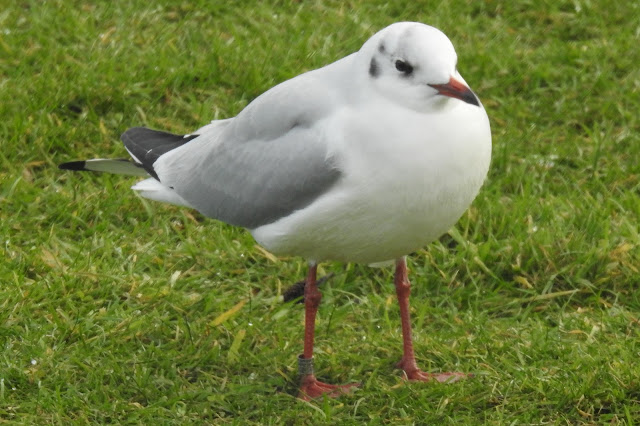 There are still Mediterranean Gulls in Sean Walsh Park and although today there was a new Juvenile - No coloured rings yet. 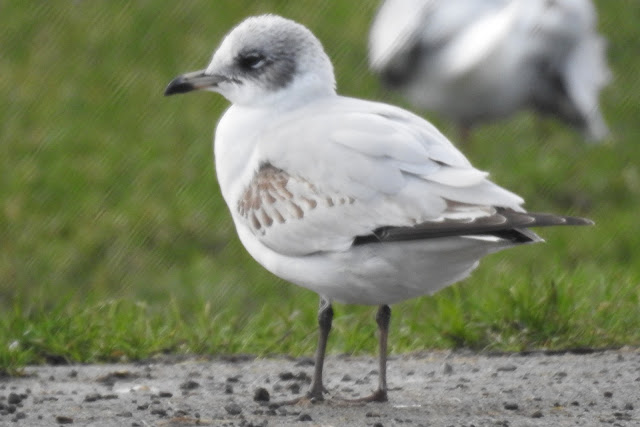 Today I finally managed to re-sight 2ACB.  Having only ringed it last week I expected to see it daily like 2ACA.  When it flew in and landed, before I read the code I knew it was 2ACB as both it's legs were the same colour! 2ACA has different coloured legs and feet!

The Black Headed Gull 2ACA has been easy to locate every day, like 27H0.  I haven't seen 2ACB yet.  I hope it was a park regular and not just passing through!

Yesterday, we caught our first 2 Black-headed Gulls since the Club was allocated Coloured Rings.  Today I photographed 1 of them in Sean Walsh Park.

On these days the priority is counting.  My allocated sections are 7km of Grand Canal.  However, this does give me a monthly Swan Count.  The count finishes at the Grand Canal Basin and I was rewarded with a red cringed Great Black Backed Gull, again from the Dáil! 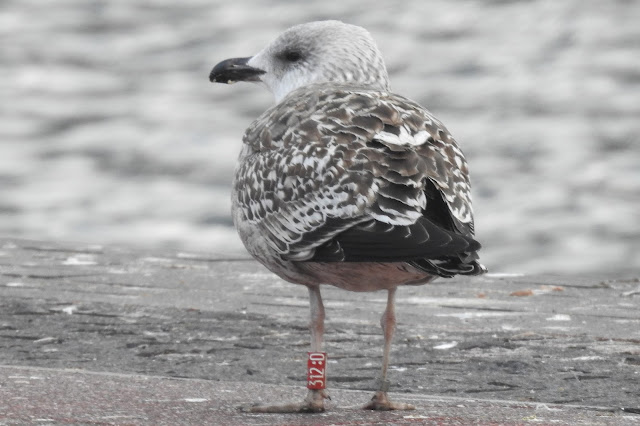 This afternoon I drove around Ben Madigan Park in Drimnagh and immediately spotted another of our Gulls.

Herring Gull Red [264:D].  Ringed on the roof of a building on O'Connell Street in the center of Dublin, this was another first sighting. 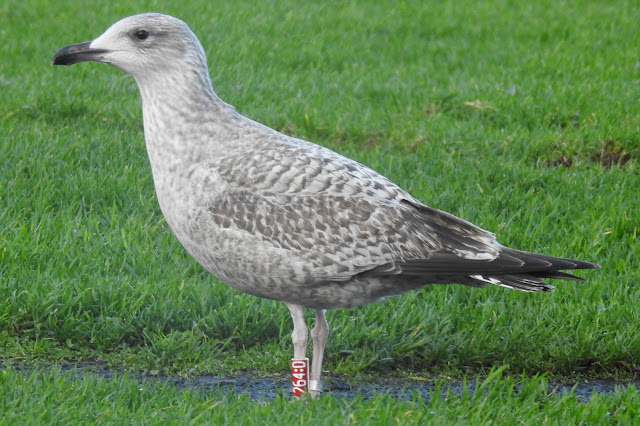 However, I spotted yet another red Ring.  8:D was all I could see.  I waited till it moved and Herring Gull 148:D was recorded.  This is an exciting record as it is the 2nd time I have recorded it at this location.  Although the last time was November 26th, it does give an indication that there may be some pattern to their movement. 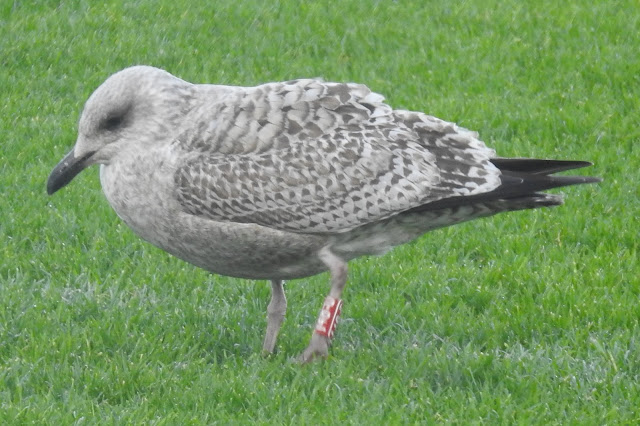 Out for half an hour on this bitterly cold morning.  I thought I'd try Grangecastle Business Park again.  Swan numbers are down to 6.  However, today I had more success with the large Gulls.

On December 20th 2017 I had spotted an Isle of Man ring at this location, but that was on a Juvenile.   This is on a 3rd calendar year Herring Gull!  I rarely get any Isle of Man rings unless they are on Juveniles.


Great Black Backed 307:D.  Ringed on the roof of the Dáil.  In October I recorded it at Howth, which is 25km ENE of this location. 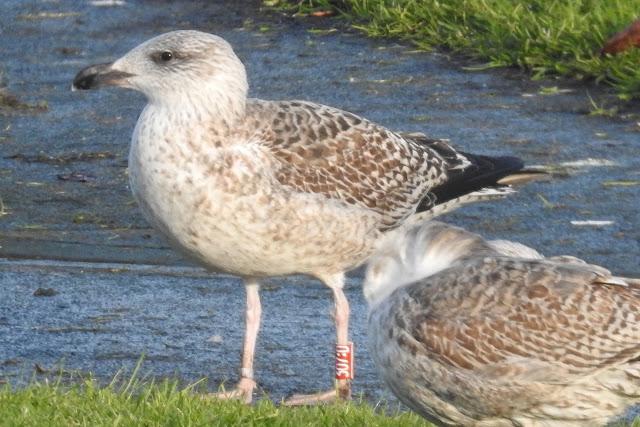 Herring Gull 005:D.  Not many were ringed on the roof of the Dáil, but this is another of those.  A first sighting since it was ringed. 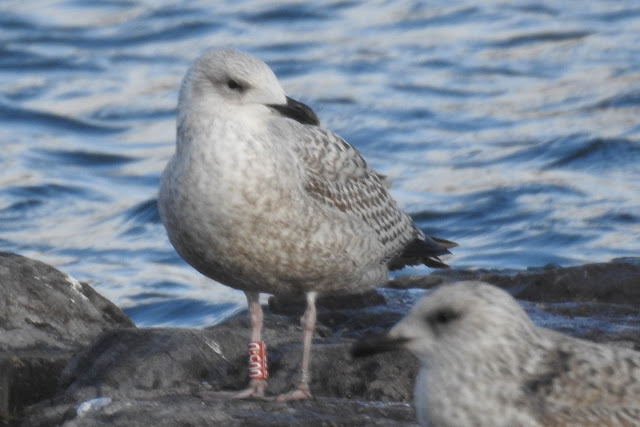 Herring Gull 112:D.  Ringed on Irelands Eye by me!  This is the first sighting away from Ireland's Eye. 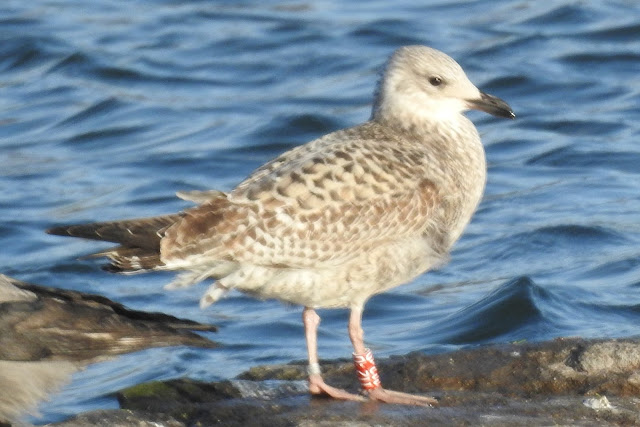