The Black Headed Gulls have started slowly to return to the Parks of Tallaght.  The first 2 appeared a week ago and today up to 9.  There are 5 1st years and the adults will probably be failed breeders, no rings yet to give the origons of these early arrivals.

At Bray Harbour the long staying Isle of Man Juvenile Herring Gull was still there.  I will not be long till the Adult birds and the foreign Black Headed Gulls return. 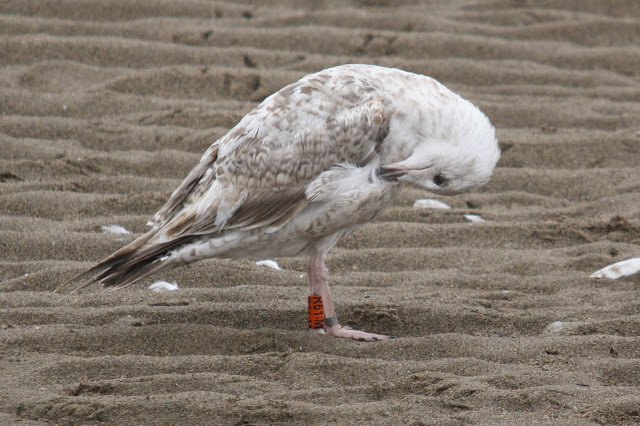 I am still waiting for Cygnets to stop hatching.  I am spending time mopping up the remaining sites. Delighted to find at Booterstown March 5 more cygnets less than a week old. This is family no 47.
The male has a metal ring, although I presume it is W27820 I didn't manage to read it and add it to the RAS totals - yet!

Mute Swan Nesting Census - Phase 1 is coming to an end.  Currently we are looking at 45 nest have produced cygnets.  This is up on last year, probably because of extra effort put in in checking out Golf Clubs.  It must be noted that the vast majority of Golf Clubs and Green Keepers have been most obliging and many are proud of the wild life on their course which is great.

It is also great to see cygnets at Broadmeadows.  This communal nesting site is not very successful usually.

There are still 12 known nesting sites that the out come is still unknown or eagerly awaited.  Typical of this is my trip to Santry today.  The male was out preening, but the nest site is no longer visible due to vegatation on the Island, so still I do not know if they were successful or if she is still sitting on the nest!

Any observations from the follwing locations would be apprecaited.
Black Rock Park, Herbert Park, St Margarets Golf Club, Red Bog lake, Bushy Park, Fagans Pub, Cross Guns, in fact as we move into phase 2 and observation are most welcome.

Phase 2 is the survical chart.  We look at how many cygnets survive to 12 weeks.  Already some Cygnets are 8 weeks old.  This is where colour ringing on the canals and rivers will make identifying families possible.

The pair of Mute Swans at Maynooth Train Station on the canal has hatched 5 Cygnets about 2 weeks ago as has the fishing club in Maynooth Fishing Lakes, although only 4 left today.  Carton House in Maynooth had no Swans today, so that location is also closed.

A trip to Ireland's Eye on a fantastic June day and what a day.  I had a plan in mind that went out the window with such mesmerizing bird life on show.  Who could not be distracted by the likes of Puffin, Guillemots, Razorbill, Gannets, Fulmars, Kittiwakes etc The list today was long.


But I had come to read rings!  And a call from Tom Kealy, who was out counting nests, said there was a CR Cormorant too far away to read.  Out with the big lens and yes, my first CR Cormorant.

Posted by Graham Prole at 14:49 No comments: