If it wasn't for the fact that the Cygnets in the local park run up to everyone begging, including me, I wouldn't have read a ring since my accident.  The Swan wars of Tymon Park are over but there was a Cob (Male Swan) missing. I have since been told that the missing swan was killed by the other Cob and that is how the Swan war ended. It is all part of nature.
I am looking at the moult progression of the various cygnets

First time out for a walk in 10 days.  Just half an hour, but far better than nothing.  38 Swans at Portobello, 78 counted in total on the Grand Canal from Tyrconnell Road, but that was counting from a car.  I will do more scientific counts when I improve.

I broke my arm badly earlier in the week and it may be 4 - 6 weeks before I use bins again, let alone my camera.  I was booked to talk to the Kildare Branch of Bird Watch Ireland on Thursday on the Mute Swan Projects, and not wanting to let them down, with the help of my assistants I gave the talk.

The talk covered the nesting projects and the cygnet survival totals.  I needed to publicise the coloured ring project and get people thinking about the Swans.  The Kildare Branch is very active and I hope they enjoyed the talk.  How well did it go?  I got good feed back and I'll see if I get sightings over the Winter!

Each day the Black Headed gull 27H0 appears it's continual improvement is noticeable.  Today its leg was weight bearing and although it walked with a limp the improvement is amazing. 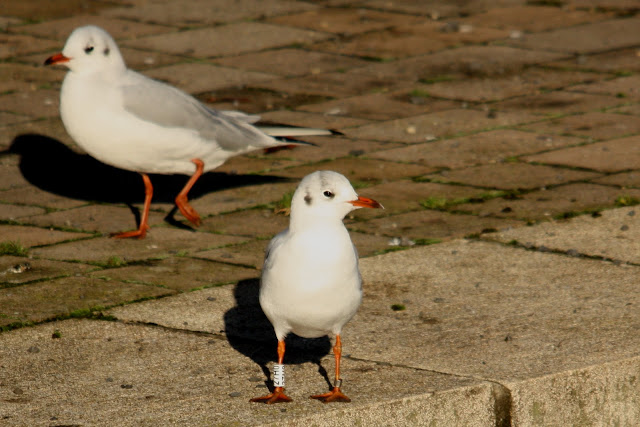 There were two new Mute Swans in the Park today, both unringed.  I didn't notice them at first as there were 13 in lake 5 as usual.  When I counted 2 in lake 3 and worked out which ones they were I went back and read all the Swans!

There have been few coloured ringed gulls mentioned recently in my blog.  They just haven't been seen and it is not for the lack of looking.  In Sean Walsh Park the only daily Black Headed Gull is the Swedish bird with a metal only ring

Last weeks "Swan Wars" have calmed down.  It was caused by the remaining family of swans from Ballycragh joining the Cygnet in Ballymount Park which had arrived a week earlier.  The dominant pair of that park, which had tolerated the arrival of the cygnet were attacking the parents continually trying to drive them away.  I headed over to Tymon Park where the pair and cygnets from the middle lake had entered the big lake and the two families were fighting.  In flew the Ballycragh family into the mix and there was a huge commotion.  The Ballycragh family were eventually driven out and  I tried to find where they went next - only to find them back at Ballycragh today!


What is probably most interesting is that the juvenile that had left 2 weeks ago is now back with it's family in the Park.  This is behavior I was not expecting!
Posted by Graham Prole at 13:58 No comments: