Really early start!  I was in Howth Harbour by 6.30 am.  Sunrise 7am.  There are moves to do a full gull count in Ireland so roost site information is being collected.  My aim was to roughly count what was roosting., but Howth Harbour is floodlit and when I arrived there were hundred of gulls circling high above the harbour and none where I thought they roosted!  By sunrise they were starting to settle on the usual buildings and many were roosting.  But they were all nervous and kept taking to the air for no apparent reason.  I will have to find if they were disturbed or if this is nornal.  Only three Irelands Eye darvics, but I was on my way home by 8am.

Early to Dublin Zoo this morning to see the new Okapi's.  At penguin feeding time, I photographed this Grey Herons BTO.  It also had a green ring which looked like it belonged to the Waldrop Ibis!

Stopped at Huston Station, as I had heard a Dutch Black Headed Gull was see there recently. 120 Black Headed Gulls, 3 Herring Gulls - no coloured rings.  I was at Bullock Harbour in the afternoon. Two Irelands Eye Blue rings 3HC + 1VA.  Again new-old, 50-50, 3HC was new to me and 1VA seen before.  So I carried on to Booterstown strand.  No Gull rings, so read 2 Oystercatcher rings instead.

A trip to Bullock Harbour when the tide was high can often mean nearly all the Gulls on the water.  This was the case today, but...... I saw one flying, watched where it landed and ran around. Another Isle of Man Darvic ring.  Only one ring today but worth the trip.
On the way home I stopped at the Royal College of Surgeons, in Sandyford Industrial Estate - there is always a big roost on the roof.
There was one Black Headed Gull with White Darvic.  It turned out to be another Dutch bird ringed by Frank Majoor.  His usual instant response means I already know it was ringed in 2009 in Arnhem and it has been seen twice before.  Interestingly it was seen once in Ireland before, on Duncannon Beach in Wexford in December 2012.

My boys insisted that we went to the playground in Sean Walsh Park this morning.  I walk this park Mon - Fri and now on Saturday again.  However, the Black Headed Gull 27H0 was there and later when they were feeding ducks I photographed two more Black Headed Gull regulars.  So three black Headed Gulls -
Norfork, Lincolnshire and Gloucestershire.

I went out to Malahide Estuary to photograph the metal ring on the Swan 5PT as I couldn't find a scheme.  I successfully did that.  The metal ring was huge with code on both sides.  I also photographed six other Mute Swans and reported to BTO.  If people put rings on them, then I will send in reports on them.
I drove to Howth and read three Great Black Backed Gulls and a Herring Gull Darvic.  All 4 were from Irelands Eye.  Like so many trips to Howth 50% of rings were new to me.
The Herring Gull below, OCP becomes more interesting if you look at the photo of June 15th underneath and see the huge change in Plumage in just 3 months!

The black Headed Gull 27H0 from Cemey Wick, Gloucestershire seems to be the only Darvic around in Tallaght this week.  I have nine other locations around Tallaght which I've scanned without even a metal ring.
However today I got some BTO reports of metal rings sent in recently

BLHGU Ring started with EH11***. This bird was ringed 17 June 2004 at Dove Holes, Derbyshire.  I suppose Manchester is the nearest big town. This makes it the oldest Black Headed Gull I have recorded at 9 years old. 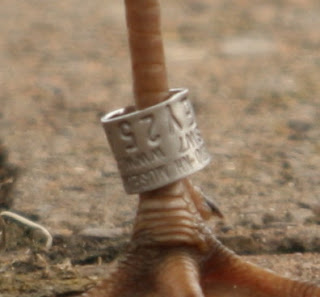 BLHGU Ring started with EY25***.  This bird was ringed 27 May 2013 at Baston Pits, Bourne, Linconshire.  The nearest big city would probably be Peterborough.  A Juvenile of this years breeding season.
Why do so many ringers ring upside down?  It makes so many of them difficult to read.

Common Gull 2ACV which I saw yesterday was indeed a Common Gull from Big Copeland, Co Down.  Many thanks to Shane Wolsey for his rapid response. It was ringed in May 2010.  Once again I received a "This is the first time the bird has been re-sighted since it was ringed!"  It is yet another scheme I can add to my winters in Dublin list.
The Swan White[5PT] is not Belguim.  The scheme is not listed on CR birding so any ideas welcome.

On the way home from a birding trip to Rogerstown Estuary, I stopped at Malahide Estuary for 20 minutes and what a 20 minutes.  Before I even stopped I spotted a Common Gull with a Blue CR Ring.  Camera out as fast as possible and photographed from the car.  It is one from a Northern Irish  Project and delighted to have captured a half decent photo.  More about this bird later. 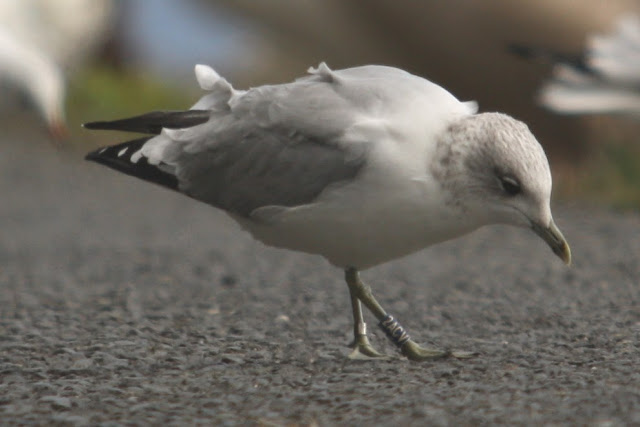 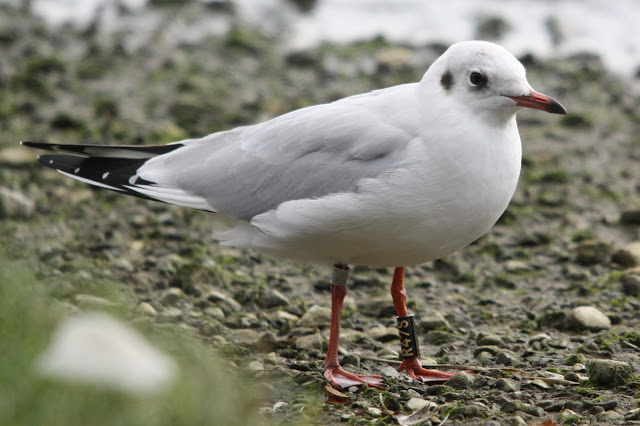 While watching the flocks of gulls, the Mute Swans chase you looking for food.  One mute swan had a CR Ring. 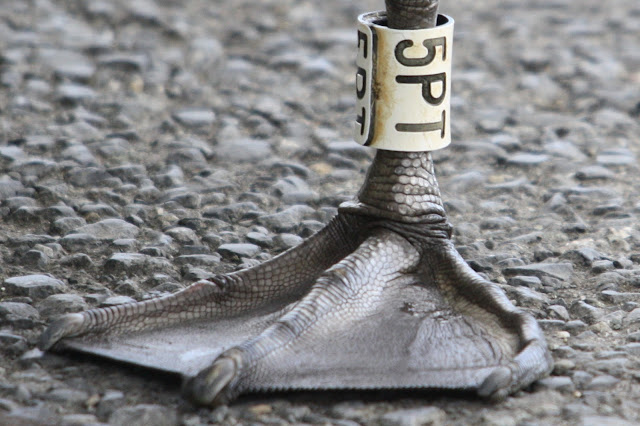 I haven't found a scheme yet for this mute swan, but the metal ring was a lot bigger than a normal Swan BTO Ring. According to CR Ringing it is from Belgium and have emailed them, but there has only ever been one other Mute Swan from Belgium in Ireland so highly unlikely. Any suggestions as to what scheme is welcome!!

There had been some rings during the week. The Black Headed Gull 27H0 appeared in Sean Walsh Park every day and occasional Black Headed Gull E5VA visited, but most of the sightings like these were re-sightings, of value to the ringing schemes but not very interesting generally.  Went ring reading at 5.30 this morning and sat at Booterstown waiting for sun rise. However the Gulls began leaving 20 minutes before dawn! I moved on to Sandycove.  Lots of med gulls (12) and again the only coloured ring was a re-sighting.  At Bullock the only interesting ring was 1NL.  I last saw this Great Black Backed Gull in Sean Walsh Park last April. 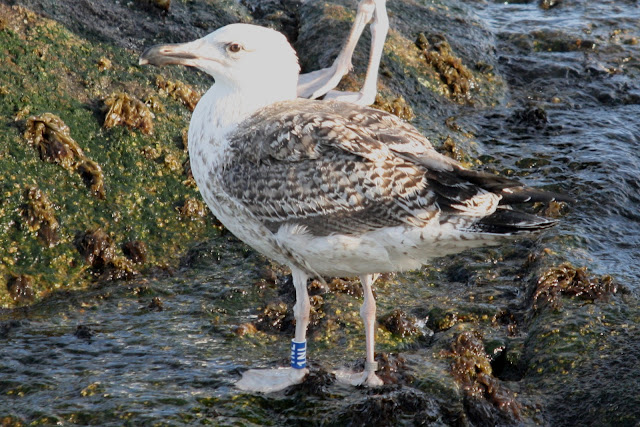 No coloured rings seen in Sean Walsh Park Tallaght today, but Bullock Harbour in the evening produced one.  The fantastic weather means the rocks on which the gulls normally congregate on were full of people, so there were hundreds of gulls on the water.  Still the Blue ring was again new to me. 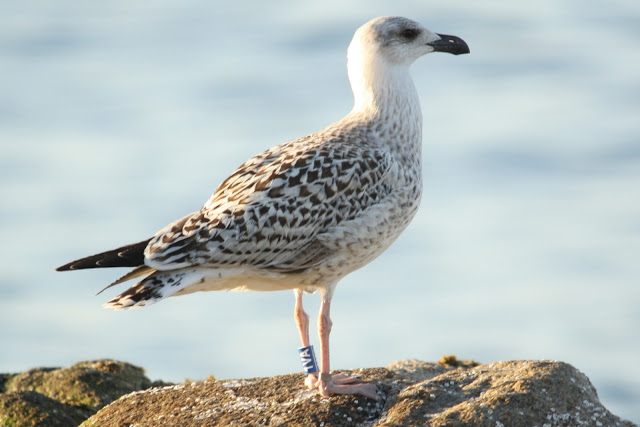 Sean Walsh Park is beginning to become more predictable.  Reading metal rings is always difficult, but I am getting fewer 'here for one day' Black Headed Gulls.  Today the number of Black Headed Gulls was up, as probably those that had day time roosted in nearby schools and sports fields were now being displaced as schools return from Summer holidays.  Black Headed Gulls 27H0 and E5VA were there as usual.


It always fascinates me how every time I go to Howth or Bulloch Harbour I see some birds I have not seen before, like this Herring Gull.   Today 3/9 were first time observations and only one of those was because it was ringed this year.
I also spent some time at Bull Island scanning the Black Tailed Godwits but with no luck.
Posted by Graham Prole at 12:56 No comments: