I stopped at Sandycove on the way home.  There were 22 Med Gulls which included 12 adults.  I could see 3 rings but too far out to get the codes.  I eventually got one standing up for long enough for a photo on X84 zoom!

A quick scan at Bullock Harbour to see if any of the recently ringed chicks on Dalkey Island had fledged.  The only red ring was 217:D.  That is an urban Herring Gull from 2018! 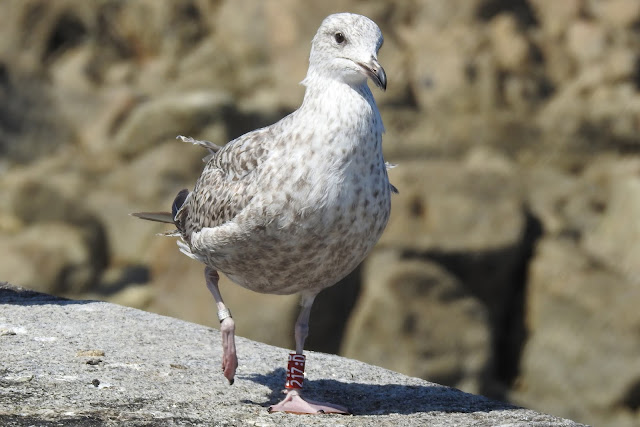 The only other colour ringed Gull recorded was Blue 2LH.  Although the photo is poor, I include it as I recorded it nesting on Dalkey Island last week.

My weekly walk this week took me to Irelands Eye.  I walked up to the Gannet Stack and back.  I checked the progress of the Shag nests at the top and colour ringed 2 shag pulli in the cave I checked.


I then walked back to the ferry.  Any large Gull Pulli were picked up and coloured ringed.  I also checked any adults perched on rocks and recorded ring numbers.


I recorded 7 coloured rings on Gulls.  There are hardly any non-adults gulls on the Island now, probably only one or 2 percent, and they are on the beaches as opposed to in the colonies.  Even though we have coloured ringed a few hundred gulls with red rings in 2017 and 2018 on this Island, as expected, none of these were observed.  These probably won't return to start breeding until 2022!

Another trip to Dalkey Island.  The chicks have grown and so another season starts!  It is interesting to see where they nest.  3CT was ringed as a chick on Irelands Eye, an Island 15Km north of Dalkey in 2013 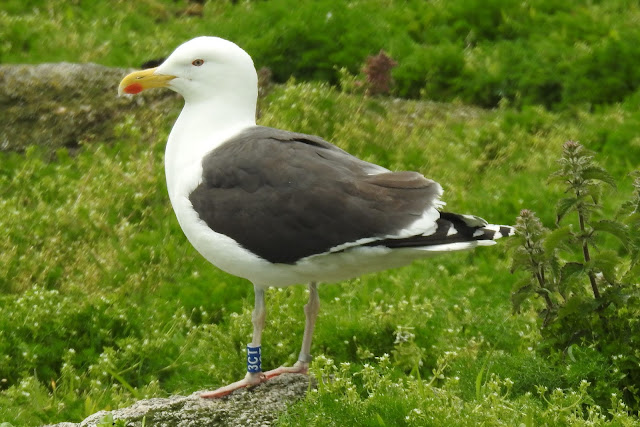 Trip to Howth this morning.  Plenty of Gulls but hardly a 2nd or 3rd year to be seen and none of our red rings.  Still I read 8 rings, 6 Blue and 2 metals.

Dalkey Island is only 0.5km off the coast of Dublin.  A five minute boat trip is all it is.  However, I had never gone there before.  I was looking for Coloured ringed gulls and to ascertain at what stage the nesting is. 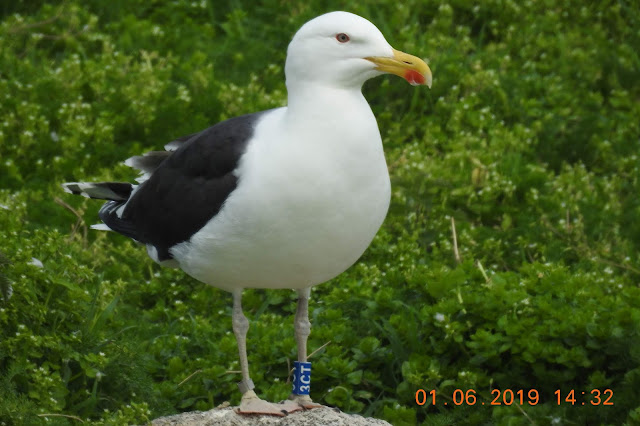 Only one coloured ringed Gull observed.  A Great Black-backed Gull ringed as a chick in 2013 on Irelands Eye which is 15km away.  This is only the 2nd sighting on the database.  The other is also my observation in 2014 at Bray Harbour, 7Km further south.

On the way home I stopped in Bullock Harbour.  GBBGU 2LH was present.  As was one of our Urban Gulls from last year, 217:D.  I see so few of our red rings.  I had a report from Northern Spain, complete with photo of a Dublin GBBGU during the week.  That demonstrates the maximum dispersal distance for the species at over 1,000 Km.

Posted by Graham Prole at 11:41 No comments: