2014 has come to an end and I must sit down and look at how my year of ring reading has gone, but instead I went to Broadmeadows and read some Mute Swan Rings and then onto Howth where I finished my years ring reading with 5 Great Black Backed rings.

Great Black Backed Gull 3AK was ringed in June 2013.  This was the first time I have recorded it! I know it spent last Christmas at Ballycotton in Cork.  Sean saw it back in April at Bullock Harbour but another new to me.


Great Black Backed Gull 1MC according to my notes is from the nest of 2012. That would make it a 3rd winter, although it looks well advanced in the moult for 3rd winter!

What a difference a day makes.
My plan was to look for my possible Larus smithsonianus, last seen on the 21st by going along the South coast.
Bulloch Harbour and today there were 6 med gulls and 1 coloured ringed from Germany, Sandycove there was a Black Headed Gull with a Yellow Darvic.  I started reading a metal and realised it was the same Metal Finland Ring as December 27th and moved on. 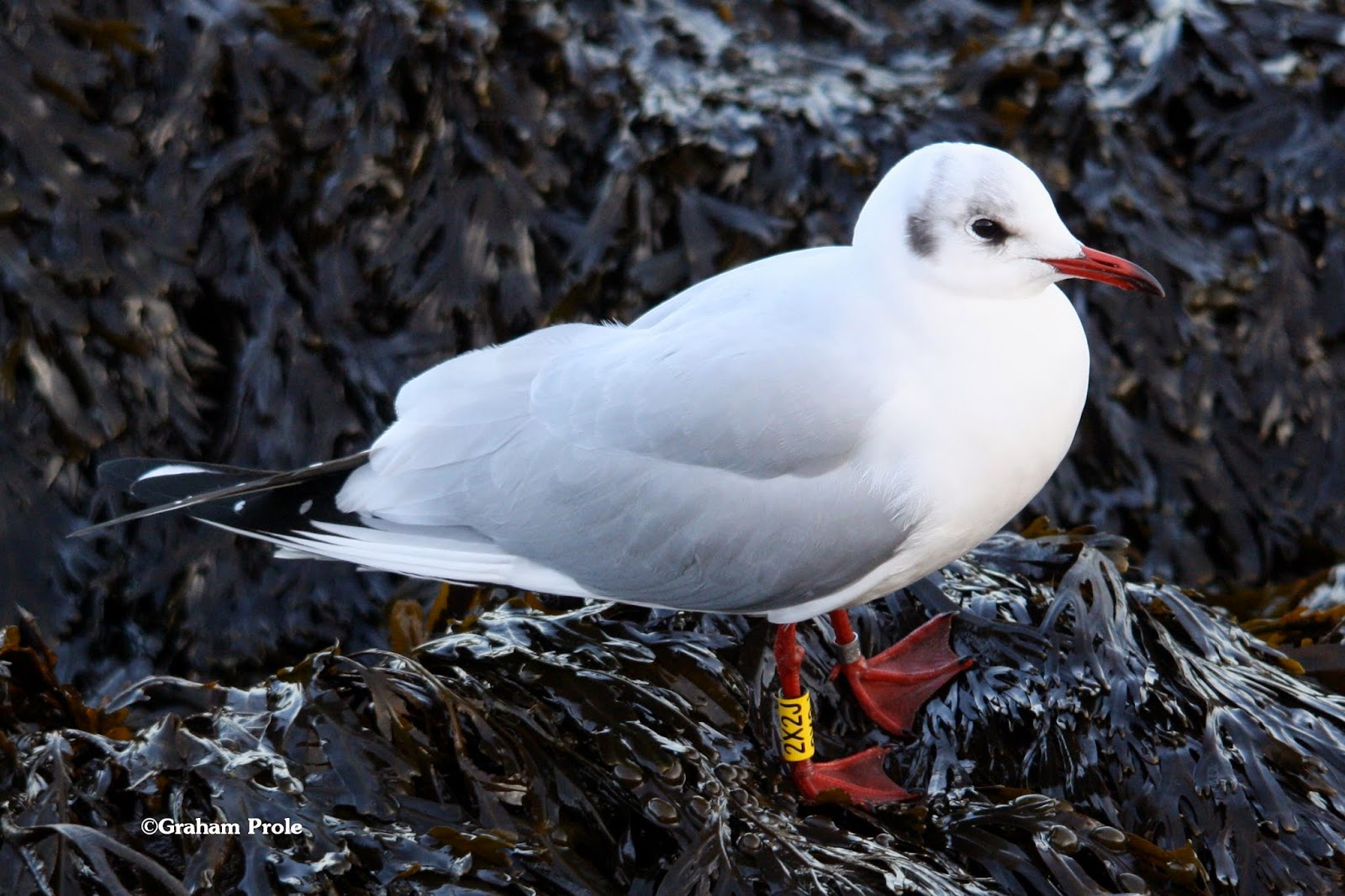 At the base of the East Pier another Med with a Darvic and then my bird of the day, a Juvenile Herring Gull from the Isle of Man.  It took a while to read it T4VV.  Excellent morning.  I will try again for my unidentified big gull, but it looks like it may have moved on. 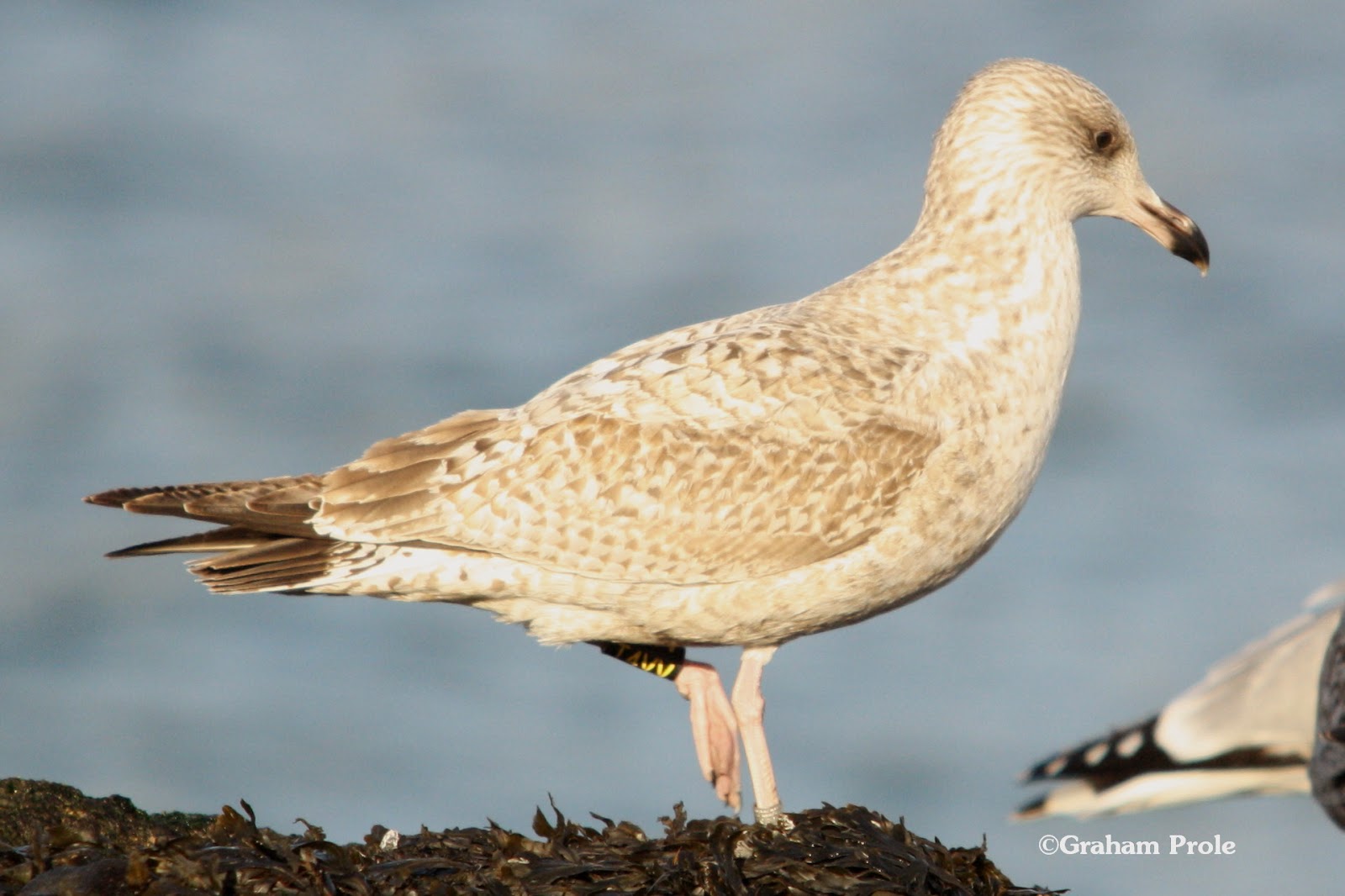 Where have all the coloured ringed Gulls gone!  Oh well gave up and went off to read waders.  The first time I scanned Booterstown Nature Reserve there was a Coloured Ringed Black tailed Godwit!  But it was standing on one leg - typical.  Yellow over off white, but that is only half the code! 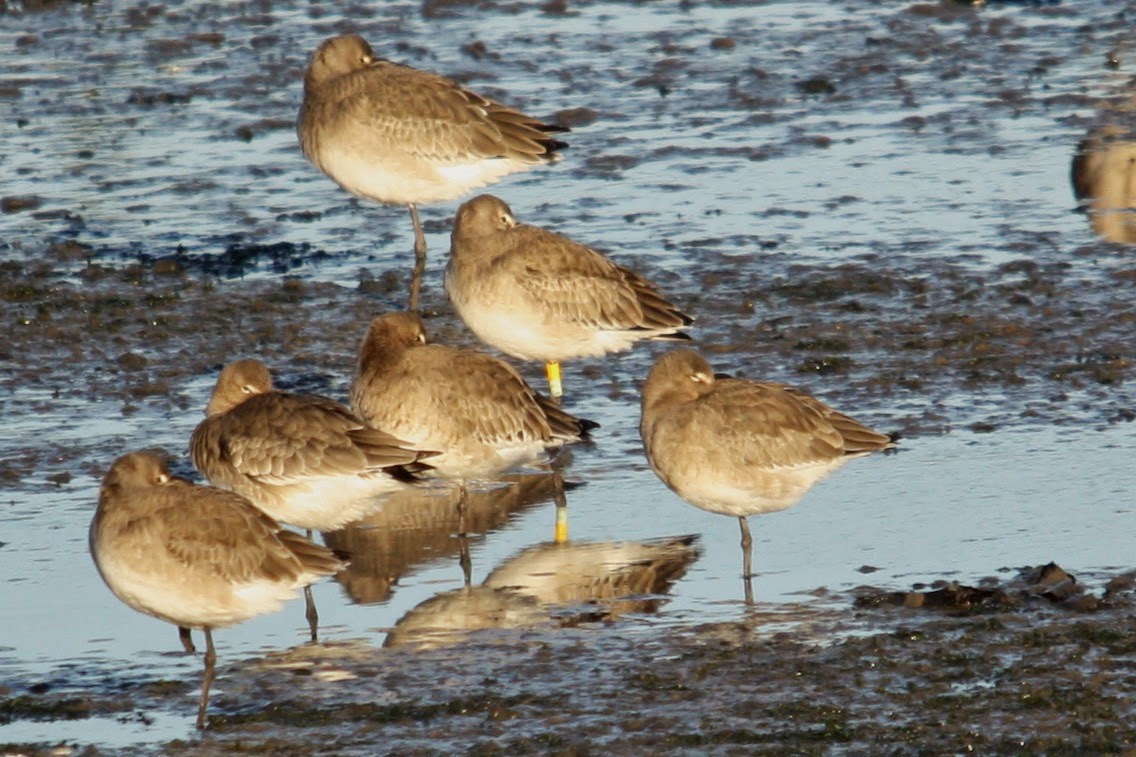 So I went off and read an Oystercatcher and a Brent Goose and came back.  The bird was now over the far side of the Marsh.  But Camera out again. 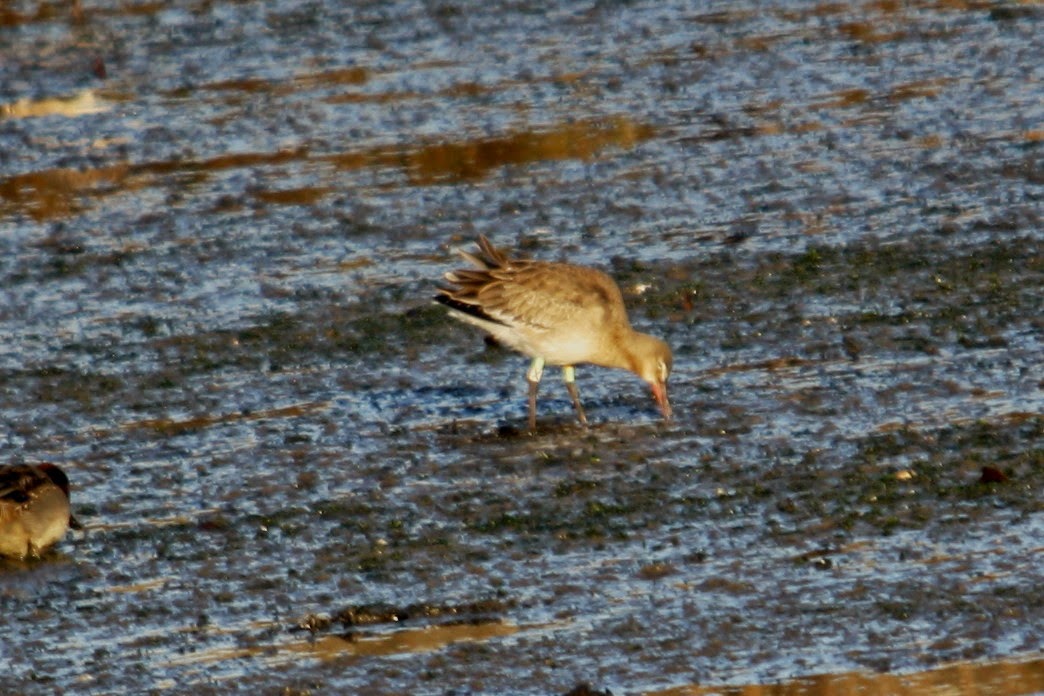 Yellow over Lime Green/Lime Green over white with X.


30/12/2014.  I have already had confirmation that it was ringed in Iceland, just awaiting a report.

No rings at Bray harbour, at Bulloch Harbour only the Herring Gull 0JH was present.  No coloured rings at Dun Laoghaire, although there were a few Med Gulls.  So I chose a black Headed Gull and set about reading its metal ring.  ST283.477.  It turns out I read this one before.

I am fast running out of metal rings that I haven't read before, I last saw this Black Headed Gull from Pori, Finland in November 2013 about 500m further down the coast! 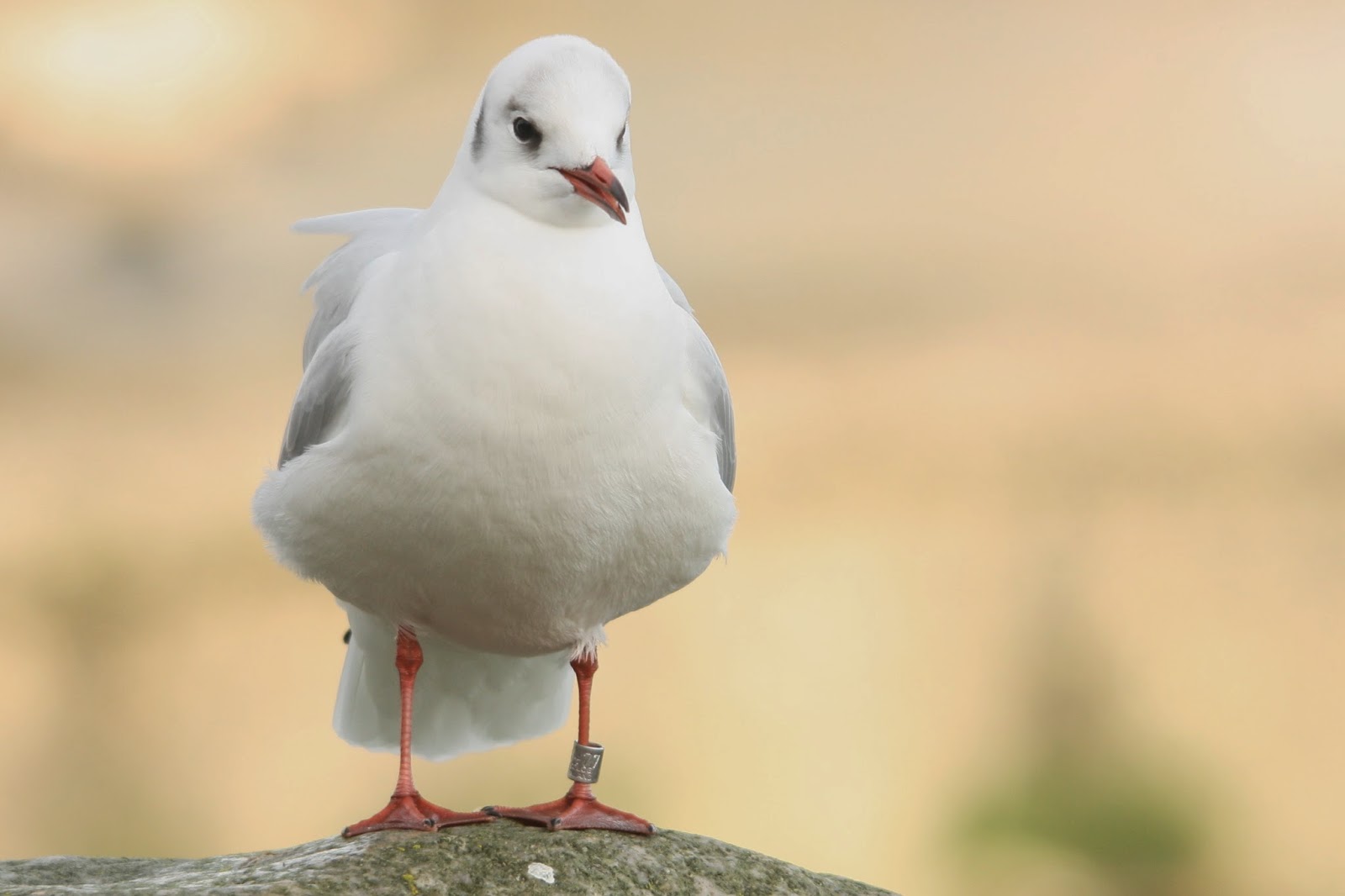 ID attempt
It is a very big gull but it has black primaries with white tips so I can rule out Glaucous.
So it is a large white headed Gull.  If fact it is very large compared to the Herring Gull in front of it but male & female Herring Gulls differ considerably in size.  It could well be just a male.
It has a few brown feathers which shows it is not quite Adult yet which doesn't help.
The streaking on head and breast is heavy and darker and extends further than the Herring Gulls.

If was to use "Collins" I would go for American Herring Gull, if I was to use Olsen I would go for a Vega Gull!  I have asked a couple of people who know more than me, but without a flight photograph all I am likely to get is an opinion as opposed to a definitive answer.  It may very well be an odd looking Herring Gull

What a week for recovery reports.  I got a 6 reports from Denmark.  A big thank you to Kjeld Tommy Pedersen. I also got post from Belguim (Belguim still replies by mail with a stamp) and two BTO Reports.

On August 24th I reported to the BTO a new Mute Swan in Bray Harbour - W21626. The report shows it was ringed in Arklow in 2006 by  Oscar Merne. The BTO classification for Mute Swans, is that recoveries over 40km are interesting.  Arklow is 45Km away so this is only my second interesting Mute Swan recovery!  I've now reported 50 individual mute Swans. (Broadlough in Wicklow to Swords Dublin is my only other "interesting recovery" at 53km) 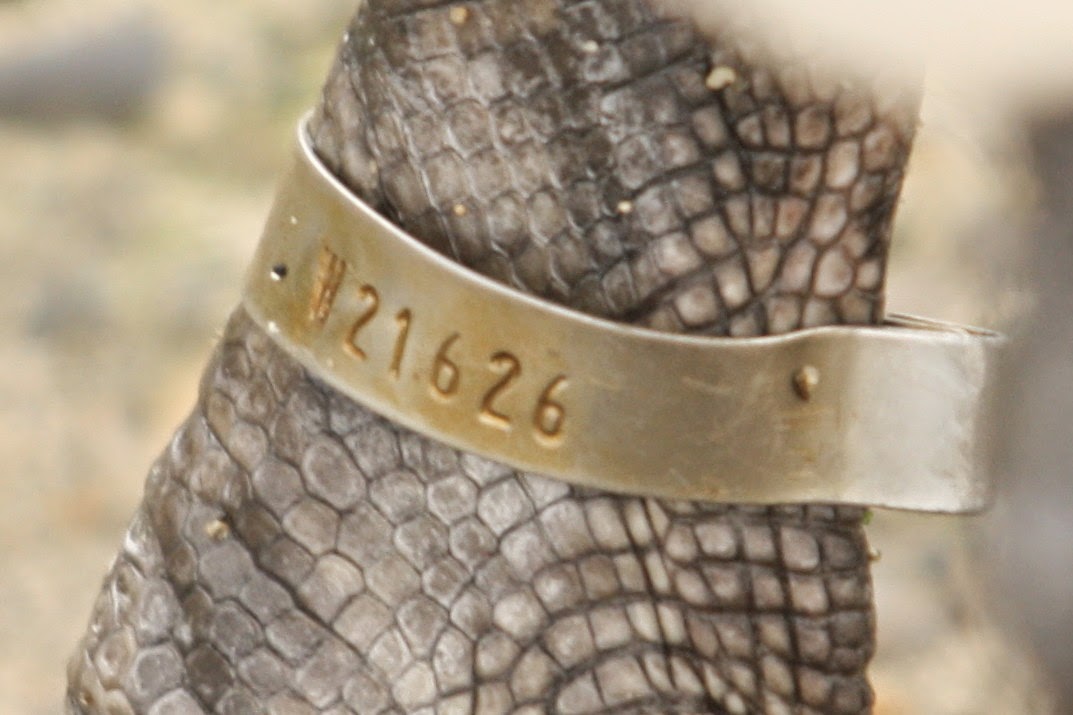 Lunch at Sean Walsh Park.  Black Headed Gull E5VA which turned up yesterday after 6 weeks followed me around today. First at lake 3, then 4 and even at lake 5 it was there!  Black Headed Gull 27H0 from England was present as always.  Just as I was leaving I saw another Darvic.  Black Headed Gull White[NUT] from Denmark was ringed in 2005 making it one of the older Gulls. Although I saw it first in the Park in  January, February March 2012.  I saw it February + March 2013.  It didn't show in 2014 until now.  I know it has been in Dublin as Sean has sighted it roosting at Sandymount Strand.  But back in Sean Walsh today! 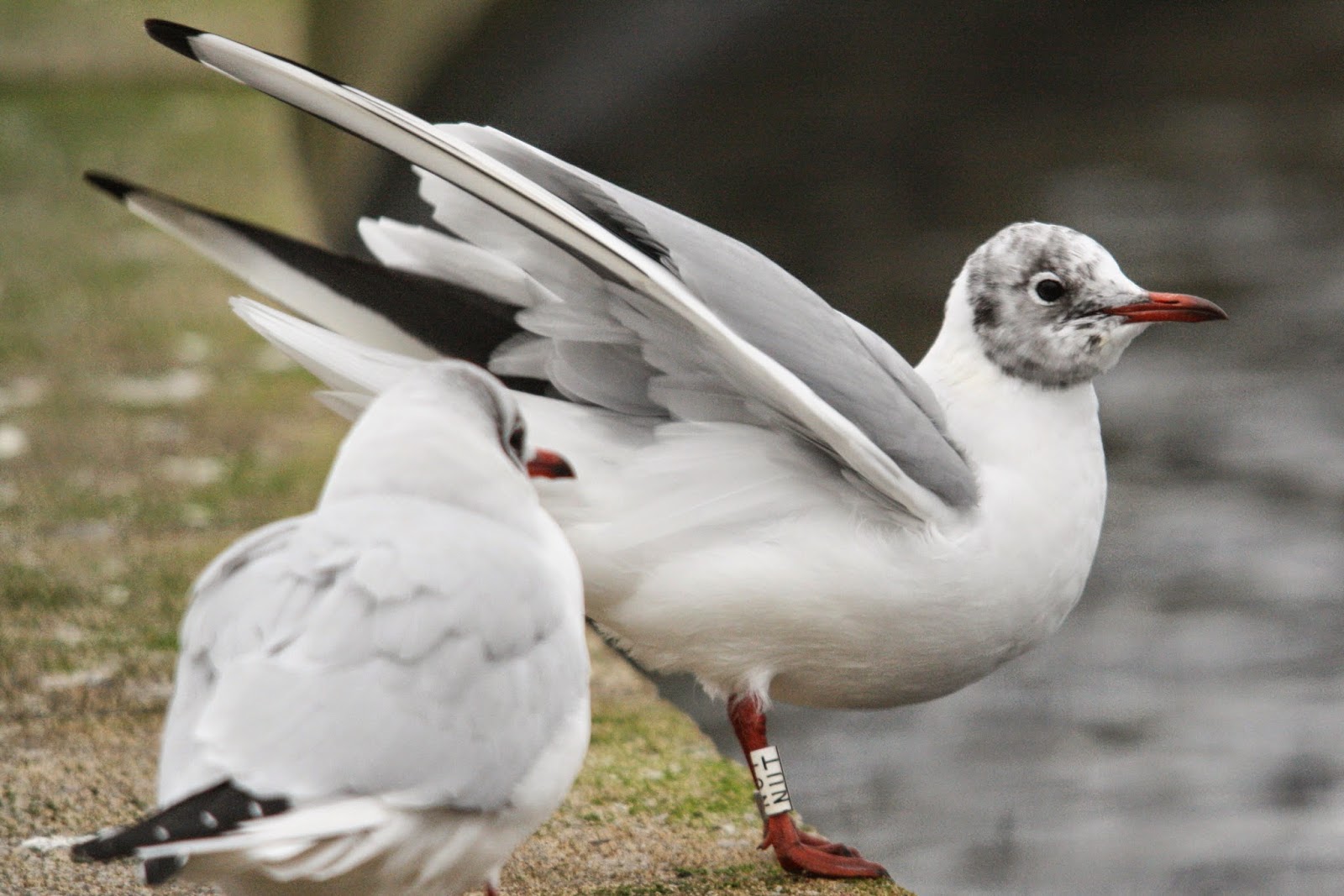 Lunch time at Sean Walsh Park and three rings on Black Headed Gulls.  27H0 from England, 6430814 from Sweden and EV5A showed up from Holland.  The Black Headed Gull E5VA has been missing since November 5th, so great to see this bird that I have been watching since a Juvenile in 2012.

While driving Past Tallaght Community School, I noticed a yellow Darvic.  I stopped and photographed Black Headed Gull Yellow[217G]K.  I have never seen this individual in any of the local parks but this is the 8th or 9th time over 3 years it has been seen on the all weather pitch.  I have written about this individual before, but it is from Lough Mask and one of a rapidly decreasing Irish breeding population.  The vast majority of the other Gulls are foreign wintering Gulls.

A frosty morning in Bray looking for Coloured Ringed Black Headed Gulls.  None seen.  The Herring Gull from Scotland was present - 3rd week in a row. 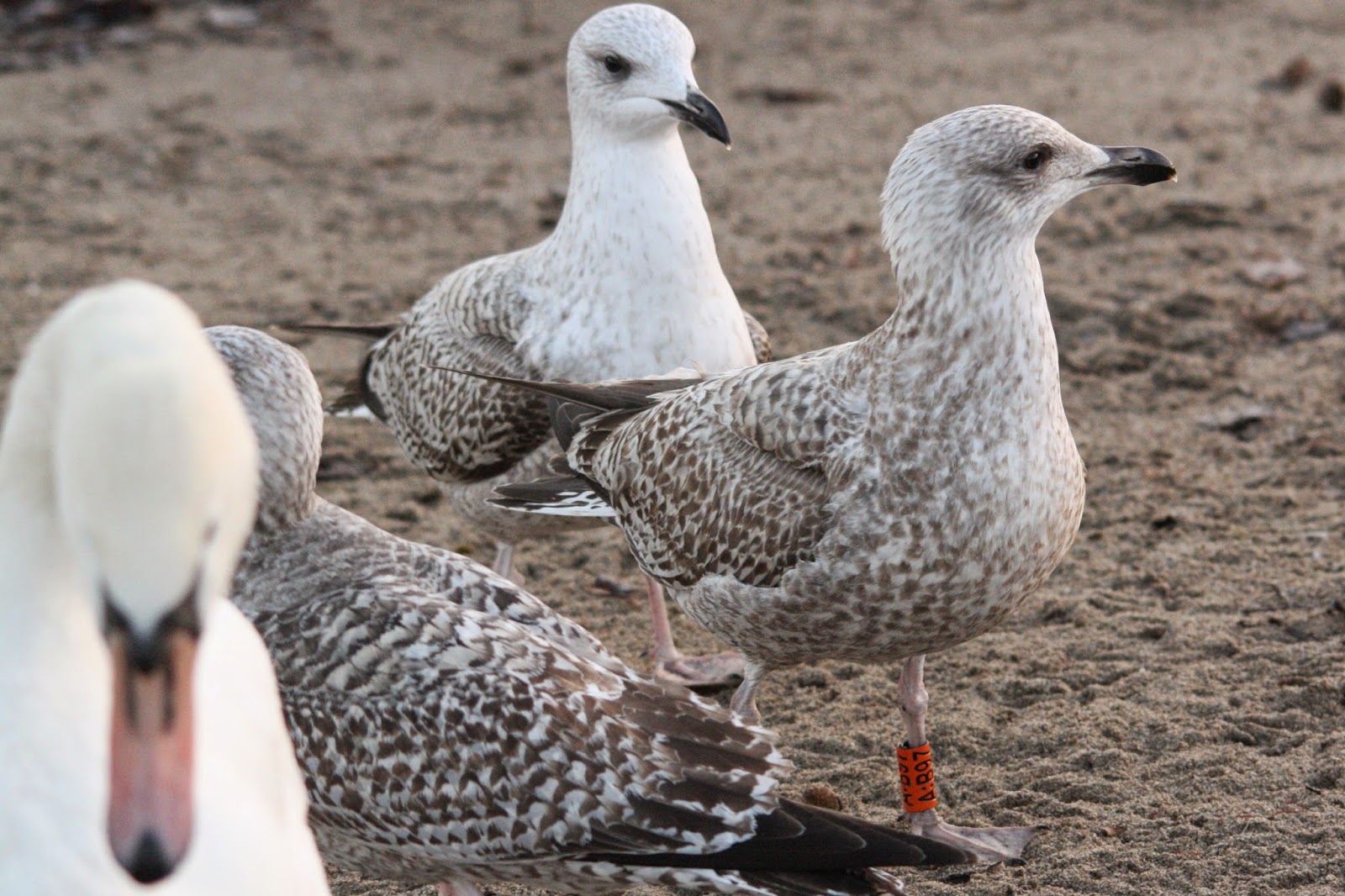 The Black Headed Gull from Denmark White[4ET] continues to be an anomaly by today turning up in Sean Walsh Park.  It is the only duel park bird I know also turning up in Tymon Park a kilometer away.  Last seen 29th November in Tymon Park.  It did the same trick last year.  The Black Headed Gull in breeding Plumage (- almost) was present and I got an additional 2 digits but it is very shy and doesn't come to bread!  Last year I had a late molting Black Headed gull with a badly worn ring upside down and all I got was *3602***.  This would make it 3602*397.  I would love to get the country 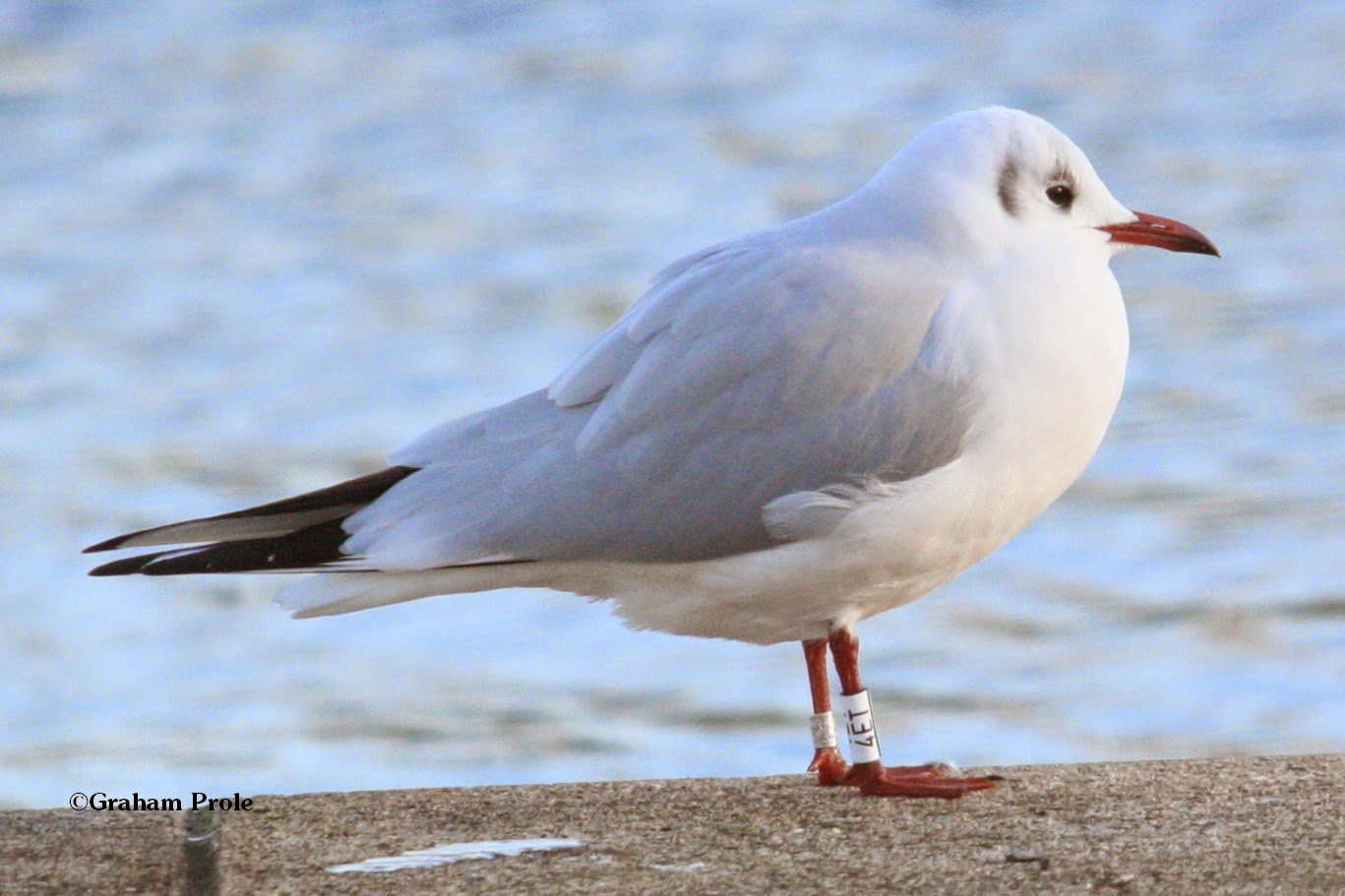 At lunch today in Sean Walsh Park, Black Headed Gulls 6430814 from Sweden, 27H0 from England were present (as always). 6J-4103 from Denmark had it's full code read for the first time this winter.  It may have been in the park up to now but metals are always tricky to read.  However, the Black Headed Gull in (almost) full breeding Plumage was hungry enough to come within 8 meters and I tried to read it's ring.  I quickly discovered it was upside down and reverted to Camera.  I only got 3 digits 397, and no scheme, but it stands out from the crowd. 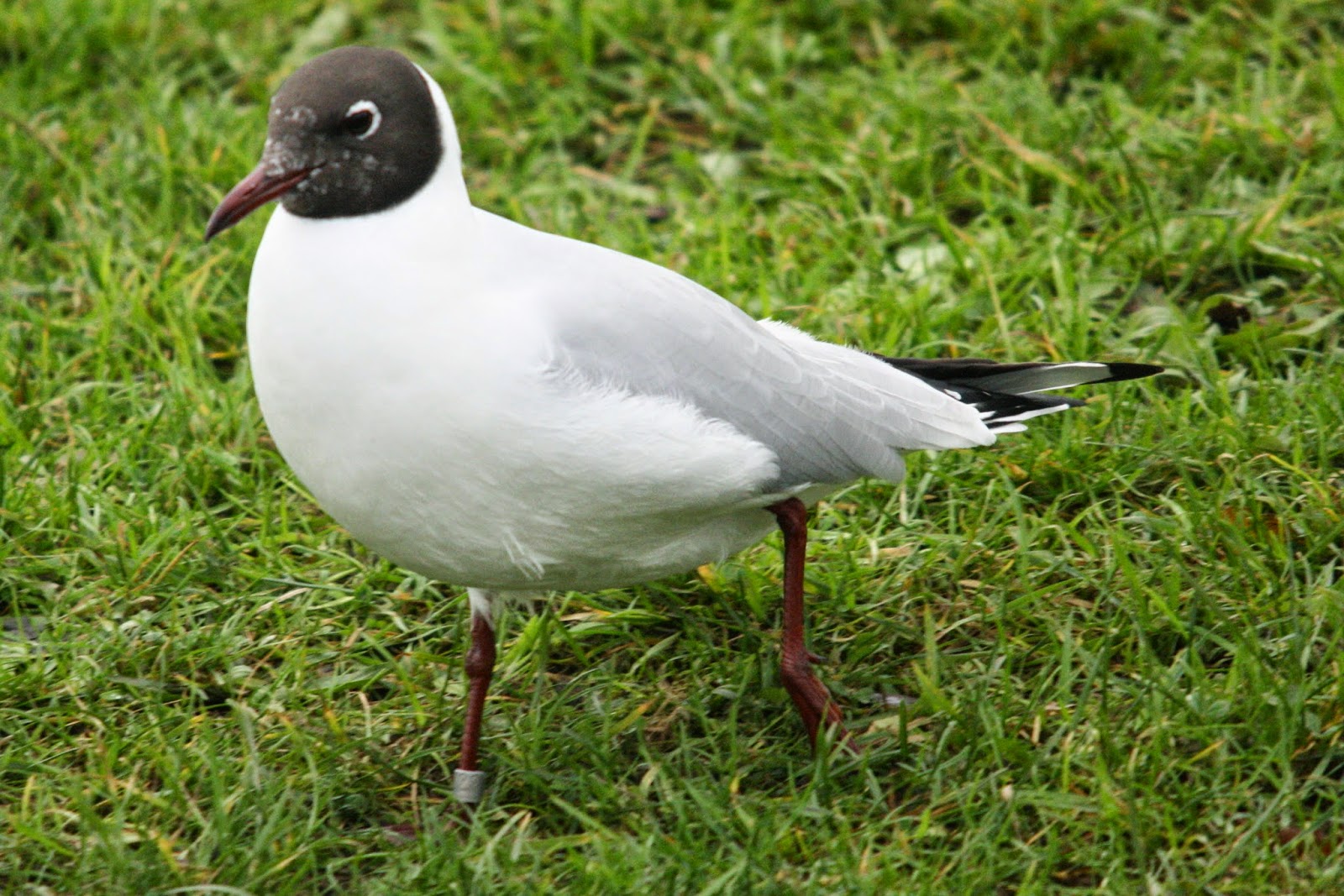 The north Side of Broadmeadows Estuary appeared to be closed this morning but at first light the Mute Swans were out near the kennels.  I read the four with rings but the gulls weren't coming in so I moved towards Howth.  There were Brent on the shore at Malahide but only one with rings.

I continued on towards Howth, not expecting much.  As I was passing Portmarnock I remembered that in November 2013 I had seen a Herring Gull on the roof of the Church.  I pulled into the carpark and there it was again!  Same roof 13 months later!


Howth did produce 3 Coloured ringed Great Black Backed Gulls, one Coloured Ringed Herring Gull and I read a metal ring on a Herring Gull, but no foreign Gulls


But on the way home I spotted a Black Headed Gull with a Darvic on teh foot path in Clontarf.  I stopped and got my camera and walked back.  It was still there.  It flew onto a nearby garage but I got the full code.  It was from Poland!  Saved be best till last.

I went to Bray Harbour at first light to see if the Black Headed Gull I saw last week VY42 was present and to get a record photograph.  It wasn't there!  The Scottish Herring Gull was still there.  It looks like it has gone this far south and is staying.  It will be interesting to see if it stays around for winter. 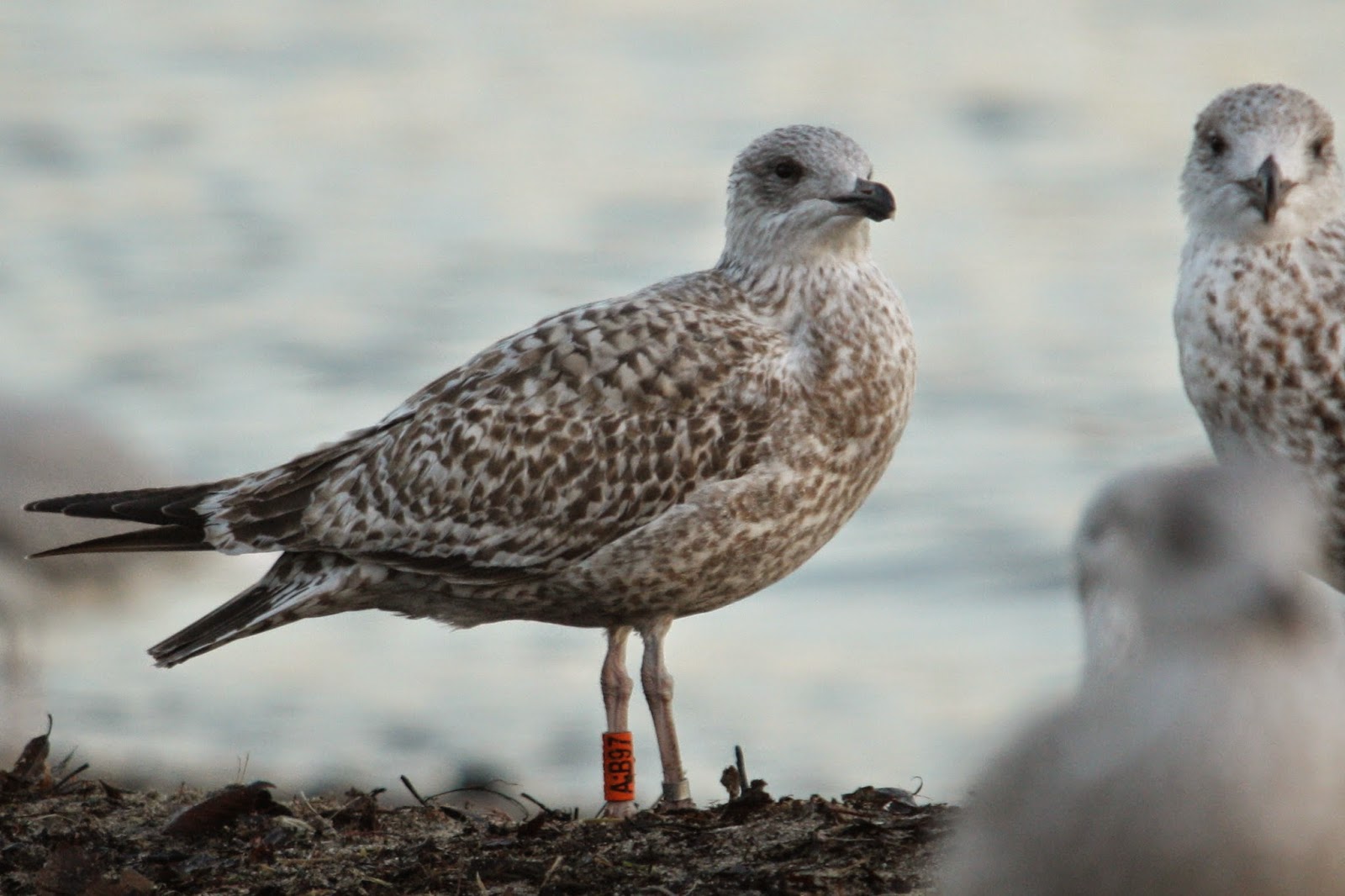 
For a change I went to Tymon Park, Spa Well entrance, to see what was around.  Plenty of Black Headed Gulls, about 80, but no coloured rings.  I did spot a metal and set about photographing it.

Eventually after 100 frames and throwing bread left and right to photograph the ring from all sides. The sun kept coming out the camera exposures were all over the place but I got the full code.  As I entered it into my own data base, predictive text showed it wasn't the first time I'd seen it.! I saw it on December 7th 2013 at the exact same location! Great to get repeat sightings 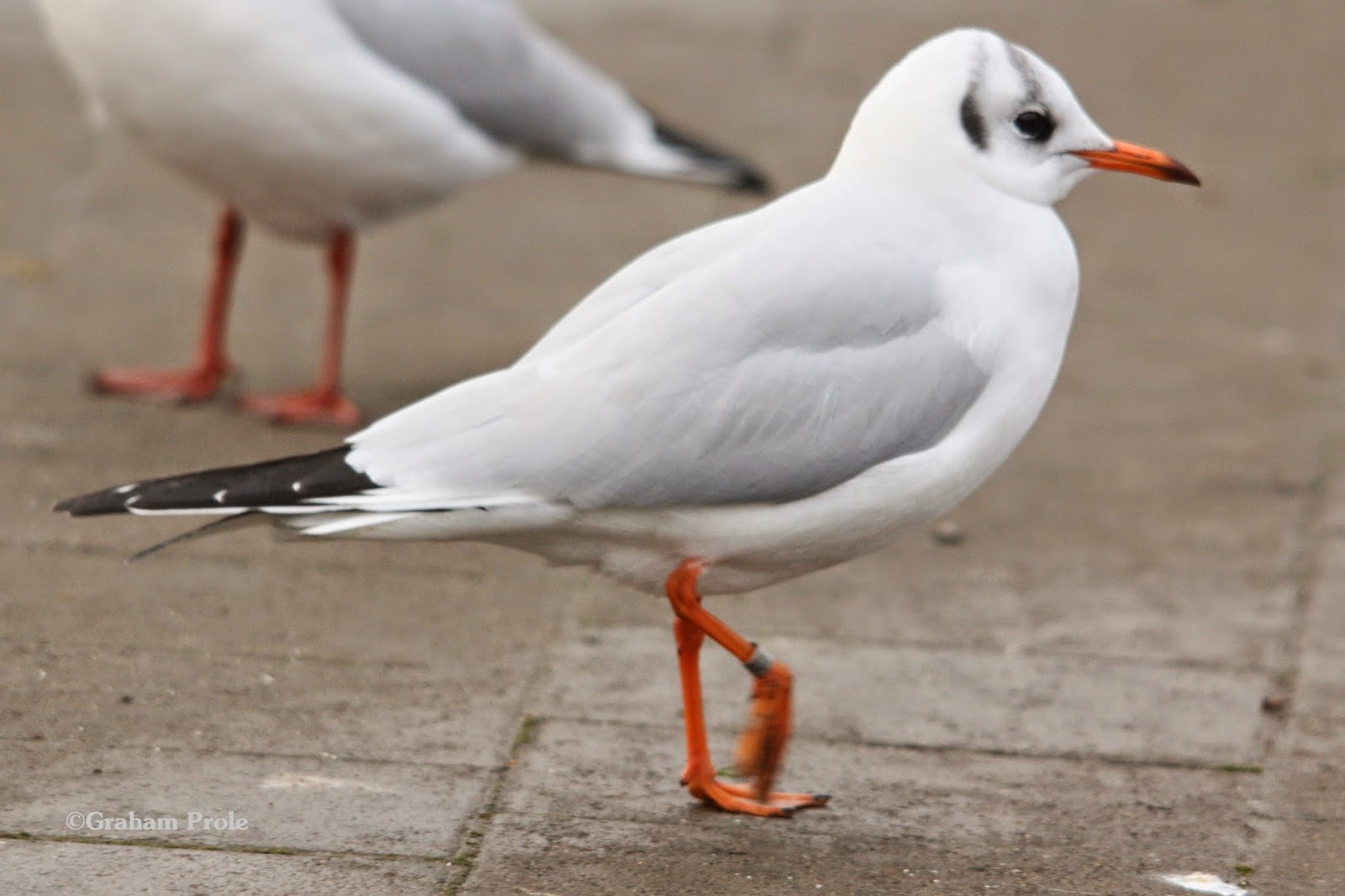 Posted by Graham Prole at 13:39 No comments: