In Sean Walsh Park, there were 2 Black Headed Gulls on Monday.  (I assumed failed breeder).  However by Wednesday the number had swelled to 210 with 6 Juveniles also present!  This means the breeding season is over and the arrival of wintering birds!  Hard to comprehend during a heatwave. 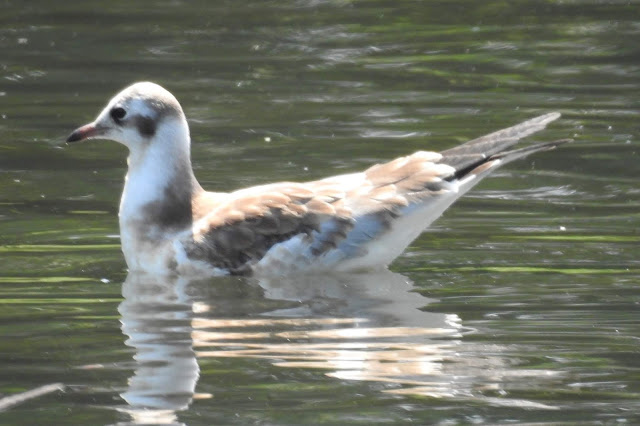 The Council are also draining the big lake.  There were over 200 Black-headed Gulls on the mud - but no rings yet this season.

In my local Park in Tallaght, Sean Walsh Park, Herring Gull 180:D was present.  The last time it was sighted was in Ardglass in Northern Ireland.  This is the first record of a juvenile that dispersed returning to Dublin.  It was ringed on Irelands Eye in 2017. 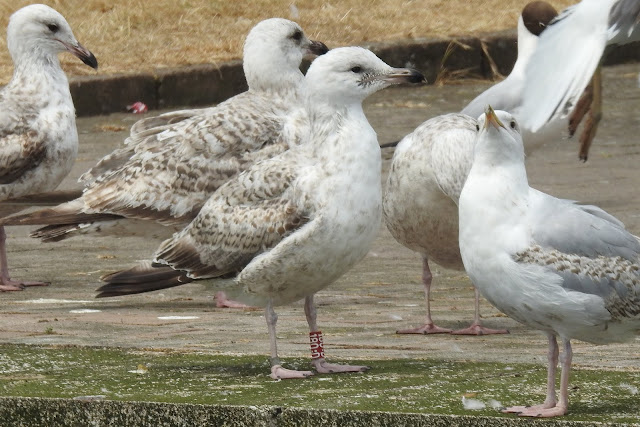 The purpose of the trip was to see how large the chicks were, but this Herring Gull surprised me as it is not one of ours.  Ringed in England in 2006 as an Adult.  It has been recorded there 9 times since but is breeding on Irelands Eye. 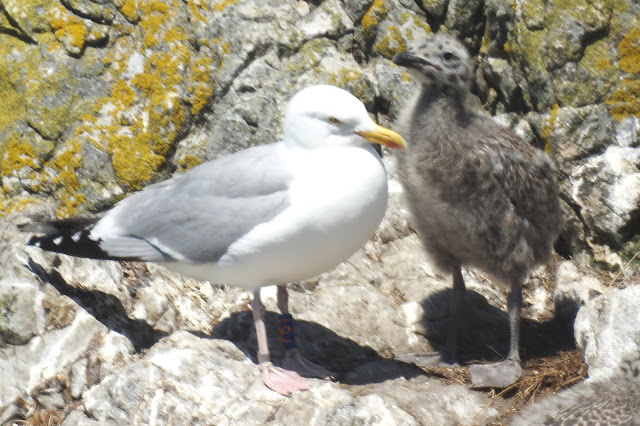 The Cormorant Colonies are not easy to observe but I recorded 2 Colour Rings.  I don't record many of this species. 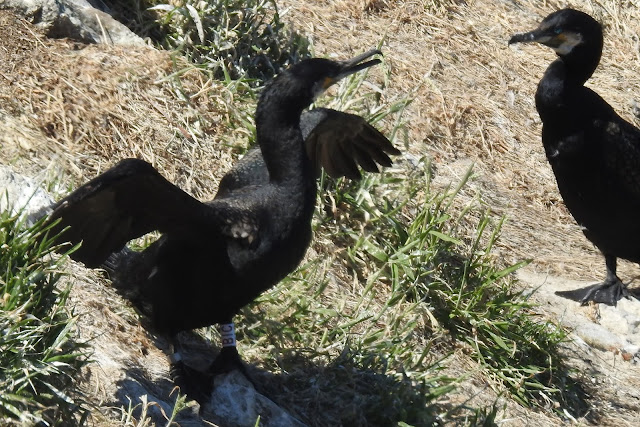 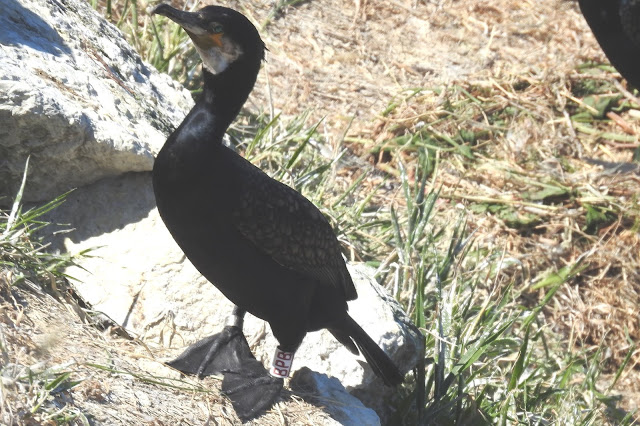 Where are all our Juvenile Gulls?  Last year we Colour Ringed 250 Juveniles in Dublin and I am observing and receiving sightings of very few in Dublin.  Last years Lesser Black-backed Gulls are still in Spain and Portugal with two sightings this week.  However, today at Grangecastle Business Park, I did spot a Juvenile Herring Gull, Red 054:D.  Ringed on Irelands Eye last year, it has been sighted only once before, by me, at the same location in February 2018.  I have visited the location about 20 times since then and it hasn't been around! 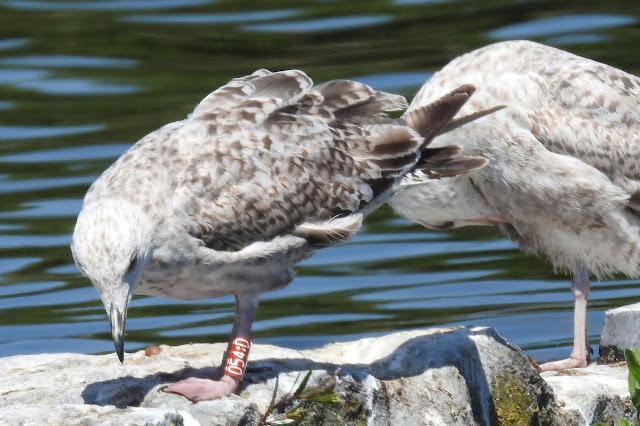 Slowly the nesting stage for the mute Swans is coming to an end.  Broombridge Station nest has 6 cygnets.  It was 2 weeks since I last saw the nest and they look about 10 days old. 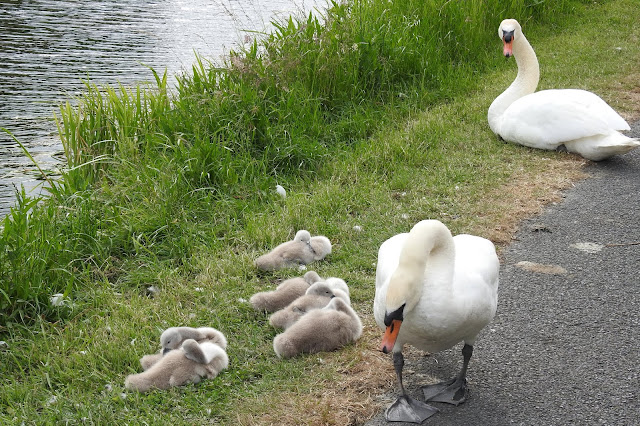 The Tolka Valley Park nest was abandoned last time I checked and the nest record had to be classified as outcome unknown.  However Vincent found a family of Swans 500m down river and the ring on the male confirmed that the 4 cygnets are from that nest, so another success.

I received an email from Niall last Thursday with a sighting of 8 Cygnets on the Tolka River at Annesley Bridge.  I was passing today and there are still 8.  Never found a nest on the Tolka but good to see a clutch of 8 doing well.  Both parents are un-ringed which makes me think it could be the pair that nested last year at Fagans Pub further up river. 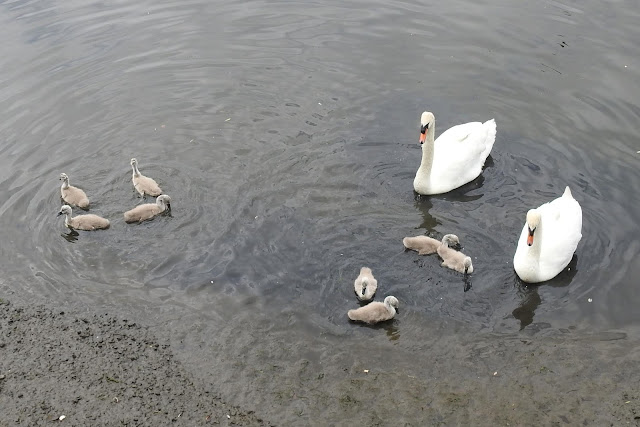 My local nest has finally Hatched.  As both parents only hatched in 2016 they are very very young.  So, Tymon North, 3 cygnets is now added.  Took a while to get a count as they were all on her back. 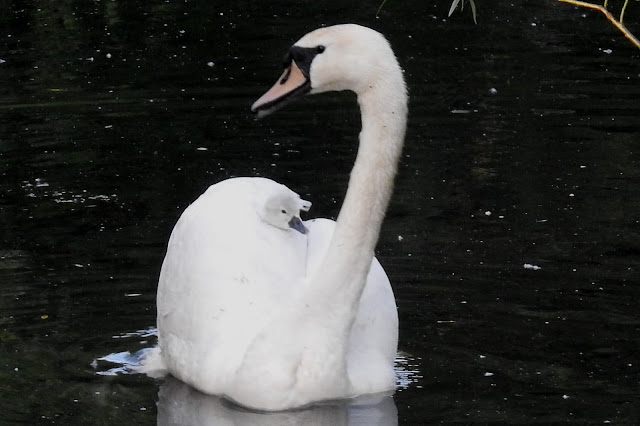 23.00 - Just been informed of 3 cygnets on Balcarrick Golf Club.  I will have to investigate and see if the parents can be identified

Received text that there are 7 Cygnets in Dublin Zoo, Africans Plain lake.  Great to here they were successful this again.  I will have to see if they are teh ringed pair or a different pair.

Following a report last night that the Grangecastle nest had hatched 5 Cygnets and 1 egg remaining, I went to check it out.  The last egg is abandoned and still 5 cygnets with the pen on the water.  The male is not doing it's job.  Over concerned with other Swans in the top lake, it is ignoring the Gulls and other predators near the nest.  Hopefully, she will do a great job on her own!

Difficult to work out what is happening here with 4 nests in close proximity.  What I can tell is that there was a Female with 6 cygnets under the Motorway bridge.  She is un-ringed which doesn't help!


I have walked many kilometers up and down the Canal banks.  On June 2nd there were Common Bluet Damselflies in abundance on the Grand Canal.  I rarely post anything that is not avian related but here is one photo!  (Male is Blue and Female green). 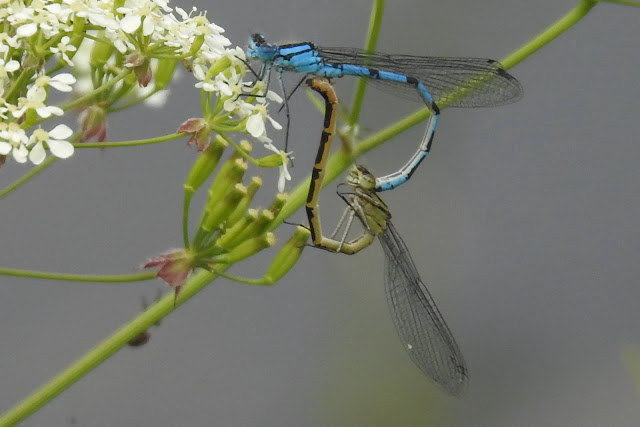 Posted by Graham Prole at 10:04 No comments: