A Herring Gull with our ring!

Howth Harbour, plenty of Gulls about but it was over an hour till the first ring was recorded and the 2nd the following hour!  So I moved on to Bull Island. 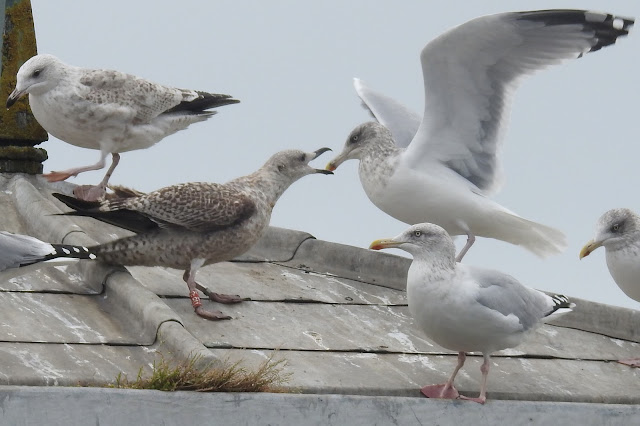 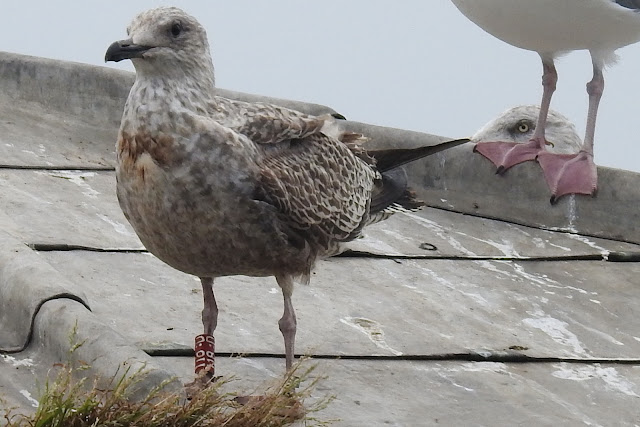 A the Bull, there were plenty of Brent Geeses to read rings as I walked along.  This was the most intriguing Gull of the day.  A Herring Gull with 2 un-coded yellow rings.  The left one appears to have a black line.  However, before I got to steady the camera it walked into the water so all I got were record shots from 60m.  If anyone knows anything about the origins of this Herring Gull I would be grateful.  It does match a scheme in Holland in 2000, but all other schemes also Metal ring. I have sent the photo to the Dutch Scheme to see if it is indeed a match. 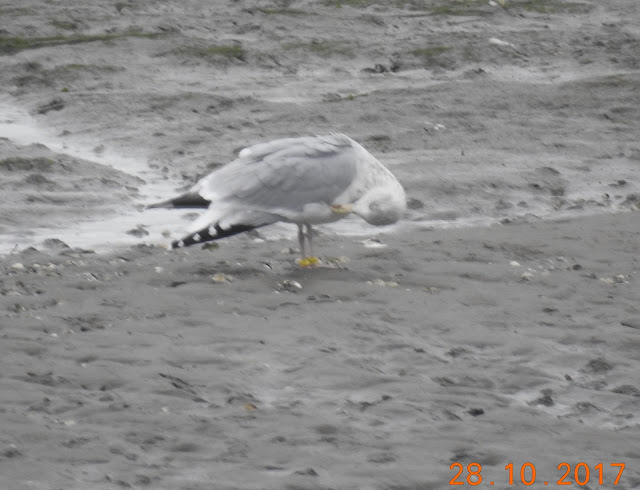 I did also spot a blue ring OJN.  Ringed on the Island of Irelands Eye in 2010.  I have not recorded this individual since 2014! 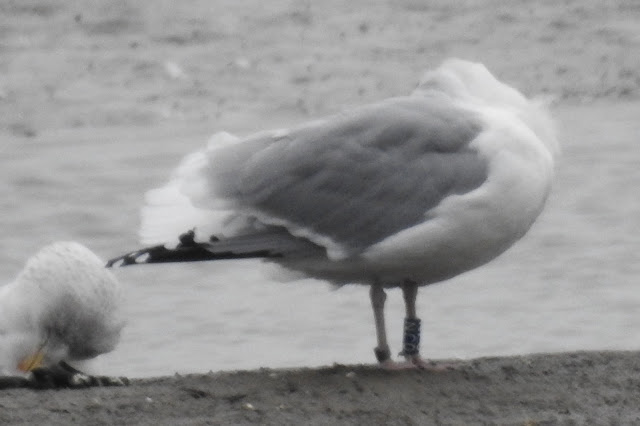 Eventually my persistence paid off and near the Causeway, I spotted a red Ring 074:D.  This is an Irelands Eye Herring Gull. 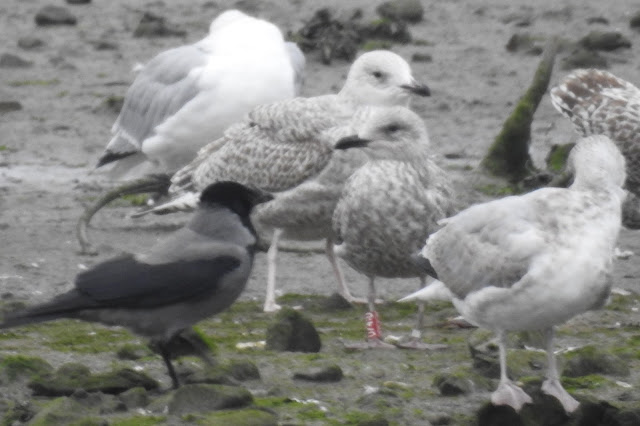 The Urban Gull Project means this year we coloured Ringed almost 250 large Gull Pullus this year in Dublin, but sightings have been thin on the ground compared to what I'd expected!  The Lesser Black Backed Juveniles have started turning up in Spain and Portugal (which is to be expected), but where are all the Herring Gull Juveniles?  Today in Sean Walsh Park, Tallaght, this individual appeared.  Ringed at St Vincents Hospital, at least we now know it fledged.

I finished my morning with a walk at Dun Laoghaire.  Quite a few Mediterranean Gulls but only 4 with coloured rings.  The Polish Mediterranean Gull Red [PRN6] is a regular as is the German Green [AKAJ]but the other two were new to me, although I know they have been recorded in Dublin before.

At Bullock Harbour, there were 3 Blue Rings, 2 x GBBGU and 1 x Herring Gull.  Where are all the juveniles gone?  It was 95% Adult birds!

This morning at Bray there were 17 coloured ringed Swans and 1 metal ring.  The metal ring was a surprise.  W21645 was ringed in 2006 as a 2nd year.  It has lost its coloured ring CAXJ!  It is almost a year since it has been last reported.  Now I know why!

At Heuston Station, there was one of our Urban Gulls preening on the Liffey. Red [016:D] 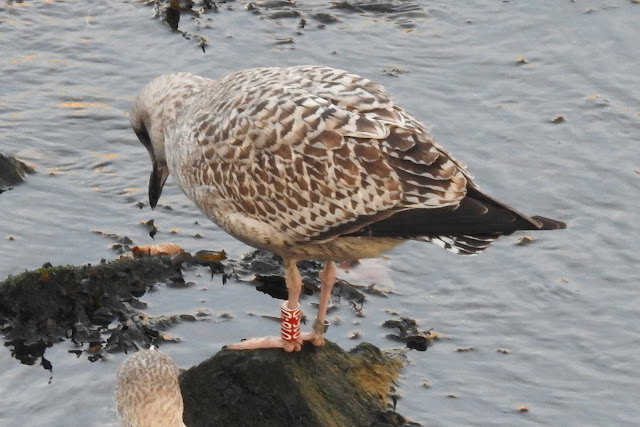 Sandymount Strand this afternoon provided a variety of CR Birds.  My bird of the day was a Norwegian Black-headed Gull. J41M. Another new to me BLHGU! 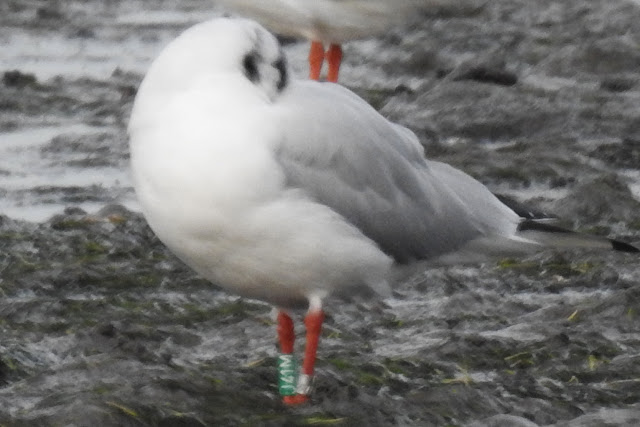 It wasn't the only Black-headed Gull ESVL was also re-sighted (Belguim).  I also read some Oystercatchers HZ, LF and PF.  I am still waiting for replies to my last oystercatcher submission in July, but I will send in the reports.


I read a couple of Med Gull rings but the the real indication of the time of year was there were 59 Brent Geese on the beach.  Great to see them back.  There were only 2 with coloured rings.  The photos aren't great on the beach but I am photographing from 50 - 100m as not to disturb the birds.  The photo of the flock below is cropped, so the fact that I can zoom in and read the rings, means the photography does sometimes suffer!

A wet and windy afternoon, but I went for a walk on Sandymount Strand anyway.  I spotted a yellow Darvic on a Black Headed Gull.  Through the rain it looked at first like the Lough Mask bird 217G, so I took some photos.  To my surprise the photos are of my first Black Headed Gull from the North Thames Ringing Group Yellow 2J76.  Ringed in Essex in 2017.  Another new Black-headed Gull for me! 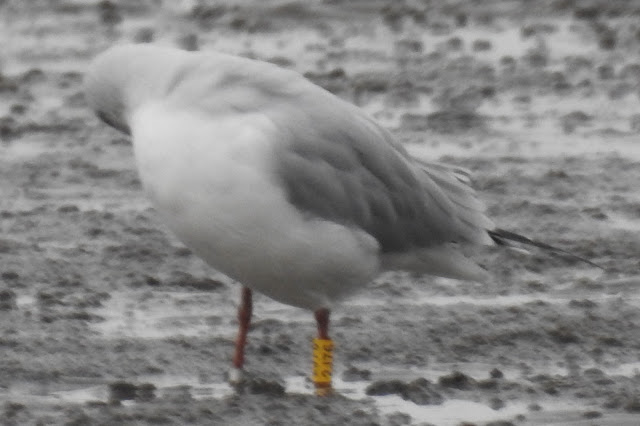 At Sean Walsh Park I spotted  a black ring on a Black-headed gull. It was another of the Brewood Ringers gulls from Birmingham.  I immediately assumed it was the same one that appeared last year as a Juvenile but I realised it wasn't.  Legs appeared too dark for a 2nd year.  Last year it was 2AHP, this year it is 2APA who dropped in.  Will it stay or just another passing through?  This one will be interesting in aging adults.

Myself and Tonya went out to Howth today.  We managed to read 12 rings between Herring Gull and Great Black Backed Gulls.  I was expecting the number of our Red rings to be higher that 4, considering we ringed 140 on Irelands Eye over the summer.  On Irelands Eye on out last trip, 1 out of 5 carried a ring.  Today it was 1:50.  The question is where are all these Juveniles coming from.  Maybe Lambay Island?

What makes ring reading interesting is where they come from.  The Juvenile Lesser Black Backed Gull 307:D is from an Urban nest.  It was ringed in the heart of Dublin City as a flightless Juvenile 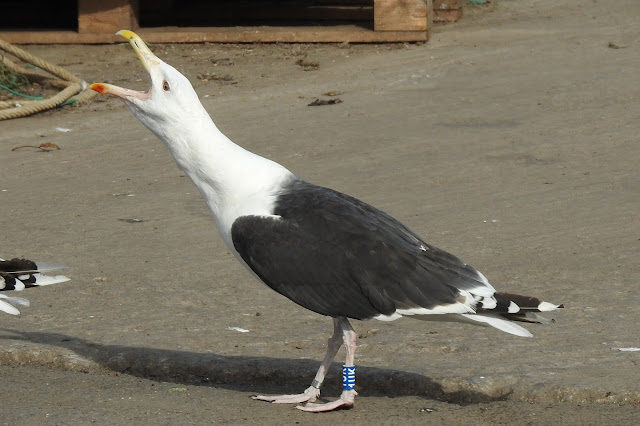 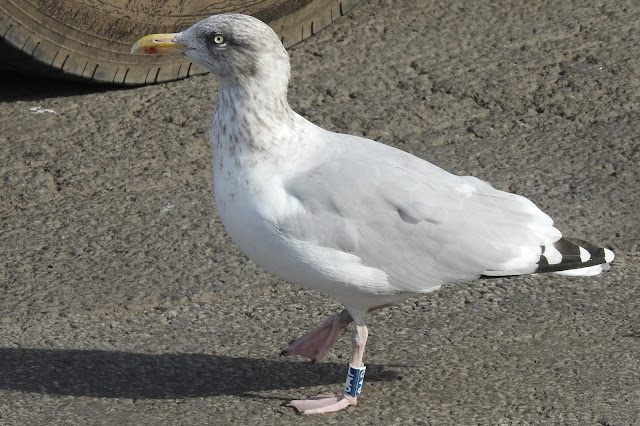 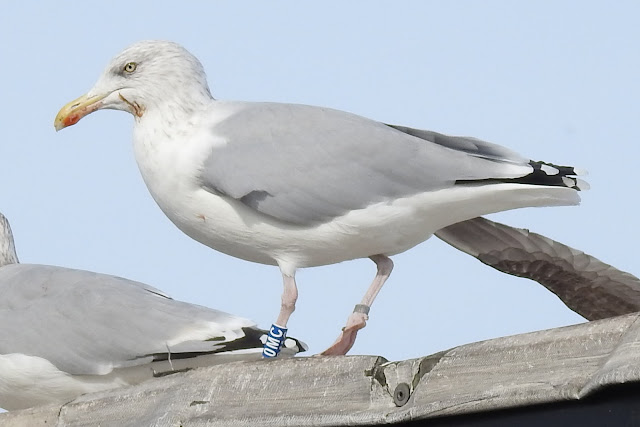 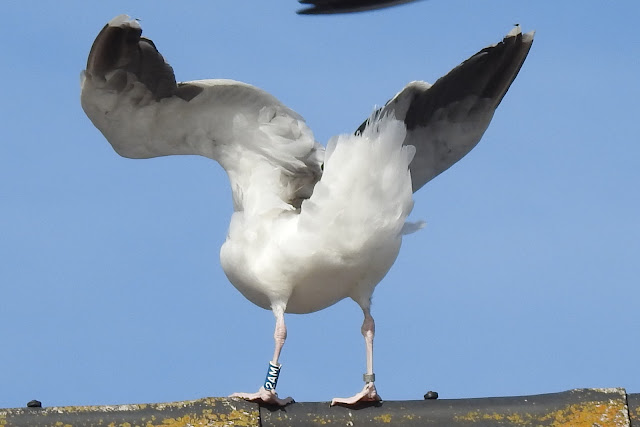 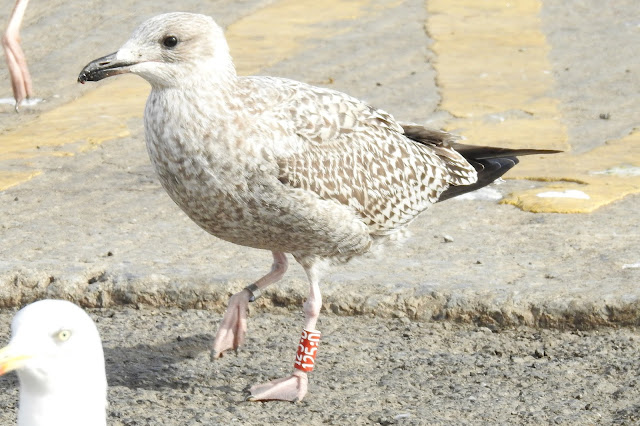 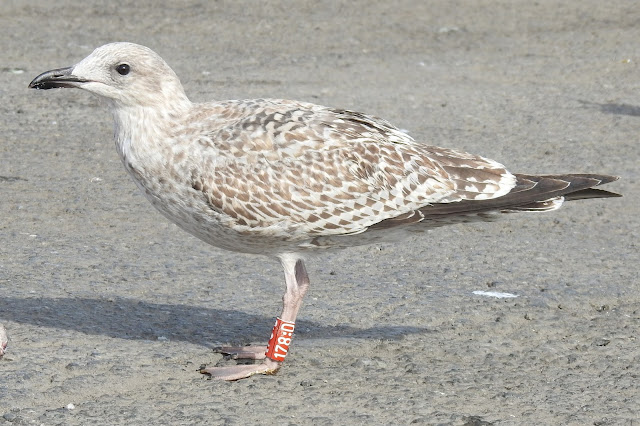 At lunch time at Sandycove the were about 20 Mediterranean Gulls and a Coloured Ringed Black Headed Gull from Norway.  This was my CR Bird of the day.  I had not seen this individual before.  It was caught and ringed as an adult in April 2017 in Norway.  It has probably been coming to Ireland since it first fledged.  SK has recorded it twice at the Booterstown Roost. Again the photo isn't great but it is cropped from a photo on Maximum Zoom.  (It was about 40m away!)

At Bullock Harbour earlier this morning a quick check showed 3 Great Black Backed Gulls with Coloured Rings.  1VV is a Great Black Backed from Irelands Eye, Ringed in 2013, but looking very much an Adult.  However, bill has both too much black, and not yellow enough.  It is  "Dirty around the Eye" which is also dull, not yellow, compared to the wintering adults.  I would also note it isn't black enough! 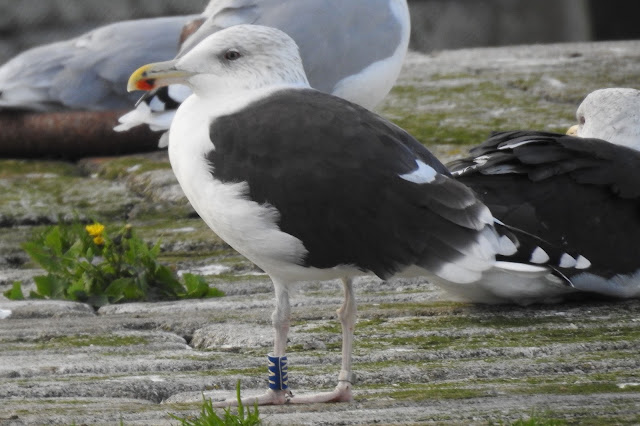 There were 2 of this years Juveniles, I was expecting to get more sightings than we have.  But all in good time. 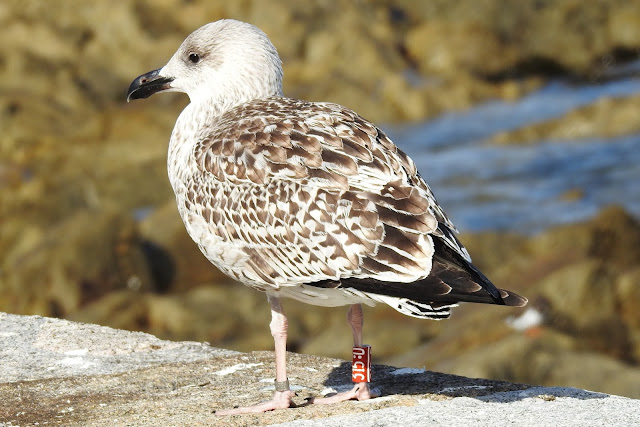 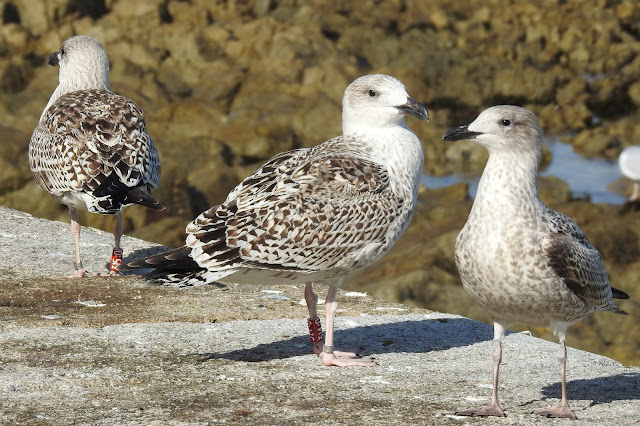