The answer to yesterdays question "Why hadn't I seen this bird before?" was option A. It was ringed only 66 days ago.  Just received verification from Poland.

During this summer I am down on the number of Coloured Ringed Black Headed Gulls recorded and not for the lack of effort.  Sean has already recorded 6 individuals at the Sandymount Roost where as I had only recorded 1 - in Sean Walsh Park.  However, when following up on the Mute Swan Nesting Census I was in Bushy Park.  There were only 16 Black Headed Gulls present and I wasn't surprised to see a white Darvic as J1N4 from Norway uses this park.  I was however surprised when I realised there were 2 Black Headed Gulls with coloured rings present! 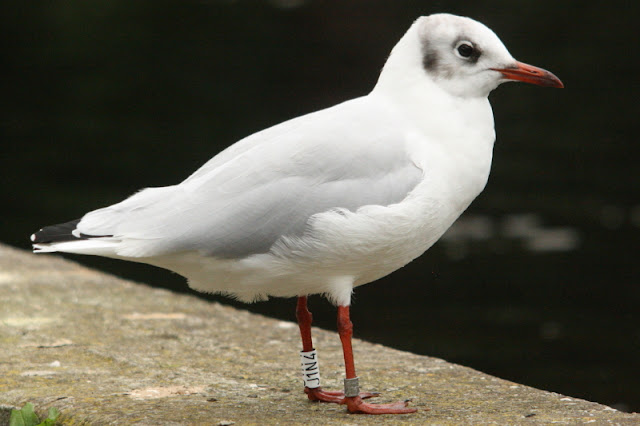 J1N4 is from Sweden and has been coming to Ireland since it was Colour ringed 5 years ago. 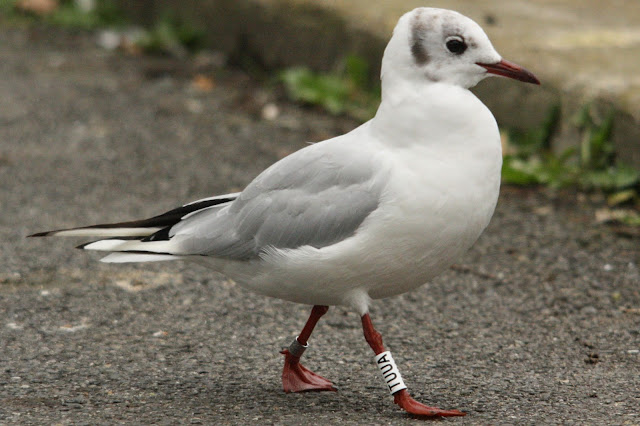 TUUA is a Polish ring.  As the birds are habitual there are a number of possibilities.

A. It was recently ringed
B. It is just passing through and I will not see it again.
C. It has changed it behavior

Having been observing them for a few years I am opting for A - Recently ringed.  I have inputted the data into the Polish Web site and I will know in a few days.

I gave a free walk and talk on the Mute Swans of Kildare for National Heritage Week.  The weather was awful on Saturday but it picked up at 3pm.  After I had talked about the Swans and what we are learning from using coloured rings, with 6 other ringers we hand caught and ringed 11 cygnets and the remaining adult that we missed last year.
Then came the torrential rain again and we retreated for Coffee at (where else would we go) "Swans on the Green"

I was back at Bray Harbour to check on the recently Colour Ringed Swans.  They were again gathering to be fed by passers as usual.  I recorded 24 rings only 12 of which were ringed last week. There are still 30+ without coloured rings at this location and another ringing session is required. 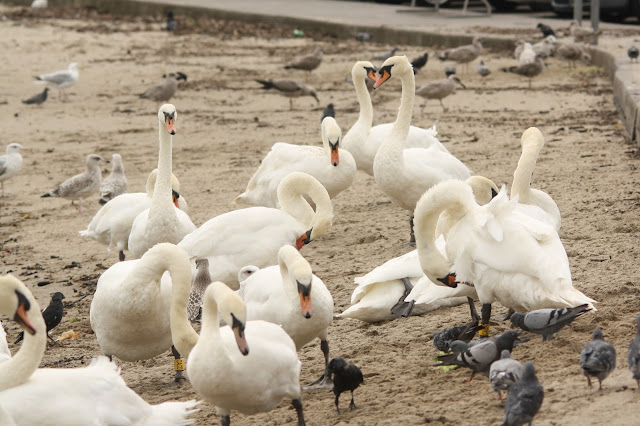 This morning we had a very successful Mute Swan Ringing session at Bray this morning with 18 more Swans added to the Coloured ring project.

On the way home at Sandyford Industrial Estate I stopped to check for CR Mediterranean Gulls. There was only 1, 2XA5, but I also spotted a Herring Gull from The Isle of Man. 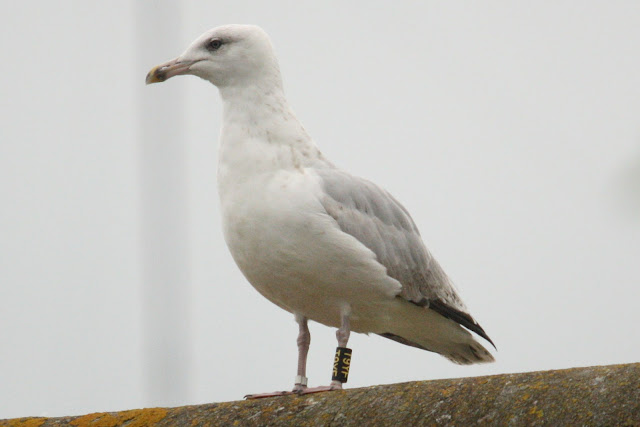 Sandycove yet again.  This time I was inspired by the fact that CR Sandwich Terns have been recently recorded there - no joy today.  However 61 med Gulls and 6 Coloured rings.
The photos may not be great today but the birds were 30m away. 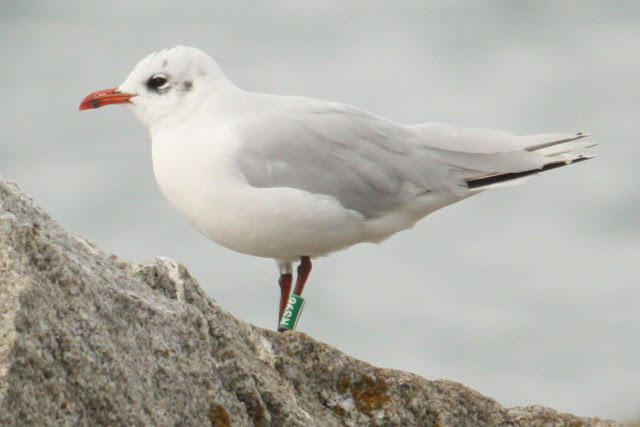 Plenty of Sandwich Terns, Juveniles and adults but no Coloured ringed ones today.  Quite a few metal but impossible to read metals 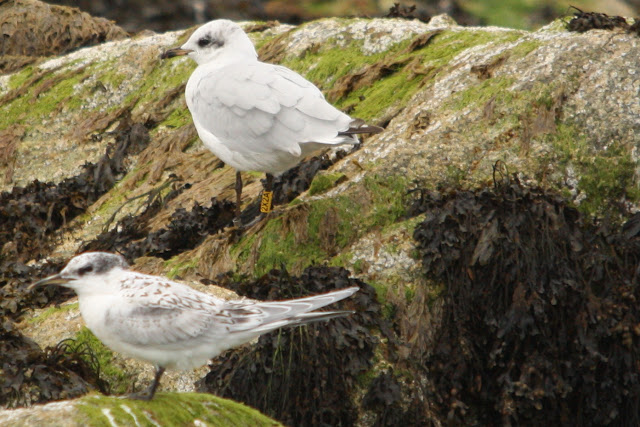 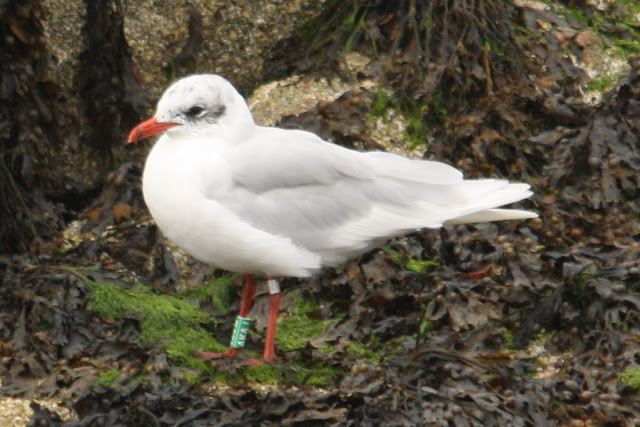 Sandycove again on the way home from a Swan Recce.  You can never be sure what Med Gulls will be around.  Some are just passing through and only sighted once or twice a year.  Today among my new ring readings for the season was this white ring.  The ring is well over 12 years old and from Belguim. 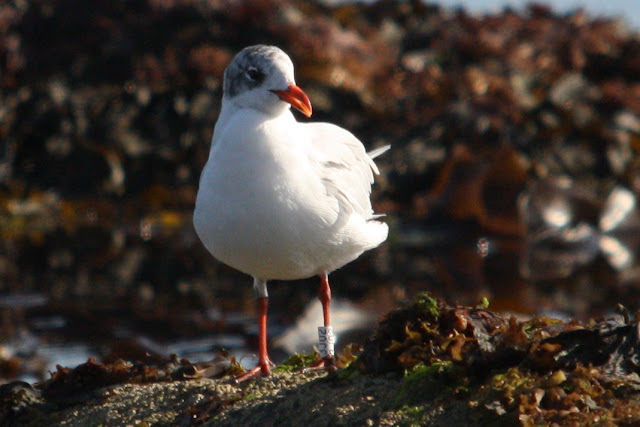 Sandycove.  Only 31 Mediterranean Gulls present.  It is great to watch the moult of individuals progress. See July 9th for another photo of RJN5! 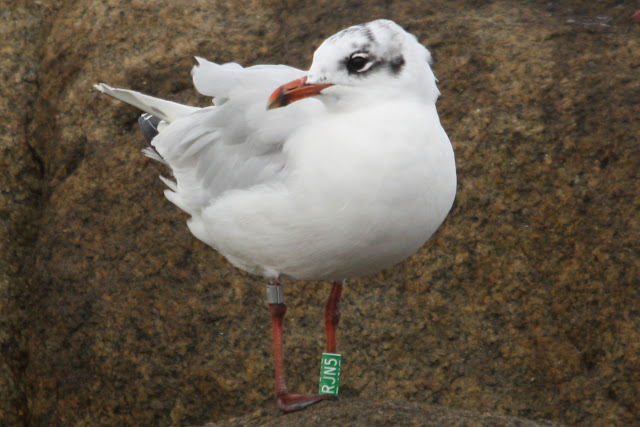 However my bird of the afternoon was yet another new Med Gull 2XA8.

A trip to Howth Harbour to see what large Gulls are still around.  Only read 4 Coloured Rings, but great. 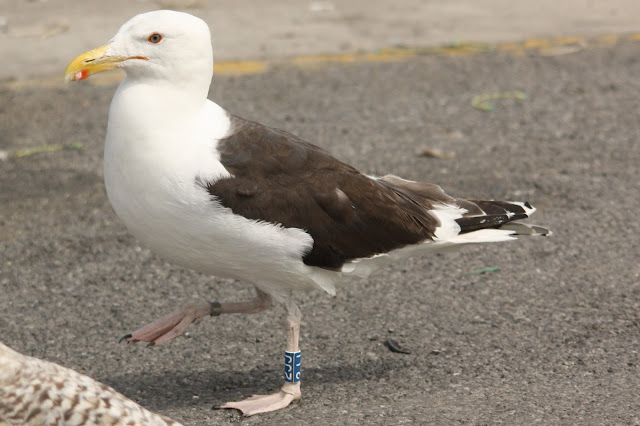 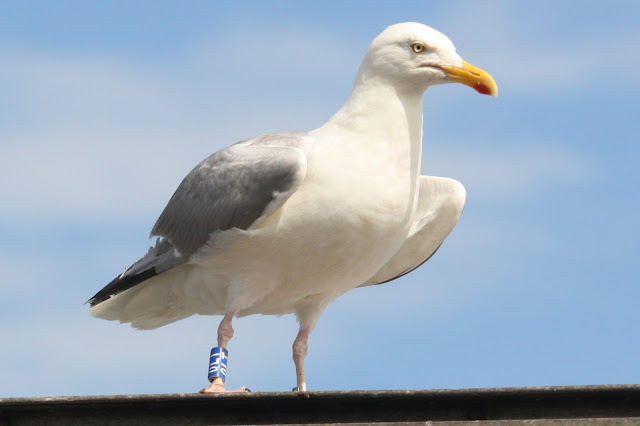 In the Parks of Tallaght there is still only the one CR Black Headed Gull so far.  His dark hood has faded quickly. 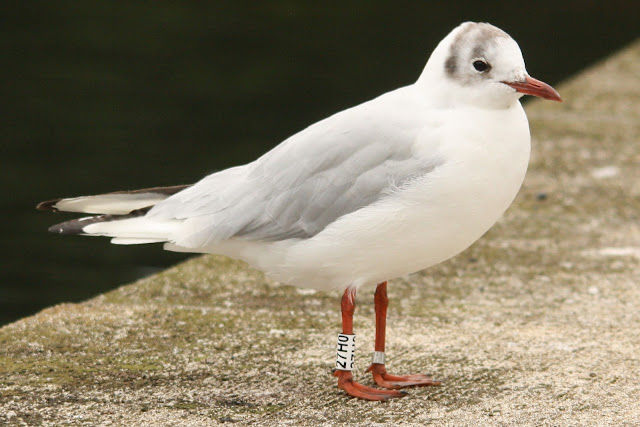 
Trip to Broadmeadows to count and read Swans.  Only counted 141 which is 8 less than last time.  However I did read 32 of our coloured rings.  I need to start ringing Swans again. 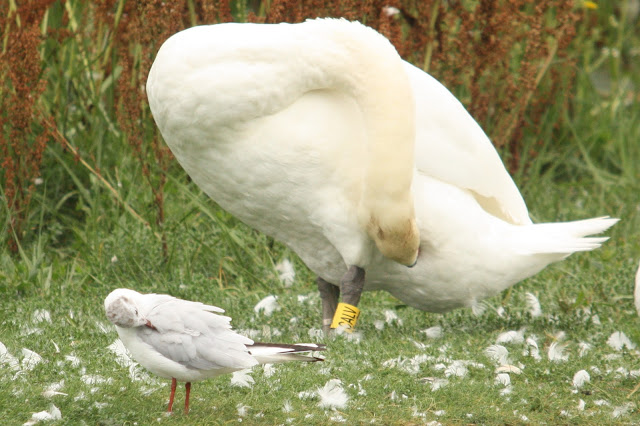 Posted by Graham Prole at 04:10 No comments: