In the parks of Tallaght, no new gull rings this week so far.  However, Black Headed Gull 27H0 is there most days. 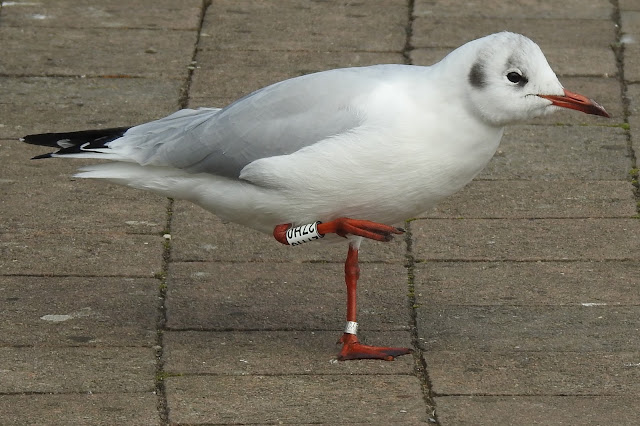 However, while checking on Cygnet numbers at Ballycragh Park, I spotted some Mediterranean Gulls.  When checking these out I spotted a Black Headed Gull with a white Ring.  It was E5VA.  This Dutch bird was a regular in Sean Walsh Park in 2012 and 2013.  Since then it has only been seen once or twice a year at that location.  I will have to keep a watch on Ballycragh Park to see if it a regular there. 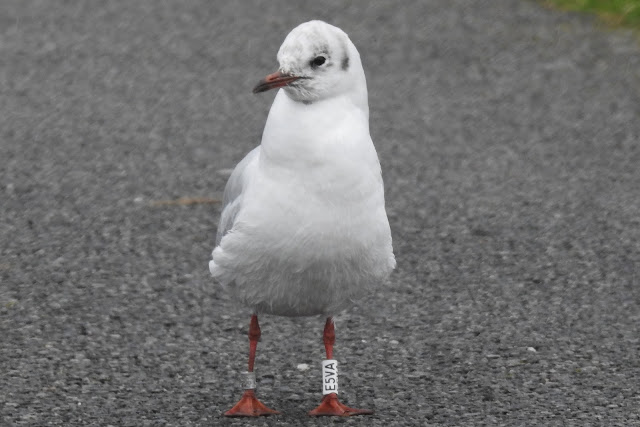 I took a walk on Booterstown Strand this evening and although I read some CR Med Gulls, two things were of particular interest.  There was a Golden Plover on the beach!  I have never seen one so far away from cover.  A Black Headed Gull was spotted.  Another Polish one ! 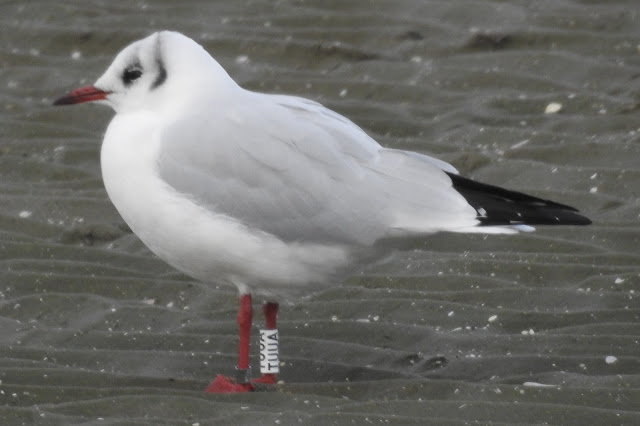 For 4 years I have been studying the Swans of Dublin and Wicklow.  I have been ringing and reading metal rings.  Then today, at Bray, a Swan, I have never seen before, swam in to the harbour with 6 grown cygnets.  The ring was probably put on in 2007, but I thought I knew all 60 nesting pairs! They continue to surprise me.


At Bullock Harbour this afternoon, there were large number of Large Gulls.  However, none of our red rings among the juveniles.  Apart from a Great Black-backed Gull 2LH and a med gull, there were no coloured rings to read.  Nice to see AKAJ back at Bullock for yet another season.

Due to a technical problem, I have received no emails to my Eircom address from 13th - 16th of September.  If you haven't received a reply within 48 hours, please resend!

Broadmeadows Estuary, quick stop.  Swan numbers appear well down this week.  The big movement has started. Certainly the 110 looks to have dropped to below 70.  Always difficult to count as some could be on the Islands or moved to the outer Estuary. 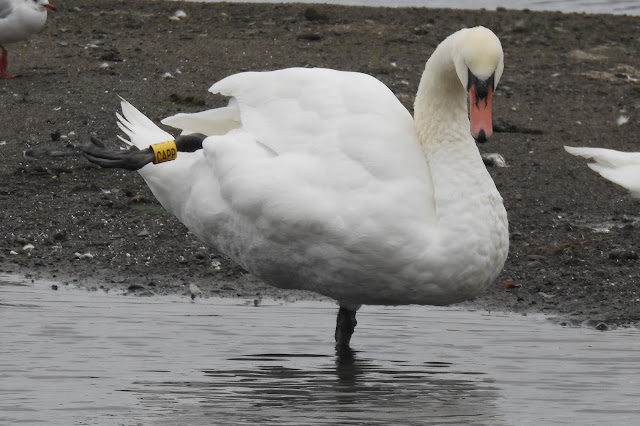 I did spot a CR Oystercatcher run across a sand bank.  Mad scramble to get camera out before it went back into the water.  Just as well, at 50 m I could see Orange over white.  The photo showed an inscription!
Bruce Lynch of the Tay Ringing Group quickly responded to me reporting it and confirmed it is Scottish. 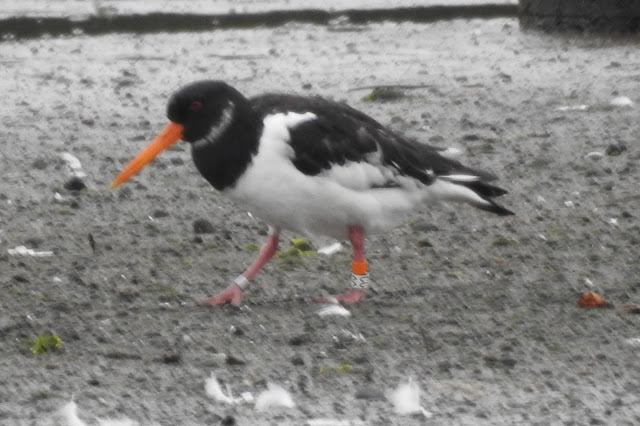 Sean Walsh Park and the first of the urban Gulls to appear! 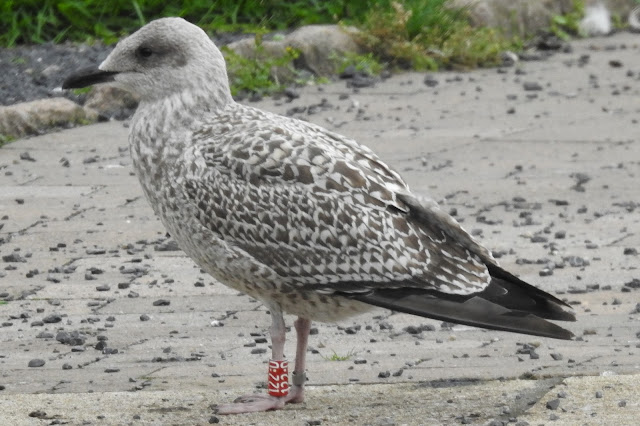 Instead of going to Booterstown Strand I went to Sandymount Strand 1km north (Nearer Dublin City Center).  Good numbers of Black Headed Gulls 1,000+.  Surely I must get a coloured ring among them? Eventually I spotted just one.  A yellow ring from Belguim.  Not having sighted this one before I assume it was only ringed this summer as an adult.  I await the report.

The Mute Swans are on the move, with 7 on the Grand Canal, 10 at Bull Island. Most of those read are from Broadmeadows, but the next 3 weeks will be busy completing the 2017 annual survival figures.  Today I read one new Colour Ringed Swan on the Canal.
My I-Webs count finishes at the Grand Canal Basin.  There was a Chinese Dragon Boat race about to start so less Gulls than usual.  But among the Herring Gull Juveniles was a Great Black Backed Juvenile with a Red Ring. 312:D.  However, it is not from Irelands Eye.  It was ringed as a Pullus on the roof of the Dáil!

Went out ring reading with a friend Sean this evening.  Stopping at Heuston Station, I quickly spotted a yellow ringed Black Headed Gull.  Great start, a new Polish gull.  The online reporting to Poland is quick and efficient.  I already know why I haven't seen this bird before.  It was only ringed as an adult this year.  Mine is the first sighting since ringing.

We were at Heuston Station looking at the mud banks on the Liffey to see if we could see and of our CR Urban Gulls.  Eventually I spotted a Herring Gull Juvenile with one of our rings.

We went out to Broadmeadows Estuary and read loads of Swan Rings.  Loads read, but no new to add into the annual survival statistics.  We did spot a Great Black Backed way out on a sand bank.  1NH, I haven't see it since 2014!

Sean also spotted one of our Irelands Eye Herring Gulls, again way out on a sand bank 174:D

We went on to Gormanstown Beach as Med Gulls are being reported from here.  No Med Gull rings recorded but scanning from the car park there were two Great Black Backed Gulls with Blue rings.  Too far away to read.  These were not located again but soon two other CR Birds showed themselves.  The first, among the 100 Black Legged Kittiwakes was the following juvenile.  Dreadful photobelow but the only one showing the lime ring.  Some projects are run by enthusiastic and efficient co-ordinators and this kittiwake project is one of those.   Jean-Yves Monnat has already confirmed it one of theirs from Finistere in Brittany. (The most western point of France),  and sent me the life history to date.

However, most of the time was trying to read a Lesser Black Backed Gull.  It kept moving behind other birds.  We were unsure of the code but in looking back on the photos I believe it is YE41 which makes it from Iceland!  A first for me both for CR LBBGU and 1st CR Gull from Iceland.

Received interesting and prompt reply from  Gudmundur A. Gudmundsson of the Icelandic Ringing Scheme, confirmed as an Icelandic Ringed Lesser Black Backed Gull.  However, since being ringed as a Chick it has never been recorded back in Iceland.  All sighting since it has been ringed were in Spain or Portugal and it hasn't been recorded for 5 years.  It is now 10 years old. Great result.


Unfortunately, there was a German Juvenile Black Headed Gull that as we were trying to confirm a sand buggy roared through the flock and put everything out to sea.  Each time they started to come ashore it roared through the flocks again and again so we had to call it a night.  Fantastic evening ring reading.
Posted by Graham Prole at 15:04 No comments: