Today in Sean Walsh Park, the Black Headed Gull 27H0 returned.  This is the first CR Black Headed Gull seen in the park this summer.  This is really exciting. It is the 3rd year in a row.  It shows how faithful is is to it's wintering ground.  It was seen at it's natal colony in England so it probably bred.  However it was not bird of the day - see below.


But, bird of the day goes to my first CR Med Gull recorded in Sean Walsh Park.  I occasionally see med gulls in the park, but this is the first with a coloured ring!  I did see it last week end down on the coast but Sean Walsh Park is 16km inland from there.

At last my first ringed Black Headed Gull of the summer.  While looking for Mediterranean Gull roosting at the Bull Island, I spotted a White ring some distance away on a BLHGU.  Despite the wind, rain and failing light, the photo was just legible.  My first German Project BLHGU. Some small doubt on the last number.  Many thanks to Sönke Martens for his quick reply. 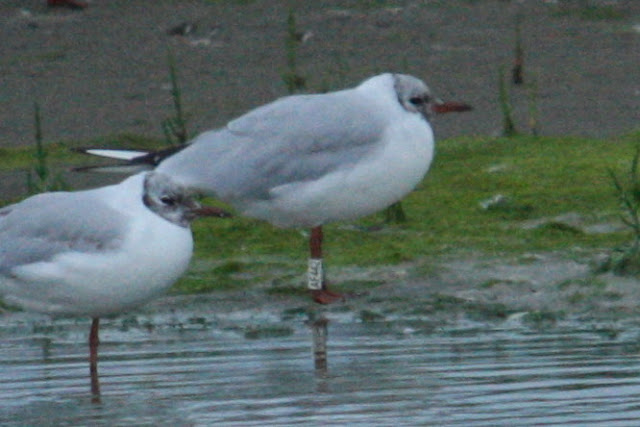 Great Black Backed Gull 1VU turned up in Sandyford Industrial Estate today!  I had spent a wet day catching up on Mute Swan pairs to ascertain Cygnet survival.  I had diverted to Sandyford Industrial Estate to count Mediterranean Gulls (11 recorded) and spotted the Great Black Backed, among the Herring and Lesser Black-backed perched on the buildings.

More CR Mediterranean Gulls!  The Black Headed Gulls are back in but no rings recorded all week.  So Sandycove again to read Med Gulls.  Got excited to see a ringed Juvenile, but it was only ringed on Wednesday!  Seven Coloured rings recorded out of 51 present and 3 were new to me but they may all have been ringed in the last week! 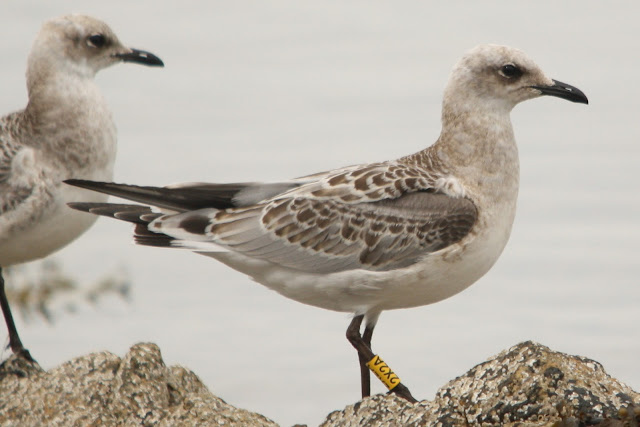 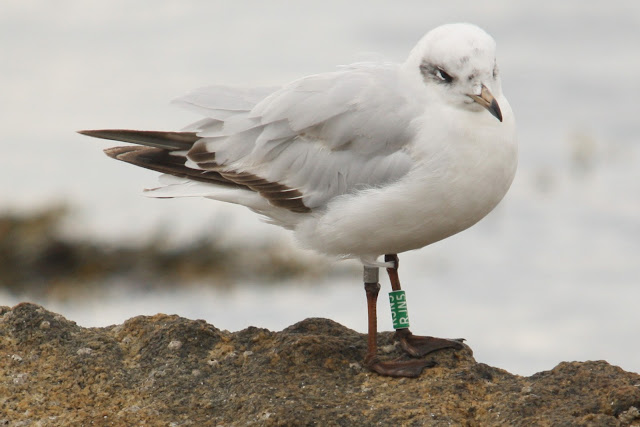 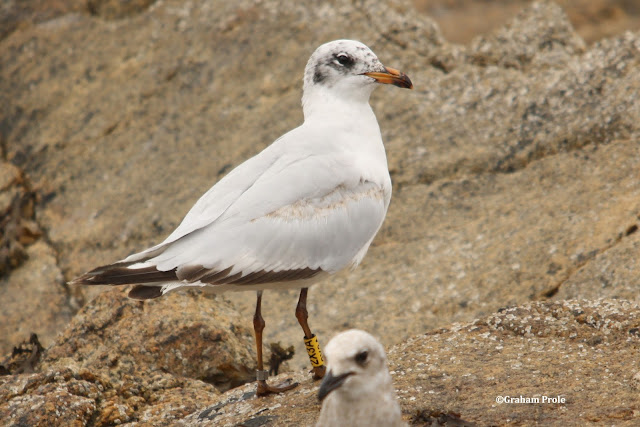 Sandycove again today and 5 coloured rings again!  653 is French and there is a new chip on the Darvic.  This is my first sighting of this Mediterranean Gull this season.


2X5A is a 1st year Mediterranean Gull.  It was ringed in Dublin Last year.  I am looking forward to finding out if it was seen on the continent over the breeding season
2X0J received it's yellow ring in Dublin, but it was ringed in the Netherlands as a Juvenile

But BIRD OF THE DAY goes to this Great Black backed Gull at Bullock Harbour.  I don't know whether it was lethargic or so sure of its self it couldn't be bothered moving, but I photographed it's metal ring from 3m away from both sides.  HT85358.  This is one of the old style rings with only an address - from the days before the www!!!


Back from a week in Kerry where I looked at a lot of Gulls and saw no rings.  However I contented myself by watching Chough and Raven and other birds which I don't see often.

Bullock harbour:  Great Black Backed Gull 1VV was there tonight.  I had noted that on July 4th that it was the first trip to Bullock that I hadn't seen it for nearly 2 years.  It is great to see an individual bird go through the various juvenile plumage changes and I have put earlier photos in to show the changes 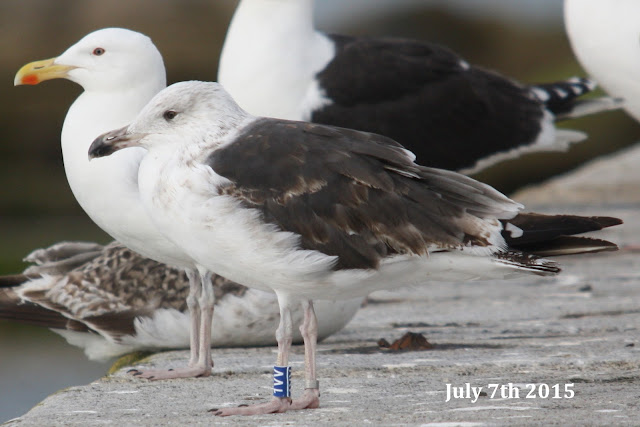 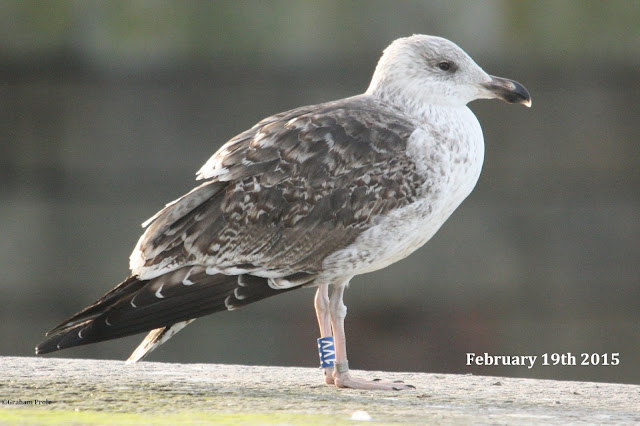 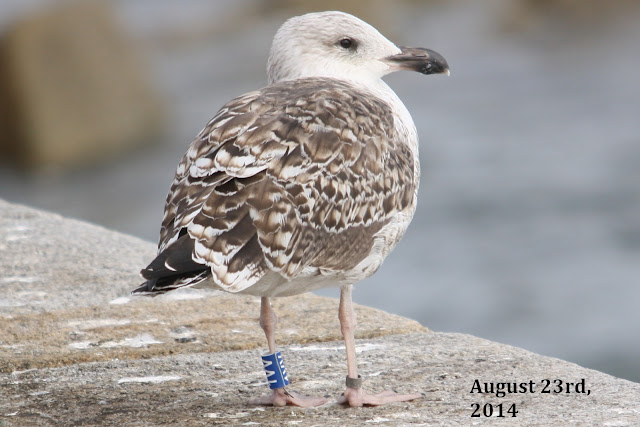 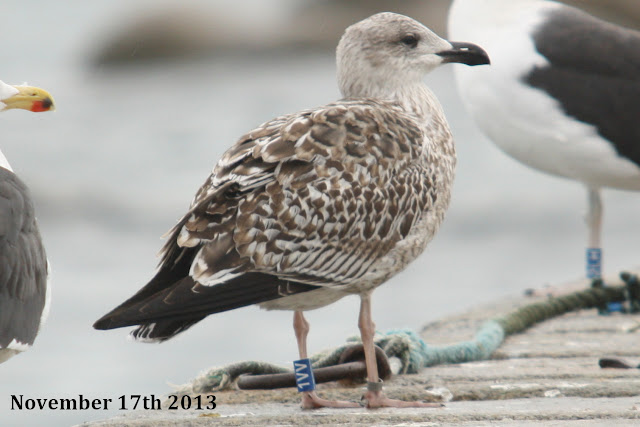 Lots of Mediterranean Gulls this morning and 6 coloured rings.  What a difference a day makes!

This adult from Belguim has been discussed in emails as the third letter on one side looks like an L and on the other side it looks like an E! 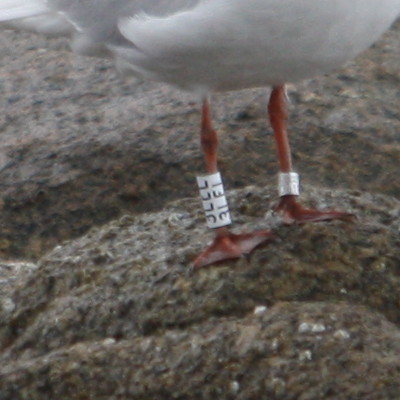 It's always interesting to see the same bird each year and receive the updated life history as where it has been seen since.  2X0J was ringed in Dublin as an adult in 2012.  Now the life history has sightings from its continental breeding colony as well as sightings on its migration.  It has arrived a couple of weeks earlier this year 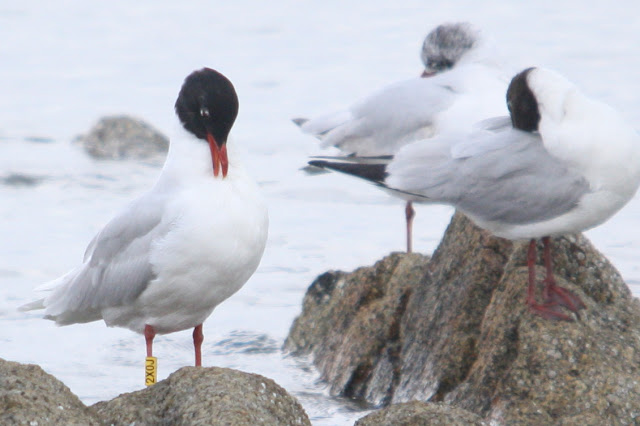 This French Mediterranean Gull is now a first year but it was around last year as a Juvenile. 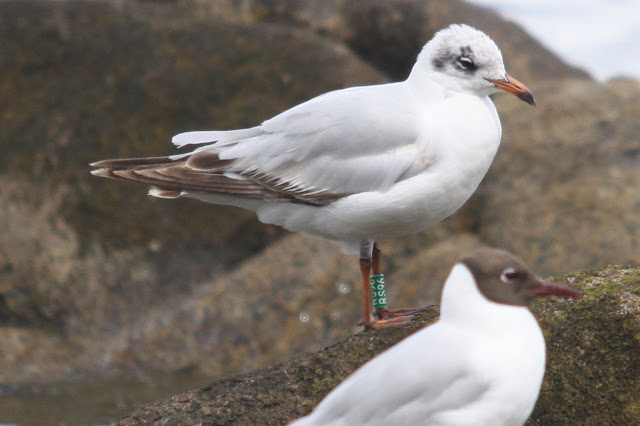 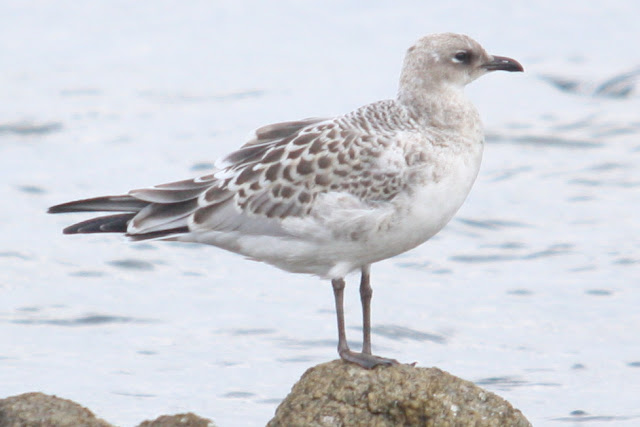 In the afternoon I went to Sandycove where the Mediterranean Gulls roost.  Usually there are a few coloured rings to read but of the 30 birds there was only 1 with a darvic.  Saw my first Mediterranean Juvenile of the year.


Howth Harbour: A wonderful trip this morning, my boys played football and I watched the gulls. There was a notable increase in Great Black Backed Gull adults.  I read 15 coloured rings all from Irelands Eye - an Island that is visible from the pier. 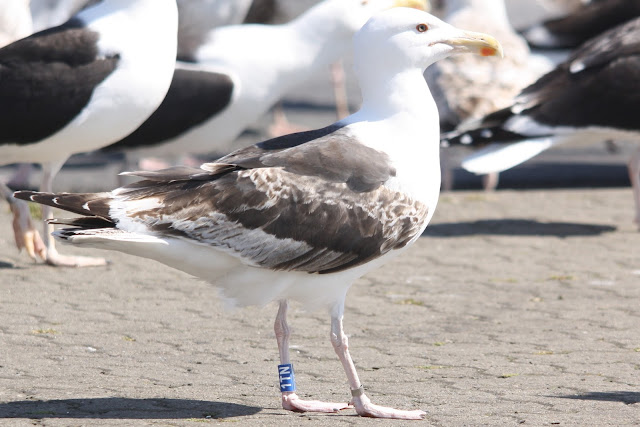 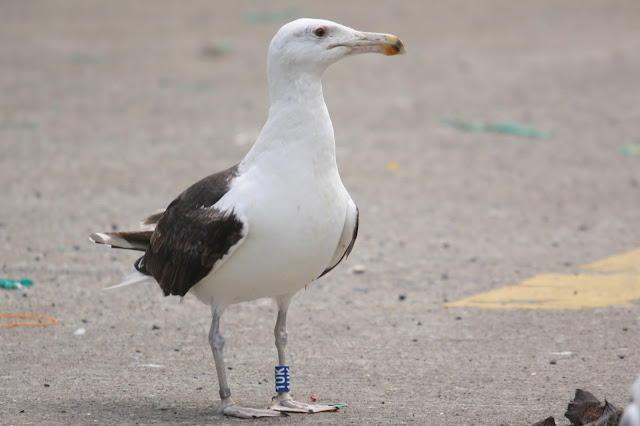 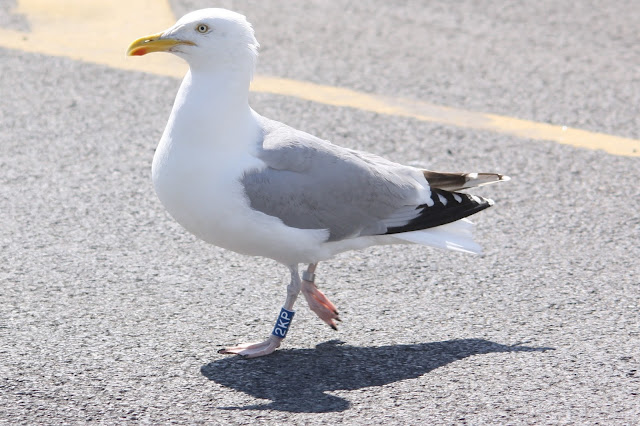 Bullock Harbour - I visited this site in the afternoon and surprised to see 1JR again, it was at Howth this morning.  There were only 2 Coloured rings recorded.  This is my first trip in a year that I didn't record 1VV at this location! 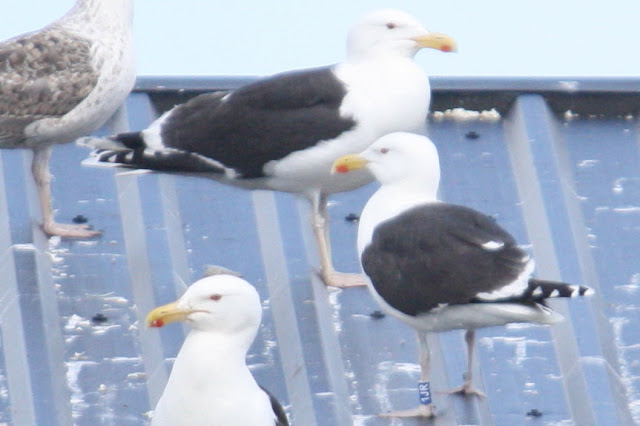 The first Black Headed Gull Juvenile arrived in Sean Walsh Park today.  There has been a steady increase of 1st year, 2nd year and adults arriving during the last week.  No rings to date. 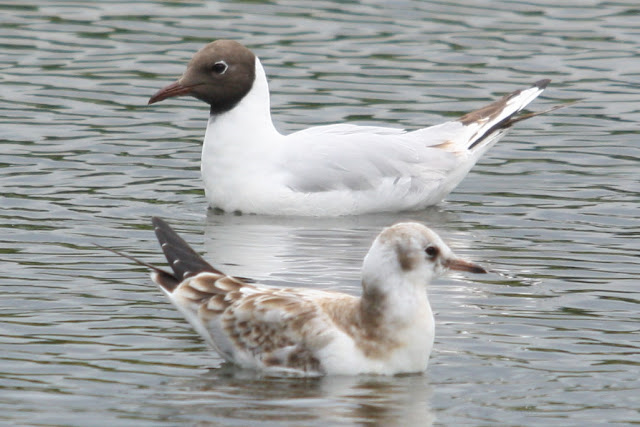 I have noted the two distinct colours of Lesser Black Backed Gulls and have started improving my id skills by trying to work our which is which.  One is also carrying a metal ring so my interest is heightened.  This one is the paler variety graellsii which also has a spot on p9. 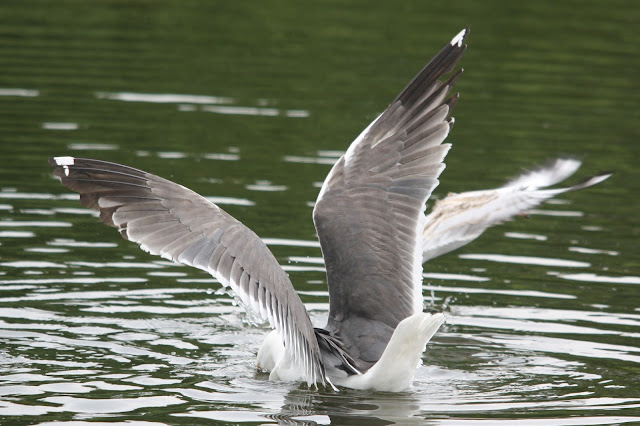