Today at Howth, we were reading coloured rings on Large Gulls.  What a successful day!  5 Herring Gull and 9 Great Black Backed Gulls with Blue "Irelands Eye" rings.   1ES was ringed in 2010 and this was my first sighting despite 5 years or regular visits.  2AV was only the  2nd sighting and the first since 2014!

In contrast I recorded 1UK, although the same age, there are 42 entries on the data base for that GBBGU which is more normal.

Today at Bullock Harbour there were no Mediterranean Gulls recorded.  I did however spot a Great Black Backed Gull way out on the rocks.  Ringed on Irelands Eye, an Island off the Dublin Coast in 2012, I had seen it 20 times previously but not since May 2016!  Glad to see it is still around. 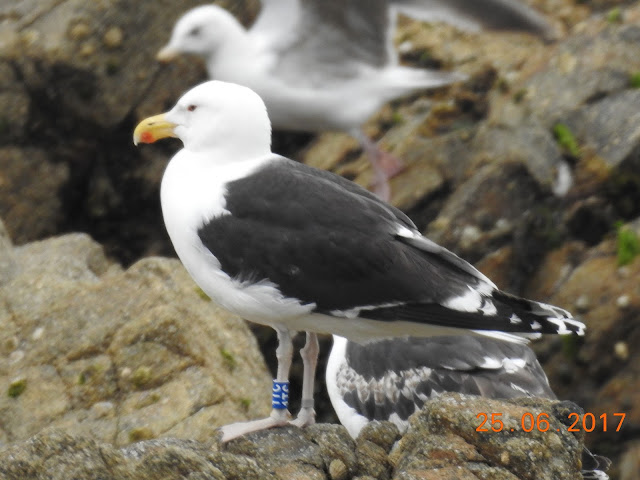 First Med Gull ring of the Season. White E147.  This Belguim Mediterranean Gull was ringed in 2011 as an Adult.  Seen annually in Sandycove and surrounding Parks.  I have recorded it many times.  Great to see it back for another Winter.  I think it is the first time it has been recorded in Bray Co Wicklow.