December 2013 - Another new Darvic and a Caspian Gull!

Ballymount Park, Dublin 24 at lunch time today and 18 Mute Swans were out of the water so I got to check for rings.  Only one with a ring and again a old style ring with a code that was unfamiliar to me.  Again, I hope it will be an interesting report when it arrives from the BTO.

Bray Harbour is not somewhere I look for coloured rings as it is well watched by others, but today I was reading Swan Rings.  There were also two Black Headed Gulls with Darvic rings. J0J2 from Norway and Black [P615] White.  It was my first time seeing P615 although it is on loads of different websites - but it is my first Black Headed Gull from Lithuania.  Ringed By Frank Majoor in 2008 as an Adult bird.


Eight of the Mute Swan Metal Rings read today were new to me, including the following ring.  Its number is not in a sequence I've seen before.  Hopefully it will be something exciting!

I moved down the coast to Bullock Harbour where there were no coloured rings at all, so moved on to the Forty Foot where the Mediterranean Gulls gather.  Four with coloured ring,  including this juvenile with a ring that I hadn't seen before.
I carried on to Blackrock Park where 20 Brent were grazing - no rings.  I did read the Mute swan.  I think that brings me up to 35 individuals or 16% of all Mute Swans ringed in Dublin and Wicklow!

While out on a St Stephens day walk in Corkagh Park, Dublin 22, with my son, I spotted a Mute Swan begging for bread off some children.  Photographed the ring - another to add to my growing data base!  My son was more excited by spotting a Barnacle Goose - Locally rare.

Happy Christmas to me!  An early present landed in Sean Walsh Park today.  It was a Juvenile Herring Gull 0MA.  It was ringed on 07/07/2013 by me!  I have only ever placed the ring on six birds and one travels 25km to my local Park which is 11Km inland.  It is also the first Herring Gull with a coloured ring I've seen in the Park.  I had seen it at Howth Harbour on November 21st 2013, if only it had a Santa hat on, the day would have been perfect!

Howth Harbour was today's destination with the aim of assisting in the banding of adult Great Black Backed Gulls.  No success.  However, I did some ring reading with remarkable results.  I have read almost 60 individuals from Ireland's Eye and today, 12 rings read and 3 were new to me.

Best of the day was a Juvenile Herring Gull 0LH.  This bird was ringed by me (under supervision) in July 2013 and today was my first re-sighting.


I also recorded an Adult 2LE which is a first sighting for me.  Ringed in 2009?  No decent photo. 1VS was also new to me

I spent some time trying to read a metal ring on a Larus Argentenus 'Omissus' type (Herring Gull with yellow legs) without success.  There were two present today, one sporting a ring.  The legs don't look as yellow in the photo! 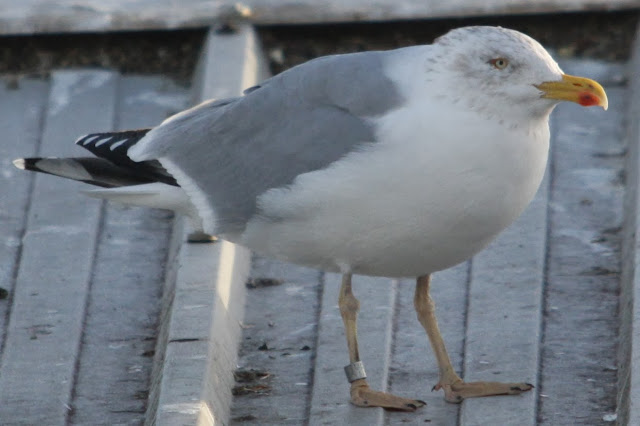 At the Med Fest in Dun Laoghaire on the 9th of November I read the ring of another Black Headed Gull from Finland.  Again a letter arrived in the post.  This Black Headed Gull was ringed as an adult in 2009 in TURKU, TURKU - PORI, FINLAND.  Again if your Finish Geography isn't great, that's 150km west of Helsinki! Again this was the first re-sighting!

It has been a normal week in Sean Walsh Park with the Black Headed Gulls E5VA, 27H0 and the new gull 4ET were all showing well.

I got a few ring reports back.  Finland replied by letter in the post!  I checked that I had included my email address, which I had.  The Black Headed Gull in Tymon Park was ringed as a Young bind in Lohja, Uusimaa, Finland in 2009.  Mine was the first re-sighting of this metal ringed bird.  For those whose Finish Geography isn't great, that's very close to Helsinki.

Malahide Estuary this afternoon was busy with kids feeding bread to Swans and Ducks.  No coloured rings seen so I read 10 Mute Swan metal rings.  Three of these rings were new to me.  I have shown photos of the other two types of swan Metal rings.  This is the third type.  Any ZZ rings I have read before have been 2007.
I went on to Howth Harbour where the weather turned wet and horrible.  Only two coloured rings read, both local from Irelands Eye.  Herring Gull 2KU is now in adult winter plumage with that dirty head look. 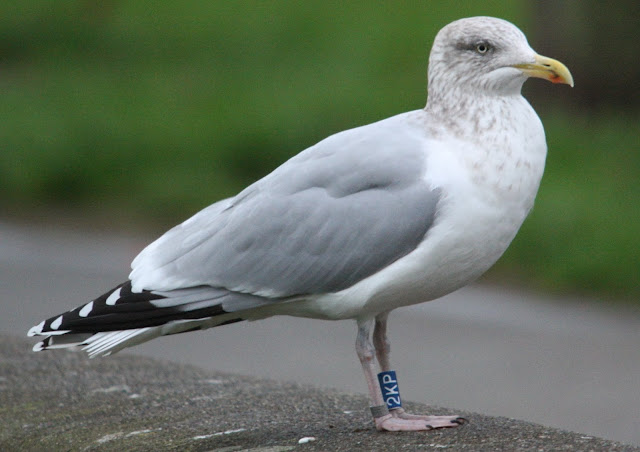 This week in Sean Walsh Park, Tallaght has had no surprises.  Black Headed Gulls 27H0, E5VA and the Swedish Metal Ring 6430814  have been ever present.
I also spend a lot of time looking at the different Gulls and their stages.  There can be a difference between different Juveniles of the same species.  This is what I believe is a 3cy Herring Gull.  But it's head is paler and eye darker than the other Herring Gulls at this stage.

Niall T Keogh has since pointed me in the right direction, it looked very like a Yellow-legged Gull (michahellis) - 2nd winter.  Further identification has lead to the consensus that it is a 2nd Winter Caspian Gull!!!!!!!!!!!!!!!!!!  If accepted by the IRBC, it would be the 13th Irish Record.

In the afternoon I stopped at Tymon Park, at the west end of the Park.  Over 1,000 Black Headed Gulls.  I hadn't seen a Darvic in this part for nearly 2 years, but spotted a white ring.  Difficult to read in the long grass.  Eventually, I read the ring and it was the Danish Gull 4ET.  I had seen it this week in Sean Walsh Park.  This is the first cross over between the two parks 1KM apart. 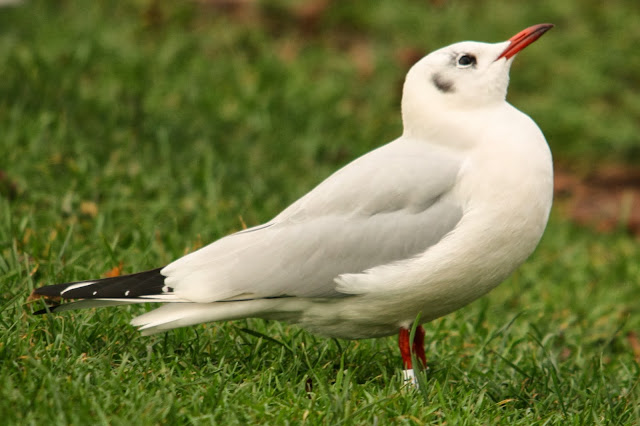 In the morning I went to Tymon Park, Spa Well playground with my 2 boys.  When we were leaving I spotted a metal ring.  I photographed it and to my surprise it was my first Black Headed Gull from Belguim.  Bruxelles clearly visible on the ring. POST SCRIPT.  Ringed in Antwerp in 2012. 25.02.2014. 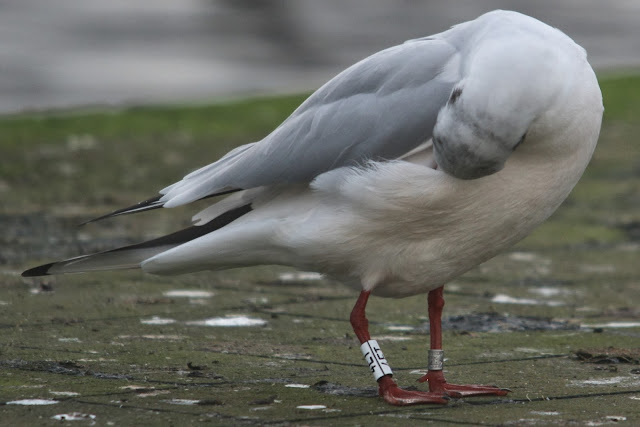 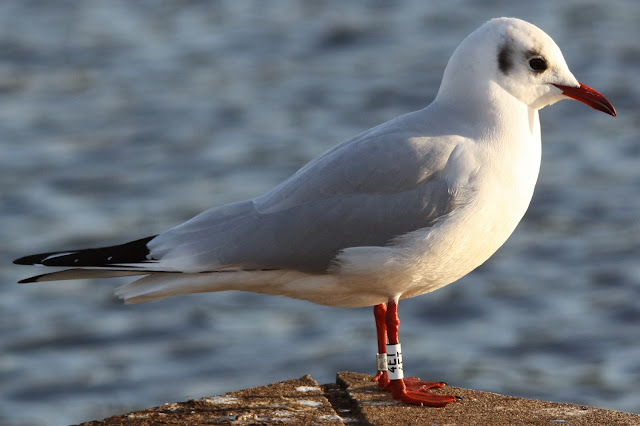 Sean Walsh Memorial Park in Tallaght, Dublin 24 again at lunch time today.  No big surprises.  The Dutch Black Headed Gull E5VA and the Black Headed Gull from Gloucestershire 27H0 were present.  No metal rings observed or recorded today.  There are now three Common Gull in the Park.  None with rings yet.

E5VA seemed to be darker on the head today than last month.  Odd.  Summer Plumage doesn't start to appear till Feb.  It may be the final moulting has given this appearance, or just a trick of the light