At Sandycove early this morning I saw two Mediterranean Gulls with Red Darvic Rings.  The 1st was H4L3, a frequently observed individual.  The other I assumed would be PRN6 a Polish Med, but it turned out to be HK36.  This is a first observation for me of this bird, (although it has been seen in Dublin over the previous 5 years at least).

In the evening  myself and Sean were both at Sandymount Strand.  The Black Headed Gull, 27H0 more frequently observed at Sean Walsh Park, had arrived in to roost.  We did spot a new Polish Black Headed Gull that new to both of us. Y[T71A].  Too far for my camera so it was read by scope. Nice to see three stages of hood on the three individuals! 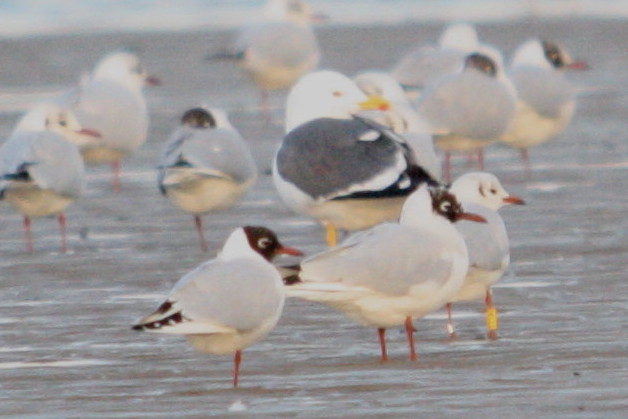 Breaking News on the Swan Front!

I received a report today from Bray Harbour, CAHS has turned up there!  So the news from last weekend that it had moved from Kildare to Dublin is old news, it is now in Wicklow!

In Sean Walsh Park today, the Black Headed Gull from Sweden 6430814 was present, however I was looking for another Gull with a metal which I saw last week.  I had photographed 4 digits and was fairly sure of the rest but today I got the whole code and it is one I last saw over 2 years ago in January 2014.  Ringed in Holland at the island De Kreupal when catching Black Terns in 2013 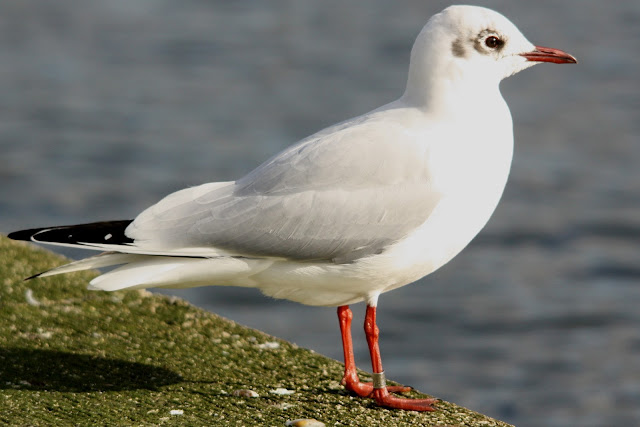 Today the Swan CAHS was photographed at Portobello during the I-Webs count of the Grand Canal.  Originally Colour Ringed in Naas, I photographed it yesterday in Sean Walsh Park 8km from todays' location.

In Sean Walsh Park there was a new Swan today. 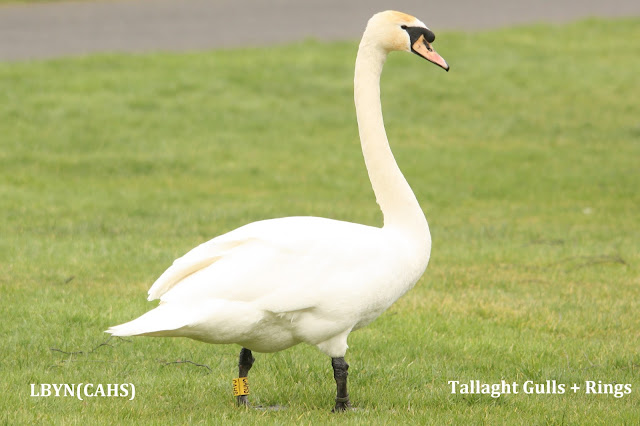 In the Mute Swan Project, one of the aspects that is of interest is the interaction between the Swans of Kildare and Dublin.  The new Swan in Sean Walsh Park was ringed at Naas Ponds as a 5 at the end of last year. (Hatched in 2014).  The distance between the two locations is 21km.

At Sean Walsh Park, the Black headed Gull 27H0 from Gloucestershire was present - only my 2nd sighting of the year, this is more than likely due to my lack of visits to this park. 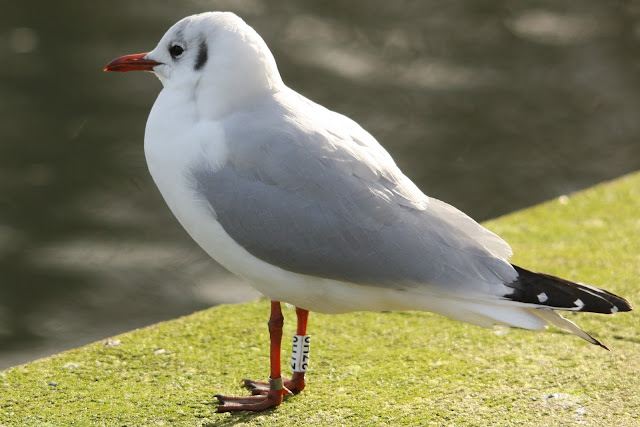 Sean Walsh Park was visited.  It has been devoid of colour rings for quite a while.  I was with my sons and I was getting them to throw bread so I could get a wing shot of the Caspian Gull when I spotted a yellow Darvic on a Juvenile Black Headed Gull.  It was KFL4 again.  So sighted in Jobstown, Sean Walsh Park at Tallaght Stadium, Bray Harbour and now Sean Walsh Park again.  Definitely my bird of the day!

To busy with the Swan Ringing project to use a camera!  Another 28 colour ringed and home for dinner

I went out to read the Swan Rings at Broadmeadows and 15 of the Swans that charged my car were coloured ringed.  However, bird of the Day goes to a Common Gull from Northern Ireland.  I had only seen it once before in September 2013 at the exact same location.  Reply from Shane is that no one had seen it since I last reported it! 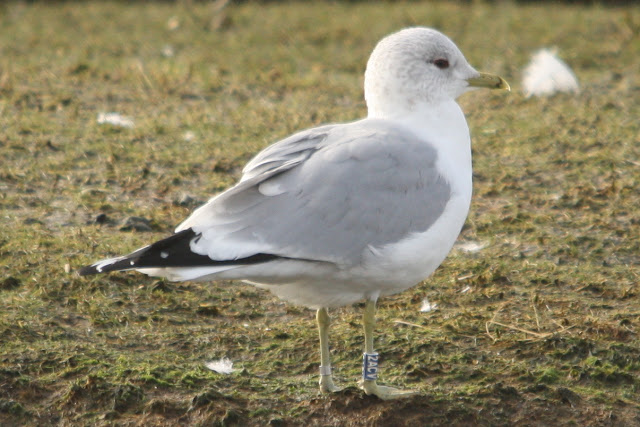 However, the real reason I was out today was I was looking for the Brent.  I found a whole family who had recently been ringed! 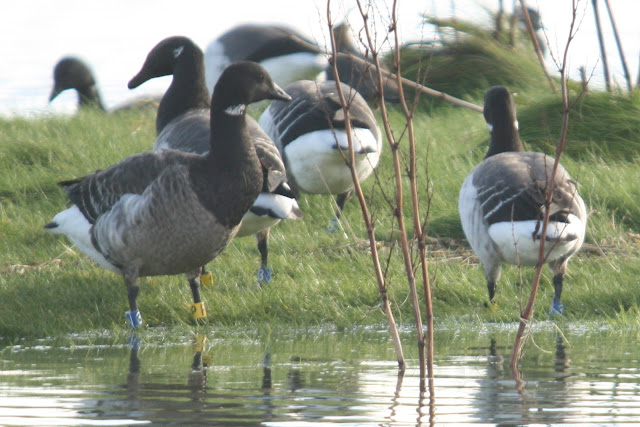 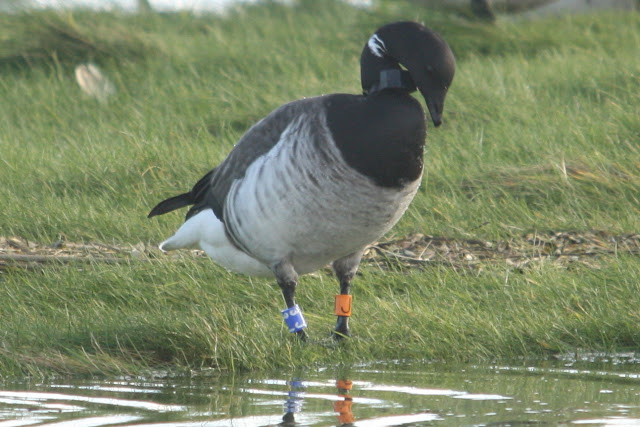 At Fr Collins Park I was checking up on the Swans on the way home and spotted the Norwegian Black Headed Gull again. 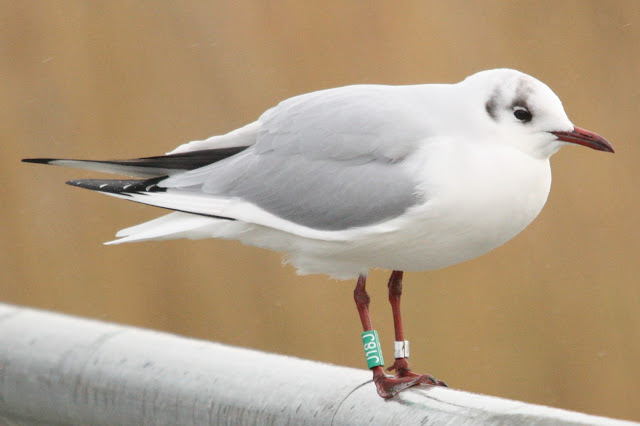 At Howth this morning I went for an early morning walk.  The numbers of Great Black Backed Gulls is up a little bit on last week, but as it was offal collection day unable to count them!

Has anyone seen a Coloured Ringed Greenshank in Kilcoole area this year?  I would be very interested to hear from anyone who has.  LB has an apparently incomplete code and would love to find some one who has read the full code.  mute.swan.ring"at"gmail.com

Today we had a Swan ringing session with the support of Dublin City Council.  An excellent and most enjoyable day.  Although the number ringed today (15) may have been less than other ringing days the 7 known breeding adults that were ringed, were the main target for the day.  Thank you to all the ringers, catchers and helpers.  A special thanks to Dublin City Council and to the Park Department for access.
Photos provided by Taylor Masalanka

At Malahide this morning there were a few Brent and one was ringed.  After seeing so many on long grass, at least I could read its rings as it was on mud. 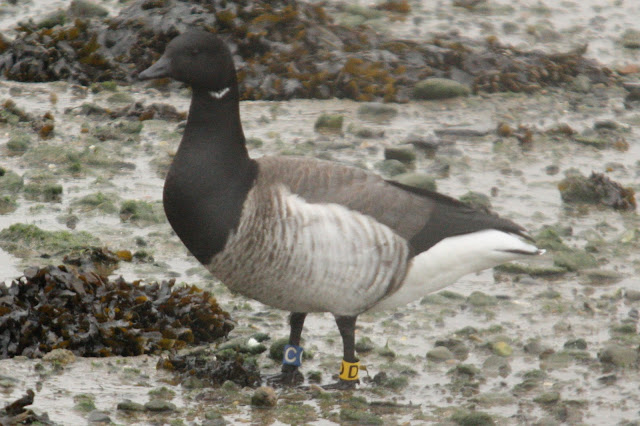 I don't normally post a picture of a bird with no ring but this huge Larus Argentatus was at Bray Harbour.  Although a Herring Gull it is a lot bigger than the type we normally get. 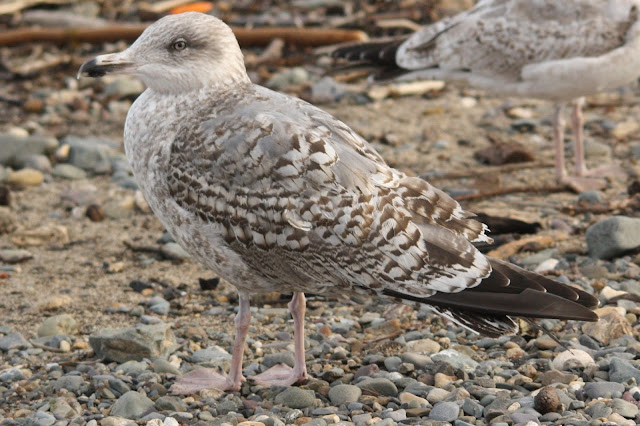 For World Wetland Day, I went to Howth Harbour to see the Offal Lorry collect from the Fish Factories.  This is an event I love -watching as thousands of Gulls try for easy pickings.  The numbers of Coloured Rings were less than I expected, but the weather has been un-seasonal.  Storm Henry only moved north this morning.  All coloured rings seen today are from Ireland's Eye, an Island you can see from Howth. 11 Coloured rings read and one metal. 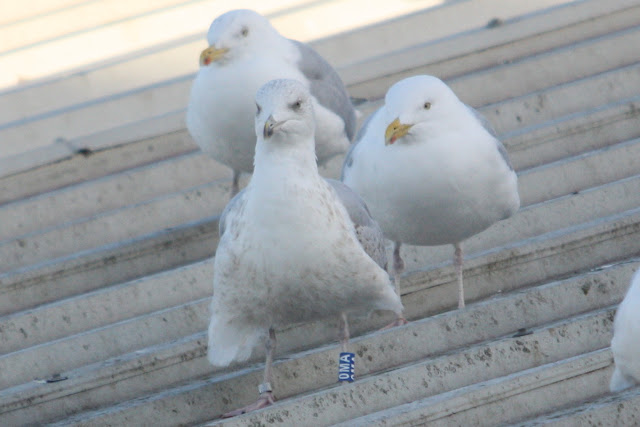 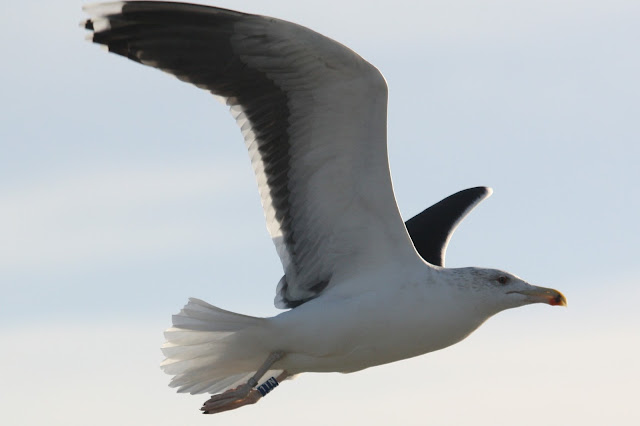 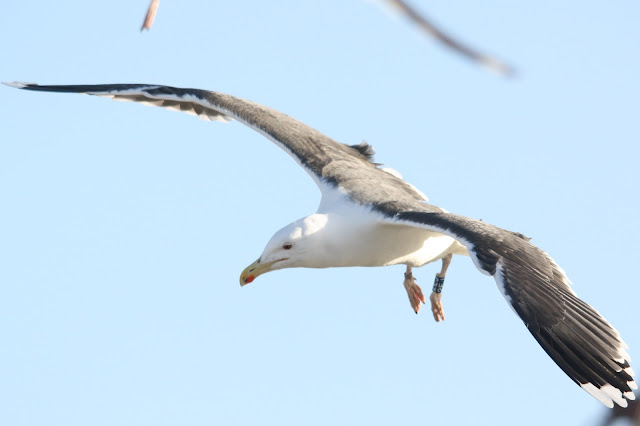 I am concerned at the crack in the coloured ring of 2EJ. 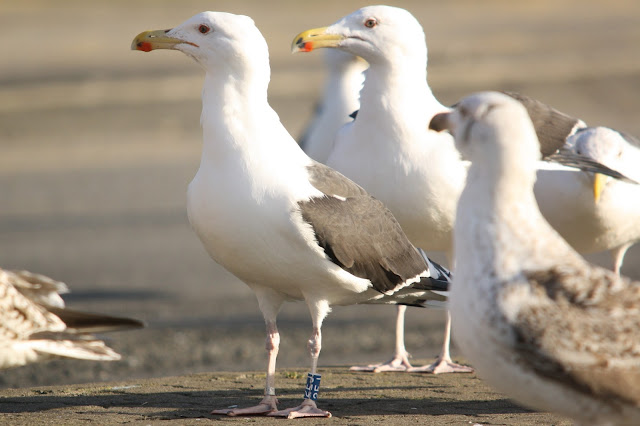 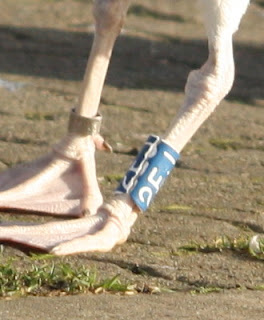 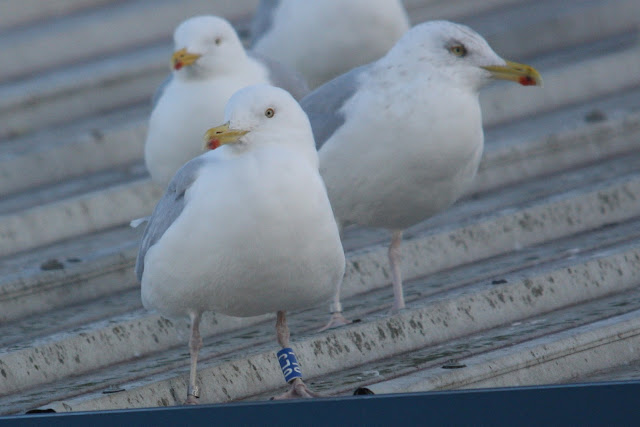 On the way home I spotted some Brent Geese, two were Colour Ringed so I read them quickly! 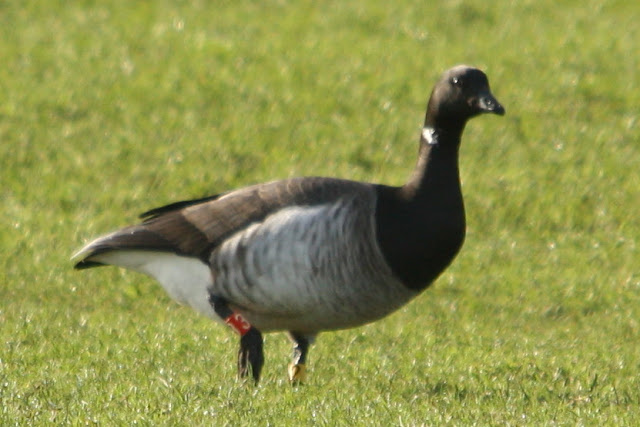 I went out to observe the ringing of Brent Geese.  Lovely to see them close up.  This photo take when they were all being released together. 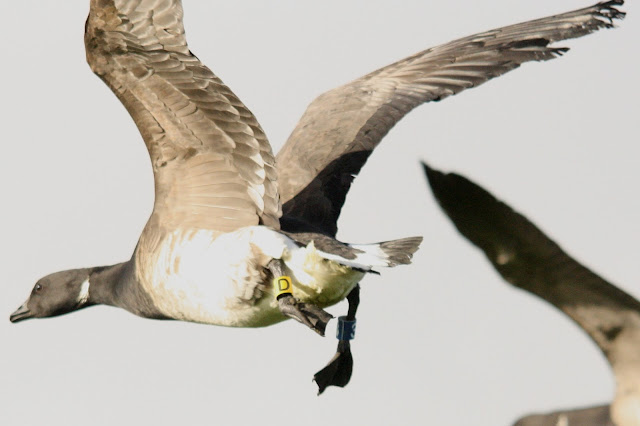