Still having Broadband issues so way behind on blog, apologies

Still a few Mediterranean Gulls about.  Recorded 2 at Sandycove.  PRN6 which is Polish.  Judging by previous departure dates, I expect it too will be gone by next week!

I was hoping to add readings of Greenland white fronted geese from the wexford wildlife reserve, but although I saw 1,000's of them, any with neck collars were 3 fields away and with the slight mist they were just out of range

There were about 100 in range but none with neck collars - maybe next year! 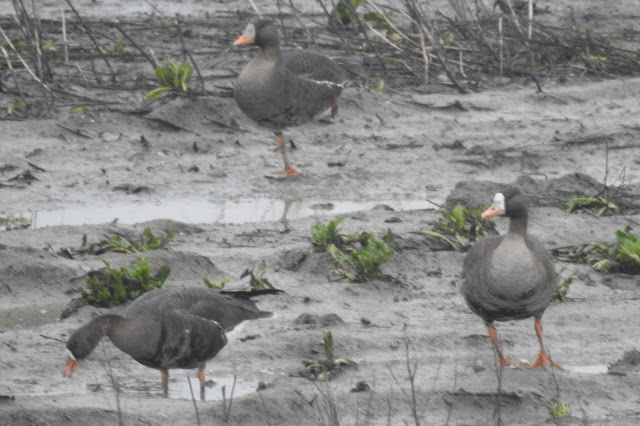 The same the next day, so I spent a few hours watching and reading Brent Geese.  The Snow Goose hanging around the centre had a Slimbridge metal! 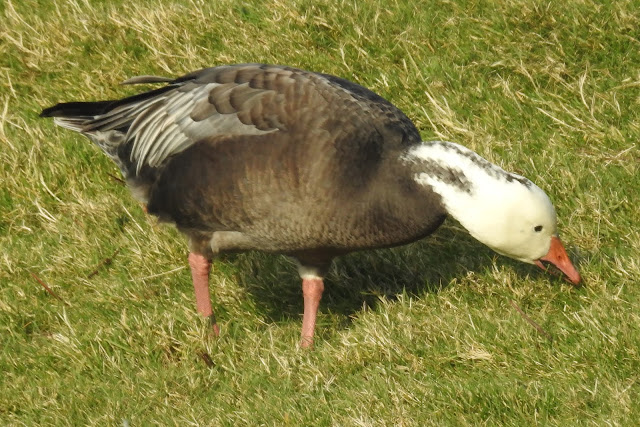 Got very close to lots of Greylag, but many are feral and only semi-wild.  No rings recorded 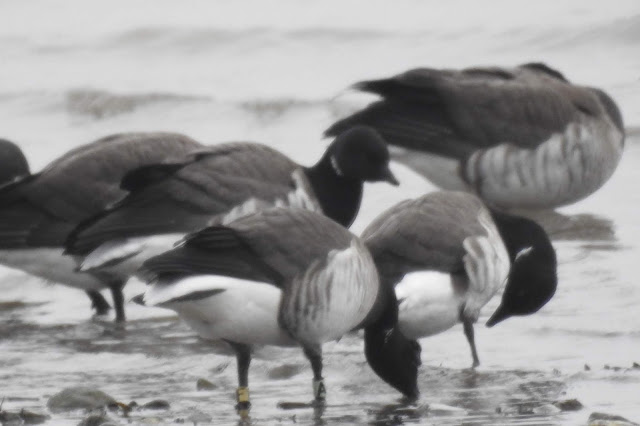 From my Hotel bedroom in Wexford, there is a manmade Island in view 200m away.  I was scanning the Gulls on this with my binoculars when I thought one might have a Red Ring! Not the best photo but 401:D.  It was in Howth 2 weeks ago 120Km north of here.  I had to go onto the Balcony to get this shot! 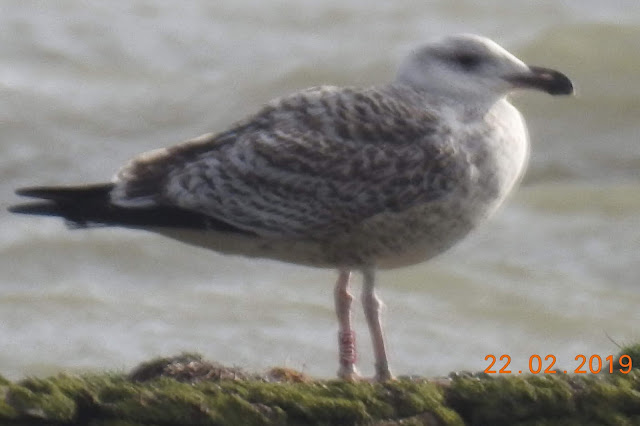 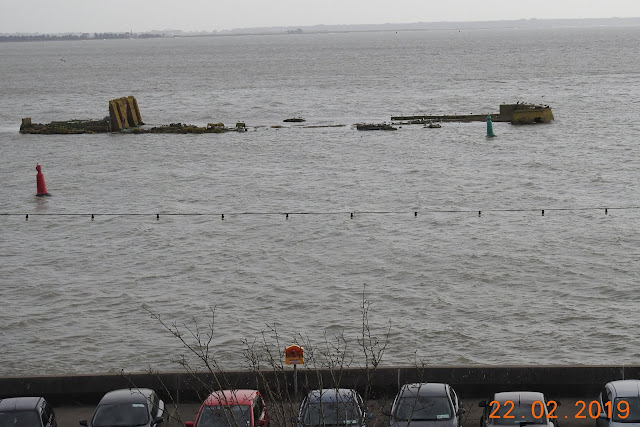 Now is the time of trying to get leaving dates for the Black-headed Gulls.  Numbers are dropping as adults are leaving.  2ACA has been present every day, but so far no sightings after the 16th.  has it left? 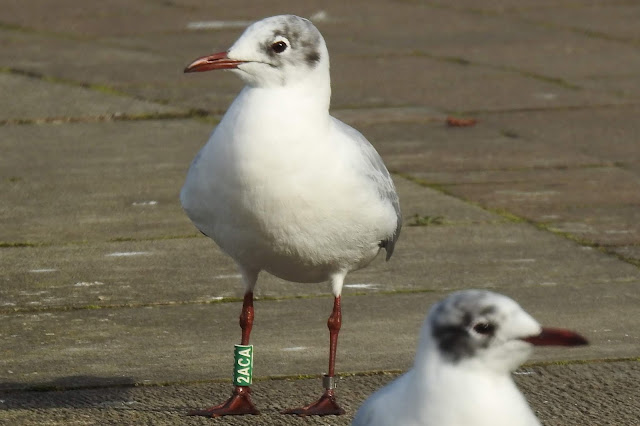 Passing Tallaght Community School, there was a Yellow ringed Black-headed Gull. This I assumed was the long awaited return of 217G, from Lough Mask.  First recored in TCS in 2012 and at the same location in  subsequent Winter, but usually only a couple of times until Sept 2015 and then nothing.  I stopped the car and out with the camera only to find it is a new ring!  Yellow [T7TT] is from Poland.  As I haven't  recorded it before, I assume it was ringed in 2018, but I will have the details in 2 days and update! 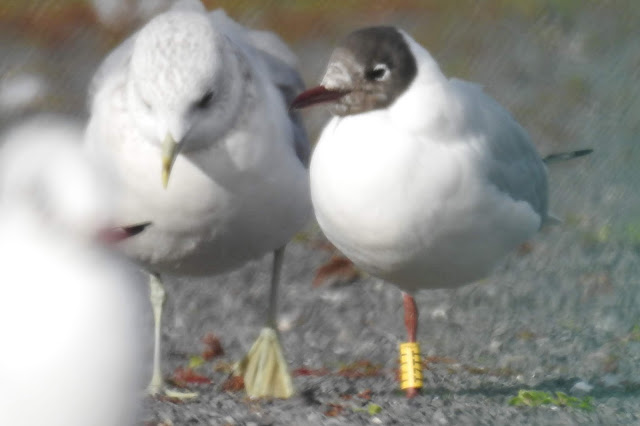 At my sons football match this morning I noted a Herring Gull on an Electricity Pole in Ballycragh Park.  One of our Club Project Gulls!  683:D is an Urban Gull and this was a first sighting since ringed!  Excellent! 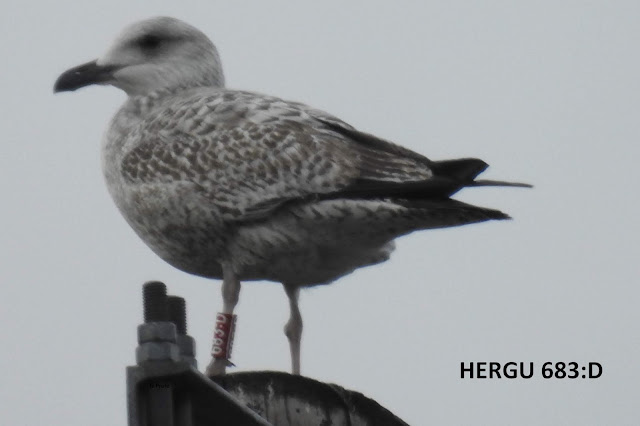 At lunch time today, as well as the usual coloured ringed Gulls, the Black-headed Gull 2A88.  Ringed in Essex, UK this is my 4th sighting this winter. 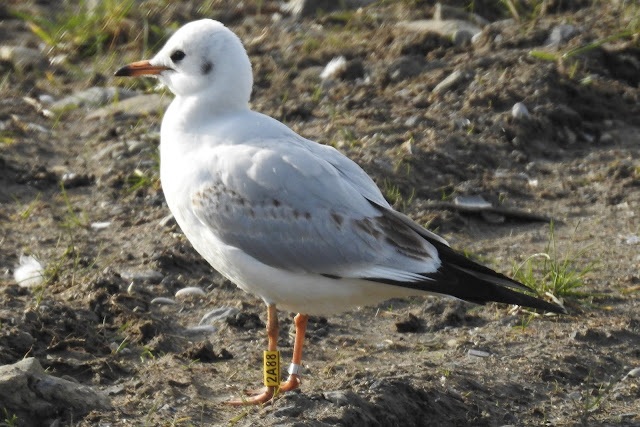 Today at Sean Walsh Park at the Stadium I observed Black-headed Gull White NUT from Denmark.  This Gull is getting on.  Ringed as an adult in 2005 it is in at least it's 17th calendar year!  I first observed it in this park in 2012 when I started ring reading. 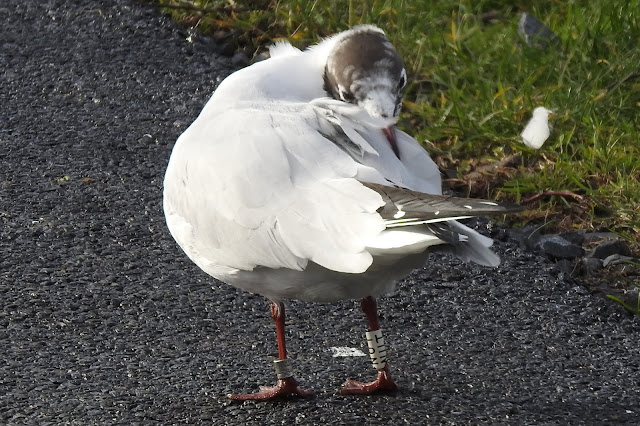 Only the usual suspects around at Sean Walsh Park, 27H0, 2ACA and the Swedish Juvenile who is always at my feet.  For me it has been a pleasure to watch its moult progression. 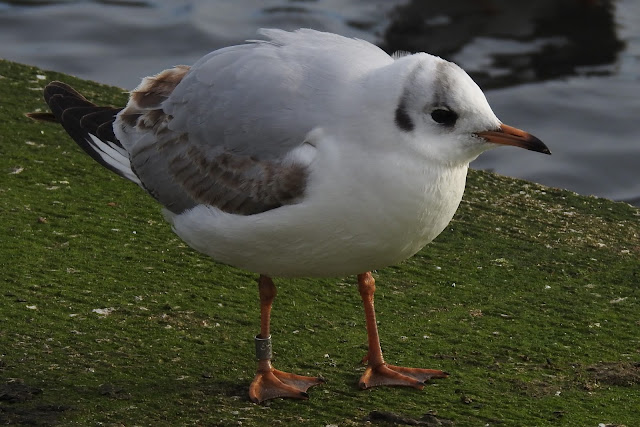 At Dublin Zoo again this morning with my boys.  The Zoo is actively discouraging the Herons which used to congregate around the food courts and Penguin enclosure.  I saw only 3 and only one with a coloured ring, K07 and it seems to have recently injured it's foot.

I read all the Ibis rings and some Flamingo rings....why, because they were there! 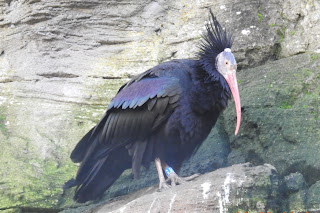 Howth on a Sunday would normally be quiet, but I forgot my Swan ringing kit, so after I collected Tonya we went there to try our luck.  Not much about till we were just about to head.  A Trawler removed it's nets for repair and suddenly we had Gulls!

Only a few coloured so we concentrated on metal only rings  This one was interesting.  When I input the metal as a Herring Gull it said ringed in 1996, but challenged me on species?  GA01076 is a Herrring Gull ring size, I await the report with intrigue!  The 2nd 0 looked like an 8 in one of the photos!

The other metal of interest was a Great Black-backed Gull with an Oscar Merne ring series.  Never took a photo of the whole bird before it flew off!

At Bray Harbour there was plenty of Gulls to scan but few with Coloured rings. The best was a Colour Ringed Mediterranean Gull.  White 3AAA is no stranger to Bray.  This individual from Denmark ringed in 2013 has been reported a dozen times at this location over the years.

The only Red ring was 791:D which seems to be a permanent fixture at this location.