Quick trip to Sandycove, but the spring tide was too high.  Just the occasional CR Med Gull, this one is Polish and a regular. 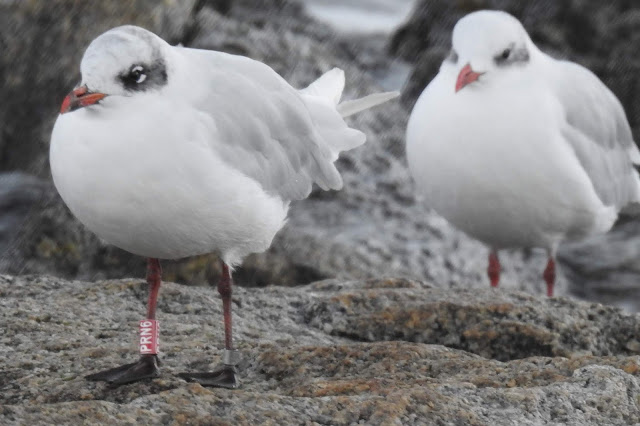 A brief stop at Sandycove only produced 1 CR Tern sighting.  They all count!

A short trip to Bray turned out to be quite sociable as well as productive!  Met Marcia and Bob who were observing a Swan to see if it required the assistance of a vet.  When I got home I forwarded photos from the past year to showing the wing droop.

However, there were Gulls and I was lucky enough to read 4 of our Red rings.


Just to put the geography of the project into prospective for those who are not familiar with Dublin.
St Patricks Island is the most northerly of the Dublin Islands which we ring project gulls on and Dalkey is the most Southerly.  Bray Harbour is 7Km south of Dalkey Island. 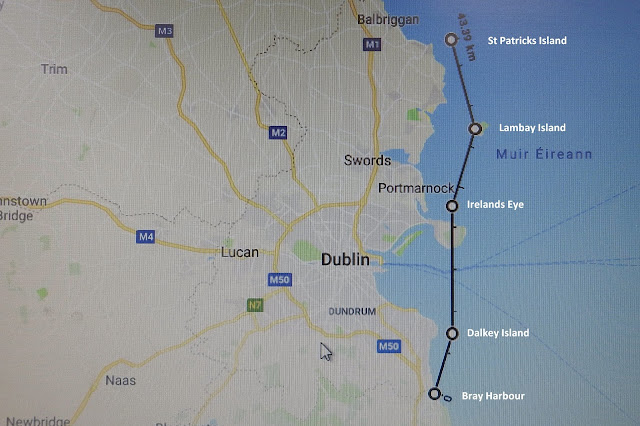 Dun Laoghaire was closed for an Iron Man Event in the morning but by 4pm the roads were still not open!  I ended up on Booterstown Strand and the timing was good regarding the incoming tide.  Hardly any terns, so Coloured Ringed Black-headed Gulls was my target species.  However, it is difficult to walk past a few hundred Oystercatchers with out recording a few!


In the end I recorded 10 Oystercatchers, 2 Meds and 2 Black-headed Gulls.  Lovely evening!

At the Forty Foot in Dun Laoghaire no CR Terns recorded.  I was just leaving when I got cajoled into going into the Martello Tower Museum and up to the roof to take in the view.  Unlike many tourist attraction, it is free!  I availed of the offer. When I was leaving I noted a couple more Terns have arrived on the rocks and I quickly recorded my first with an Orange Flag!  I have emailed Stephen Dodd in Wales and await his reply


I moved onto Sea Point.  Tara Adcock had asked in an email if I had read any Common Terns this year.  I hadn't and the tide was high enough to try.  As the species of bird gets smaller so does the ring size and you need to get reasonably near to read them.  At High Tide at Sea Point there are usually a couple of dozen roosting on the rocks 20m from the road!

A quick trip to the coast and started at the Forty Foot area of Dun Laoghaire.  It was High Tide so went looking at where birds roost.  As expected there were a few Mediterranean Gulls and Terns roosting.  The photos are poor and heavily cropped but the all important codes are visible!

The first recorded is Orange [KSS]  this is another of this years Juveniles from Lady's Island in Wexford.  Isn't it fascinating that they head north before they head south for winter. 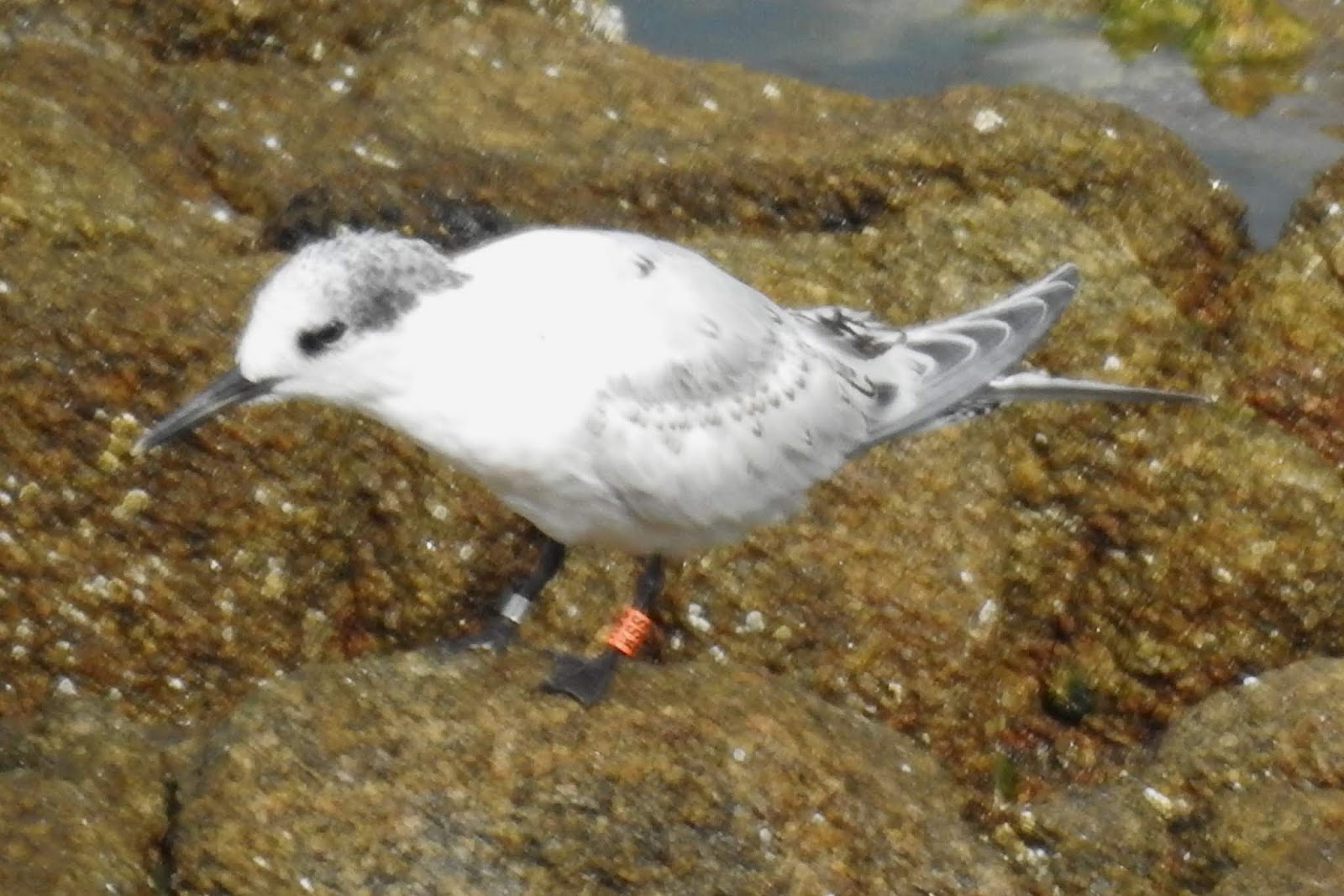 The 2nd was Red [KFT] from a Welsh Project.  I haven't got the history of this one yet. 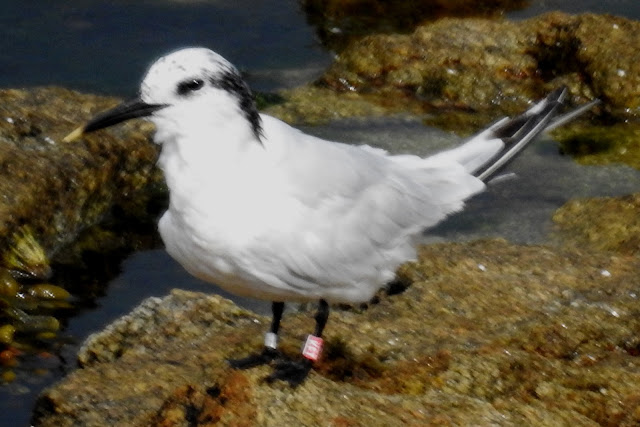 I moved on to a place called Sea Point, usually the alternative high tide roost for Med Gulls.  I recorded 2 coloured rings of the 34 present.  The first was Yellow [2XK0].  Ringed in 2015, but I don't appear to have seen it for a couple of years.  I do know it was sighted in Portugal in 2017.

Med Gull White[3416] is an adult that is new to me.  The code is quite recent so it could have been coming to Dublin for years before it was colour ringed. 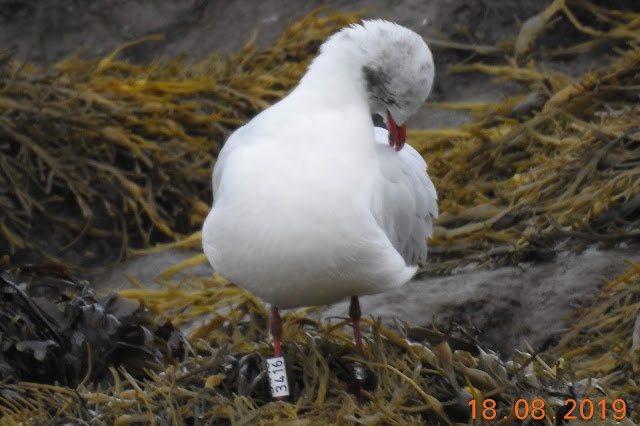 Then scanning the Terns out on the far rocks I noticed more coloured rings!  Again the photos are heavily cropped but the codes and colours were obtainable.

Bird of the day was at Sandycove was a Herring Gull among the Mediterranean Gulls.  Ringed at an Urban nest at a Bus Garage in Dublin.  First sighting since fledged.


This afternoon at Sandycove 53 Mediterranean Glls but only 4 Coloured Rings.  Green [RS96], Red [PRN6] Yellow 2X6J and my Med of the day was new to me White [3KR5]

Bullock Harbour and the day just got even better!  There were 4 newly fledged Great Black-backed Gulls from Dalkey Island.  505:D, 506:D, 518:D and 543:D.  Hopefully more will show in the coming weeks!

Following sightings from David I went to Sean Walsh Park and sure enough 2ACA and 27H0 are back. 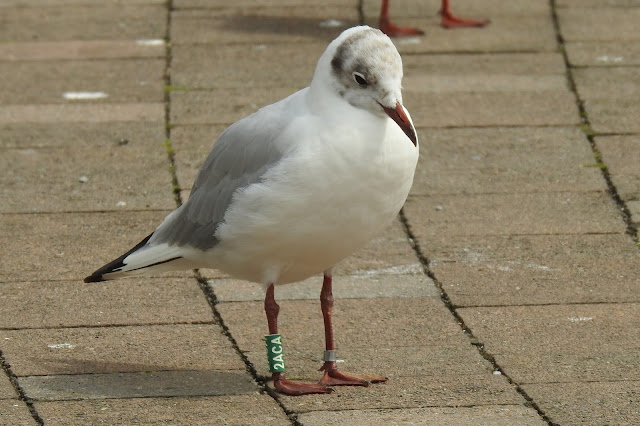 At Sandycove, Med Gull White 3761 was another new one!  I recorded the French one Green RS96 I am very familiar with.  The interesting sighting was AYKL, as with my Nikon P900, it is very rare that I record anything in flight!  It is German.  Many ringing groups are still submitting and collating data so I will update when the sighting reports come in. 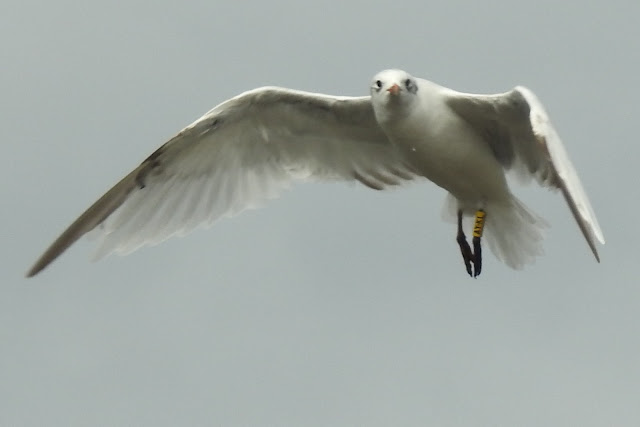 At Bray Harbour, no Red rings recorded, but Black-headed Gull 9MT from Denmark, ringed as an adult last year, is back.  I was delighted to record 2 metal ringed Swans for the first time this year
This brings my total number of individual Swans recorded this season to 180.  This is really poor, but the data is the data.  1,500+ sightings and very few new individuals are being noted. 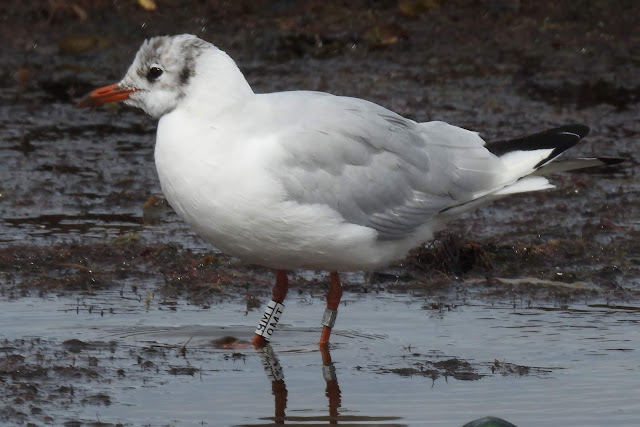 At Howth this morning there were only a few colour ringed gulls.  This is the frustrating bit.  We have colour ringed over 1,000 with red rings over the past 3 years.  I still find it very hard to locate any!  Eventually I spotted 448:D on a roof!  I do get in sightings from others, but I am still surprised how few are in Dublin still! 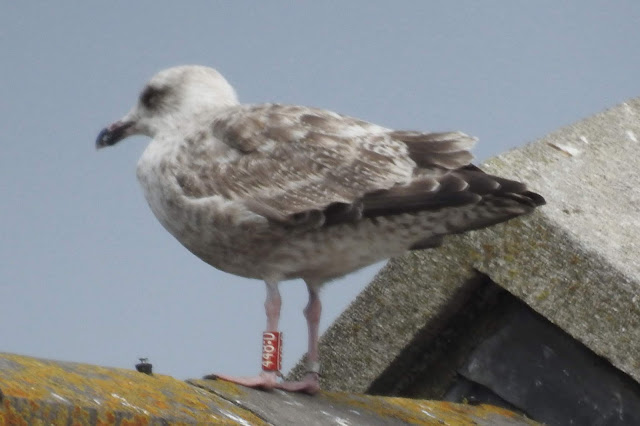 There were a few adults with the old Blue rings.  1MC has been a regular at the Harbour for the past month.  Judging by previous years it will soon depart to Broadmeadows and North Dublin which it appears to favour for winter. 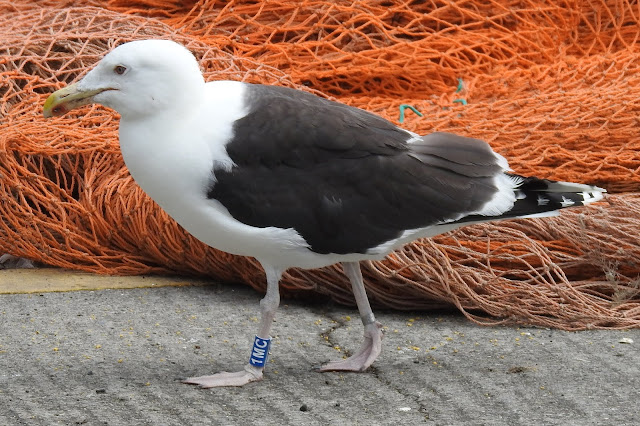 I left Howth to go meet a friend for lunch and stopped at Bull Island.  No rings on any gulls recorded. and there were a lot of Gulls.  But I did spot an Oystercatcher from the Dublin Bay Project.  Very far away but the code captured on this record shot. 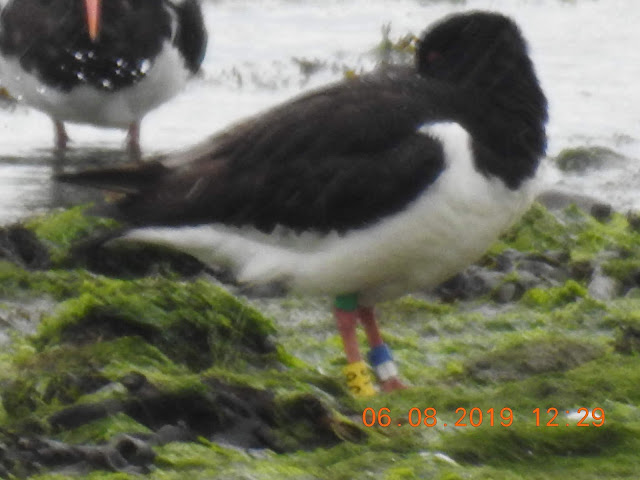 The Blue above the metal signifies that it was ringed on the North Side of Dublin.


An evening Walk at Sandycove produced 3 CR Mediterranean Gulls.  White 3HN3 is another new one, probably ringed as an adult.  No reply yet from the ringers. 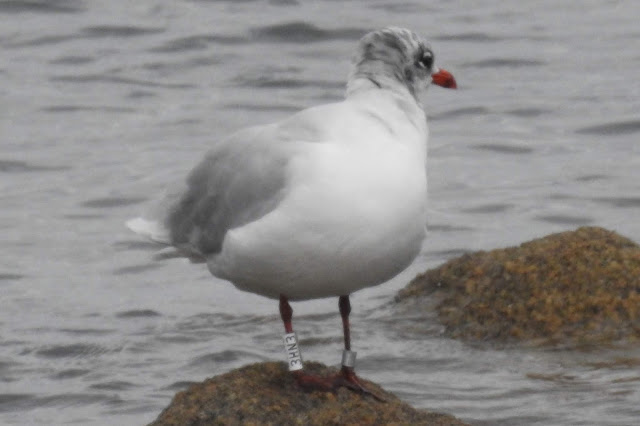 Mediterranean Gull 2X0E I am familiar with.  Ringed in Dublin.  Colour ringed in 2012 as an adult in Dublin, it is an annual visitor. 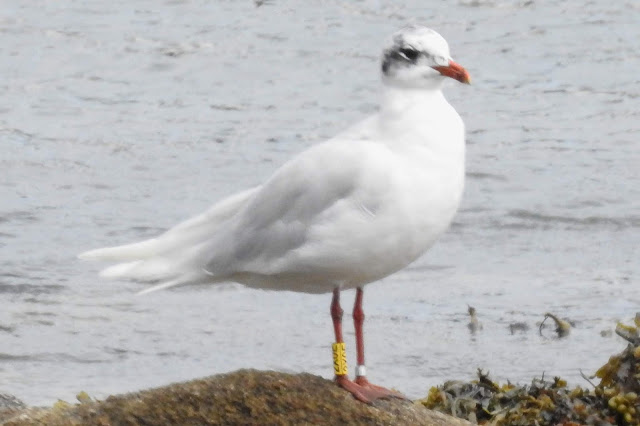 Mediterranean Gull, White 3785 is the first colour ringed Juvenile I have recorded this year.  Hopefully it will continue to return for many years to come. 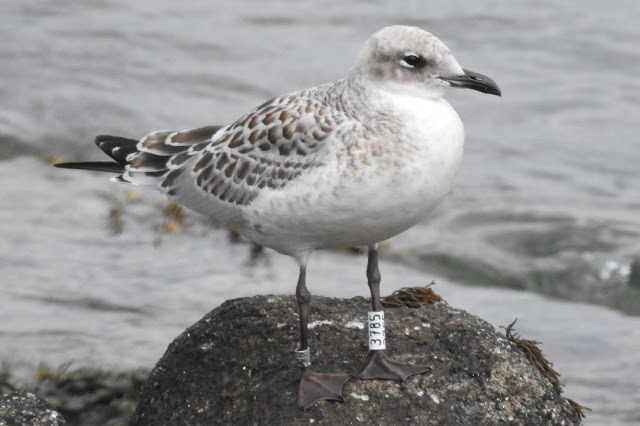 
A trip to Dublin Zoo.  I was checking out how the measures to discourage Herons begging at the Restaurants is continuing.  Pretty good with only 2 individuals observed.  This would have been around 20 Herons 5 years ago.  Only one Ringed individual observed K07 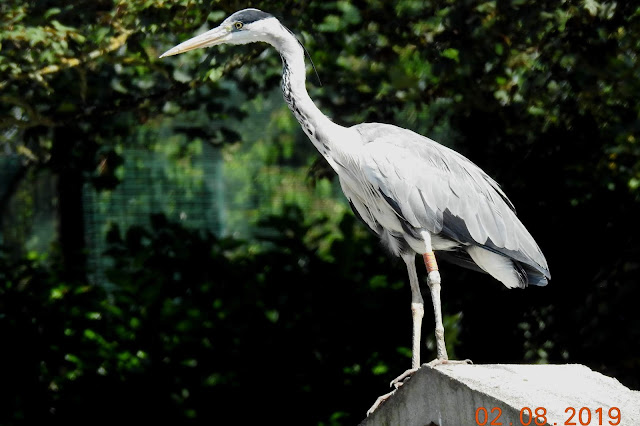 Posted by Graham Prole at 14:58 No comments: