This morning in Tymon Park my boys were heading to the forest playground when I spotted a metal on a Black Headed Gull.  40 photos later!  Upside down ring read!  EH11506 was ringed in 2004 in Derbyshire.  I hadn't seen it since 2013!!!!

Last night I went for an evening walk in Wexford Town.  I spotted 20 gulls on a roof and one carried a Green Norwegian Ring!  Ringed in 2014, mine was the first sighting outside Norway. 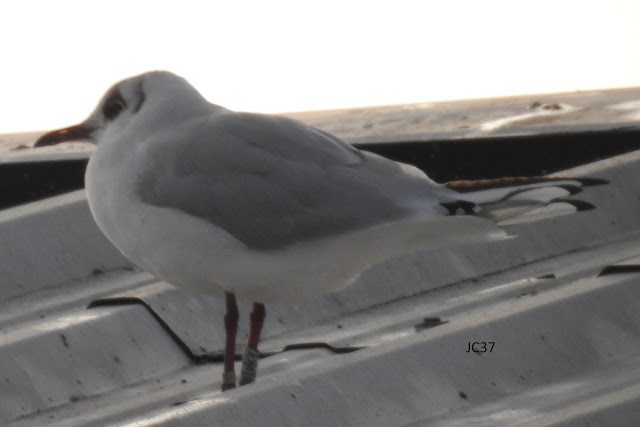 I was away for a week on a family holiday, but couldn't drive past Duncannon Beach without a quick look!  Only 100 Gulls on the beach.  Quick scan and 2 Mediterranean Gulls and 1 with a CR Ring. This is a 2nd year French Gull and was seen last year on the same beach. 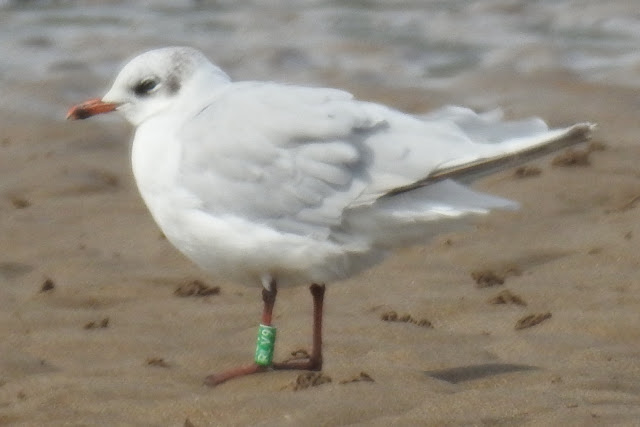 The month has been spent looking at Juvenile Gulls from the mixed colonies and for my own education brushing up on Juvenile ID skills!  It is one thing to say Juvenile Lesser Black Backed Gull or Juvenile Herring Gull, but explaining why requires reading up.

This Juvenile was darker than the other Herring Gull Juveniles and I would have just said Lesser Black Backed Gull, but some Herring Gulls are considerably darker than others.  Most of the books use Dutch and Scandanavian birds as examples and they are very slightly different
Firstly, the Tertial feathers are interesting.  They have a dark center, "with tips edged with white that don't go as far as the greater coverts".  A classic feature of Lesser Black Backed  Gull.  The bill is also classic "dark to the base" although not a defining feature in August.  (By October the Herring Gulls will have developed a lighter base to the bill).  Add the overall appearance of Scales and I reported it as a Lesser Black Backed Gull.  It refuses to fly from where it stood so I never got a wings open shot!  Email me if I got this one wrong!!!

I went to Broadmeadows, to read some swan rings.  However, I spotted a Black Headed Gull with a white Darvic.  It is from Holland and I have not seen it before. The Dutch are now requesting that sightings are submitted on line.  This I have done and I am now waiting for the sighting to be authenticated.

20/08/2017 Received a nice reply and life history from Date Lutterop in the Netherlands.  EH1Z was ringed last year as a 1CY, so surprised it either wasn't reported last year or wasn't here last year. 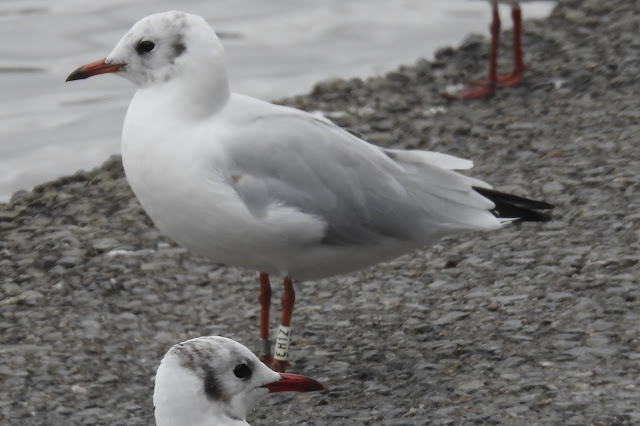 Of the 30 Swans read at Broadmeadows, there were none I haven't seen this season.  However, while looking for missing individuals today, I recorded  CAJJ in Coolock, where it was ringed.  It hasn't been seen in over a year and I thought that as it has a deformed bill that it may have perished.  However, it seems to be doing fine.

Either of these two could have been my bird of the day, however I stopped at the base of the East wall.  Laods of Terns and Gulls sit out on the railings.  Scanning these more than half were metal ringed.  One metal seemed taller so out with the camera and it was actually a Darvic Ring.  Glad I was able to read it as it was 25m away!

The juvenile large gulls are now appearing every where I look!  This morning at Grand Canal Basin there were two - both Herring Gulls. 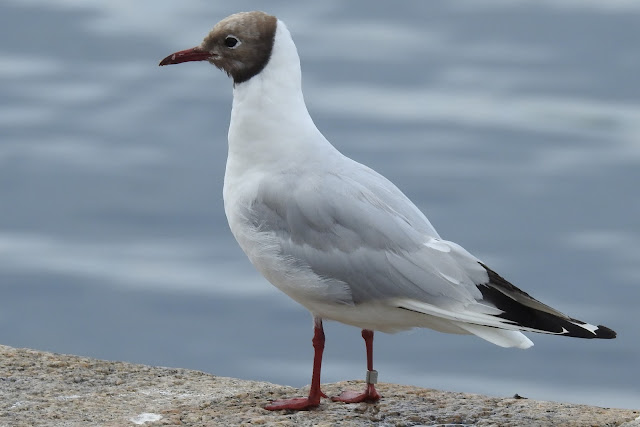 Today in Sean Walsh Park there were two Black Headed Gulls with Metal Rings!  This confused me at first.  There are good numbers present on some days but these are mainly birds passing through.  New Black Headed Gull today EW55882.  A BTO ring so it could be from anywhere in Ireland or the UK.  The second gull ended in 6943, I hope it stays around for another day so I can read the rest of the ring! 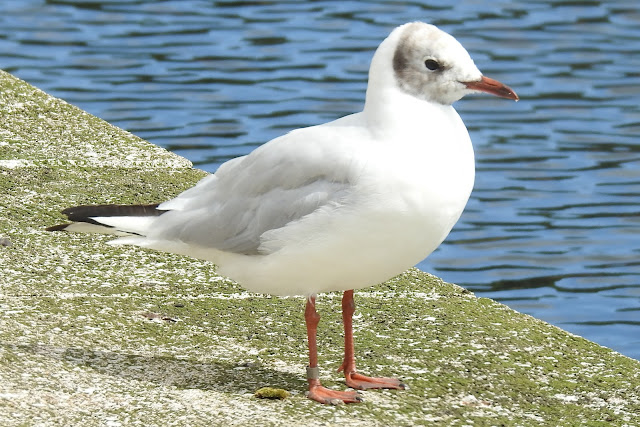 Posted by Graham Prole at 10:26 No comments: