My last trip to Howth before my sons Football season starts again.  Really looking forward to it.  However, the Offal Lorry which collects from the fish factories failed to show.  Which means most Gulls were asleep on the roofs and their legs not visible!  We recorded 6 Colour Rings, 3 Blue and 3 Red. Blue 1SV (2012), 3JU (2015) and 1AM (2010). 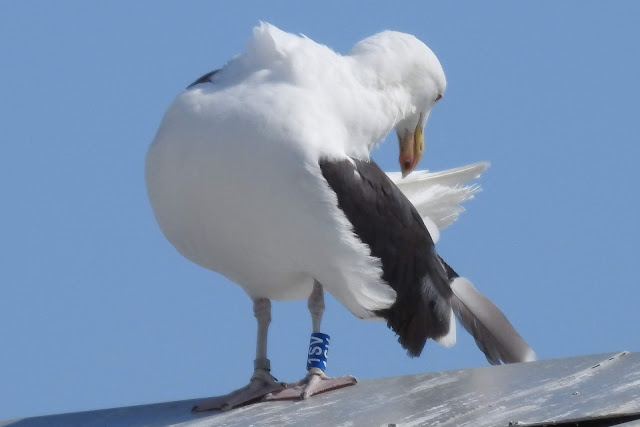 However the red Rings were what we were looking for. Red [724:D] was ringed on Irelands Eye in July and this was the first sighting since.


Red[706:D] was ringed on the same day.  One of it's parents is Blue [0LR], not seen today.  First sighting away from Irelands Eye.

We stopped briefly at Bull Island where Tonya spotted a white Ring on a Black-headed Gull.  White [AF442].  Ringed in Germany in 2014, I recorded it at the same location in 2015.  I wonder if it has been recorded here since.


We crossed the road to St Annes Park.  Again we were lucky.  Tonya spotted a metal on a Juvenile Black-headed Gull.  It is one of the Danish Special Metal rings that can be read easily as the code is vertical and repeated.  I have entered it on DEMON and await a report.

The Black-headed Gull from the Brewood scheme made a brief appearance again today.  Hopefully it will stick around. Also present as usualy was White 27H0 from Gloucestershire in England.  The metal ringed Juvenile 6456000 from Sweden also appeared as well as Green[2ACA] which I ringed last year.   These are becoming the regulars for this season.  The Swedish Metal ringed Gull who for many years was a regular, 6430814 has failed to show so far.  Although looking back, some years it didn't return till early October. 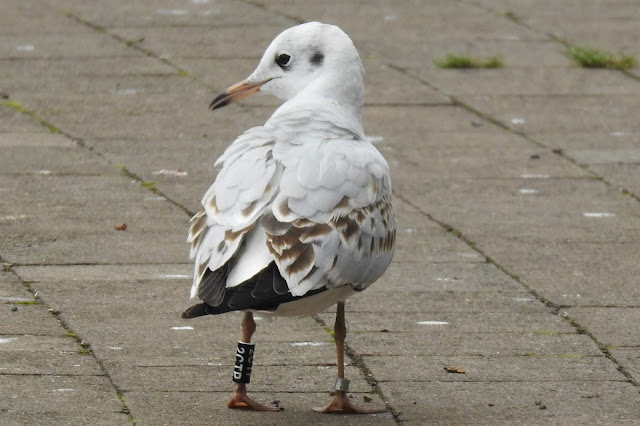 A Strange week in the Tallaght Parks so far, plenty of Black-headed Gulls but no rings, not even the usual suspects.  However, today I spotted a Juvenile on a lamp-post.  Another Brewood Ringers Juvenile from Marsh Lane.  That is between Birmingham and Coventry.  Reply received very promptly.  That is a distance of only 205 Km.  It is the 3rd from this scheme I've recorded, the 2nd in Sean Walsh Park.  The Juvenile Red 23L4 is the same club but different ringing site. 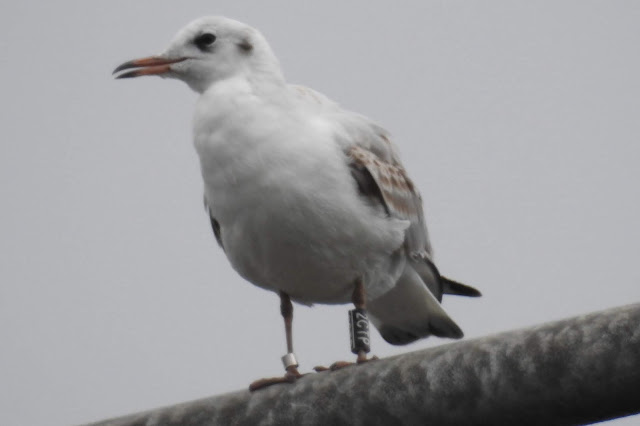 Coming home this evening I passed the College of Surgeons in Sandyford.  150 gulls on the front and 70 on the back and not a single coloured ring.  Notably there were 8 Mediterranean Gulls.
I made a final stop neat the Beacon Hospital and spotted a Med with a white ring.  Another Belgian one with a ring I hadn't recorded before.


In Drimnagh this afternoon, a 2 minute stop produced 2 of our red ringed Herring Gulls.  013:D and 014:D.  Both ringed one after the other in St James Hospital last year.  They were perched on opposite goals.  Two record shots taken, but before I could get out and obtain decent photos they all went up!  No idea what disturbed them.


A trip to Bray this morning and I was immediately trying to relocate an Orange Ring that flew past me.  When I did, someone had put a pigeon ring on a Gull - not sure why?  Gull was very dark and possibly a Lesser Black Backed Gull? 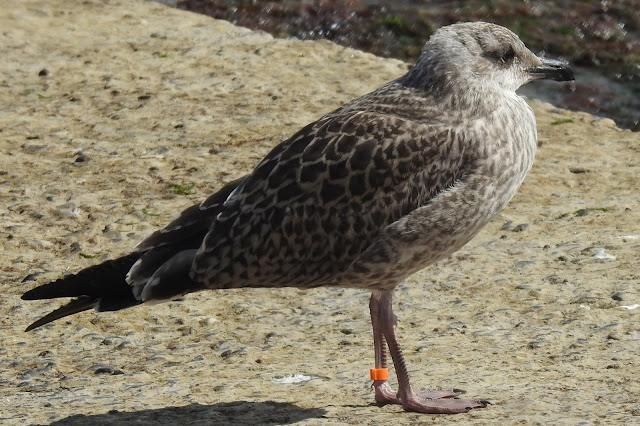 Next, among the Black-headed Gulls one bird stood out!  Was it going to be a rarity!  No, it turned out to be a juvenile Kittiwake! 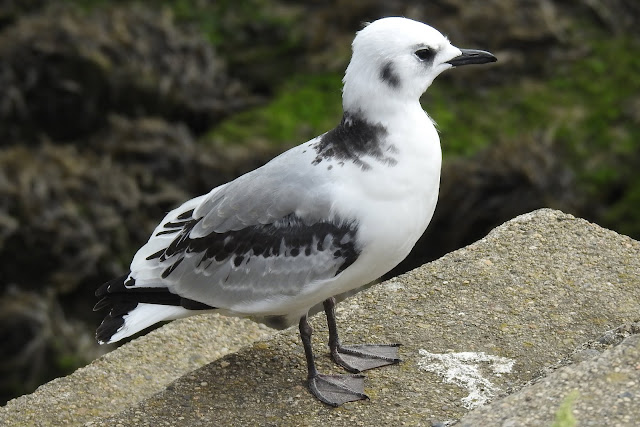 There were almost 300 Gulls present between the Harbour and the river and not one Darvic.  Still, I read 16 Swans and one was new for the 2018 survival figures.  CBPP was ringed in Sept 2017 and this was a first sighting since ringing!

I don't normally scan Booterstown Marsh as for ring reading it can be frustrating and today was no different.  The waders all roost on one leg and although you can see colour rings you can't get the full code.  This is probably the Icelandic Godwit I record every year here, ( Red / Orange//Orange over Red Z) but it never moved in the hour I was there! 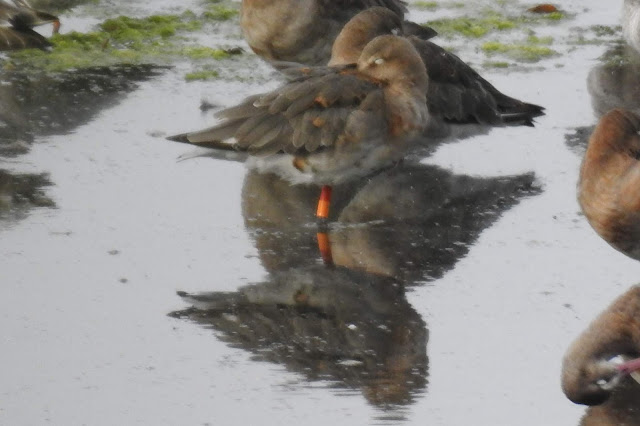 I went onto Sandymount Strand as scanned a few hundred gulls with no luck, so I read a couple of Dublin Bay Oystercatchers.  Again most were roosting and standing on one leg.  You could see the project markers  but couldn't read the codes!

Nothing new in the Parks of Tallaght at the moment but what is striking is how good the black-headed Gull breeding season was with a high proportion of Juveniles.

In Tymon park today I was looking out for a Polish Black-headed Gull Yellow [T96W].  I was just leaving when it showed up briefly.  It was ringed in 2017 and I recorded it at this location 3 times last winter. 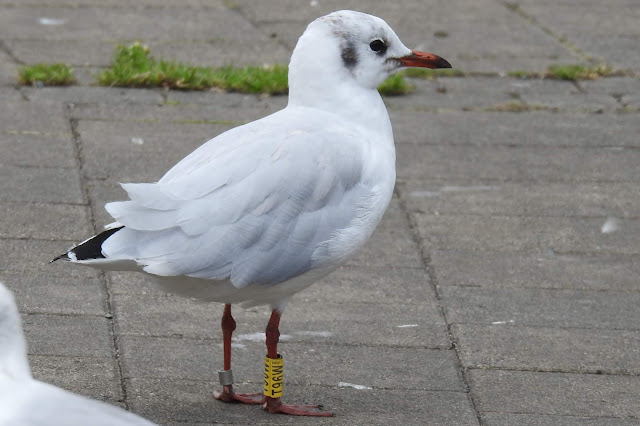 However, bird of the day goes to the following Black-headed Gull with a metal ring as it took 61 photos to get the last digit!  Ringed in 2017, I am awaiting the details of this new to me Gull.


I stopped at Sandymount Strand on the way to meet some friends and recorded just one Colour Ring in the fading light.  Sunset 20:55 today.  Another Polish Black-headed Gull.

At the 40 Foot, in Dun Laoghaire, there was a high tide roost of Terns and Mediterranean Gulls.  Bird of the day was a Mediterranean Gull White[3289].  I've never seen it before and it is not showing on my list of Meds recorded in Dublin.  It was ringed this year in Antwerp which is why I haven't recorded it before! 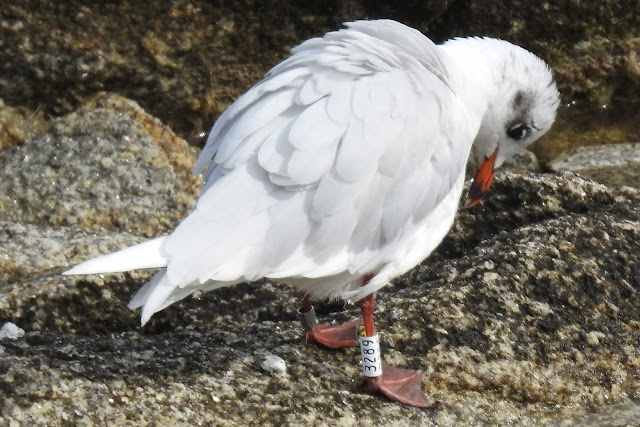 There were 2 other colour ringed meds present - Green AKAJ from Germany and Red PRN6 from Poland.  However I started going through the Terns.  Only one colour located.  The legs are so short it took a while to read it as 1 digit was covered by feathers!

I thought I recorded a Rockabill Metal Tern ring A over 7, but it should be 2 digits over 2 digits, so incomplete -  the Roseate Tern that got away. 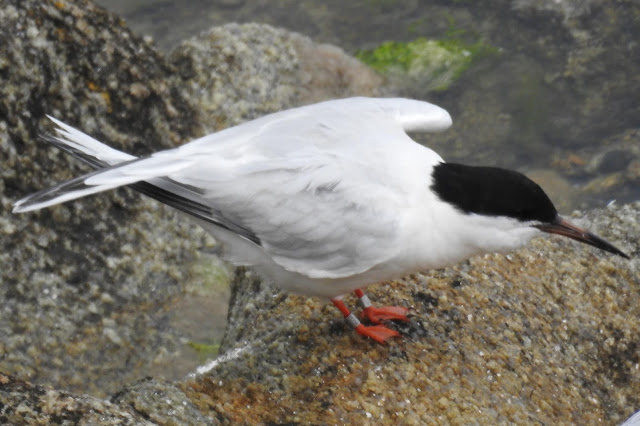 Every year at Bullock Harbour the Black Headed Gull 6214578 gets harder and harder to read.  The ring has gone from poor to really bad this year - hardly legible.  Ringed in 2005 in Sweden.  Today sections of the ring looked blank.  Photo below is 2015 and todays photo 2018!  It's not out of focus just worn.

At Sandyford Industrial Estate I got 1 of our red Ringed gulls.  187:D is an urban Gull ringed on teh roof of a Dublin Hospital.  This is a first sighting 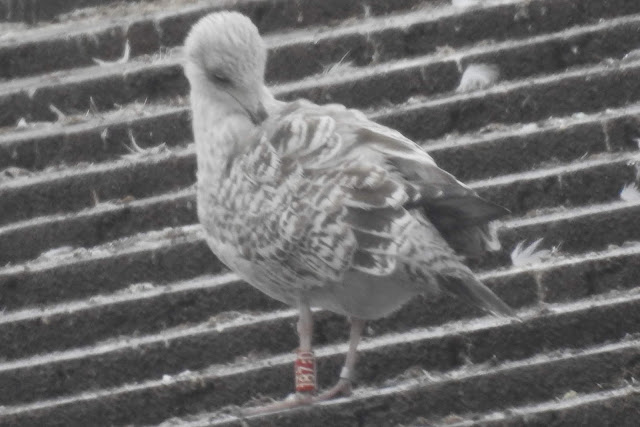 Human behaviour is different at the weekend.  There are matches on the Football pitches.  The school playgrounds are empty.  So Gull behavior is also different and it is good to look in Sean Walsh Park at the weekend.  Today Red 23L4, Green 2ABA and a Juvenile Black-headed Gull with a tall metal ring!  The metal ring was taller than a BTO metal so I knew it would be from further afield.

It took a while to get the ring code - it was from Sweden.  It will be interesting if it is seen mid week from now on.

The big news of the day is the safe return of Black Headed Gull WB[E5VA].  Having first Arrived in January 2012 as a Juvenile, it is good to see it back from Holland for another Winter. 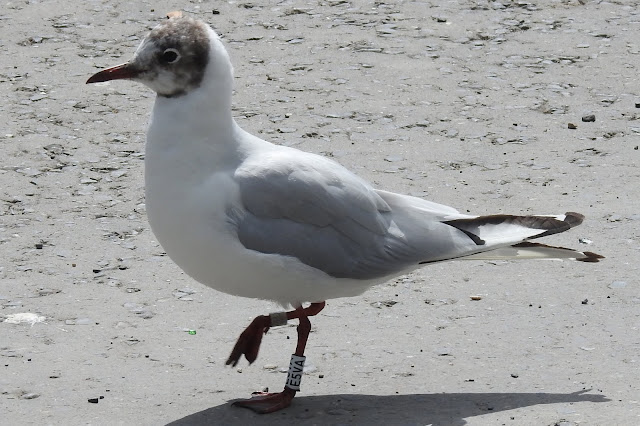 Where are all my Swans gone!  Out again looking for Colour Ringed Mute Swans.  I am about 100 below what I expected to re-sight this year.  Between myself and Tonya we recorded about 50 rings, but only 3 to add to this years survival totals.  The rest of August will be mainly focused on trying to find some of the missing Swans.

However, bird of the day goes to this Polish Black-headed Gull.  Yellow[T2RW].  The Polish Website appears to be down for maintenance, so hopefully I will get some details tomorrow.

Surprise of the day was the resighting of the Common Gull from Northern Ireland, Blue [2ACV].  Having first sighted it in 2013, it is the 3rd sighting at this location.  It has been recorded back in Northern Ireland.

Today I went to the South Wall of the Liffey in Dublin.  Hundreds of terns gather on the railings.  They are a small bird and their colour rings are tiny.  However, I was able to read 4 of them.  All 4 happened to be ringed in Dublin, but I expect to get some from England and Scotland and some in Dublin have been record from further afield,  post breeding is a good time to check the huge flocks

The photos aren't great, but the distance and the fact I had to stand on a wall to see their legs meant no tripod, the follow photo shows what I was looking at.

This morning in Sean Walsh Park, a metal ringed adult Black Headed Gull appeared.  Quickly out with the camera and recorded it's metal ring.  What a surprise! HA23459.  This Lithuanian Gull I haven't seen since March 2016.

Black Headed Gull round up!

Red 23L4 from the English Midlands has remained present in Sean Walsh Park since it's arrival on July 27th. 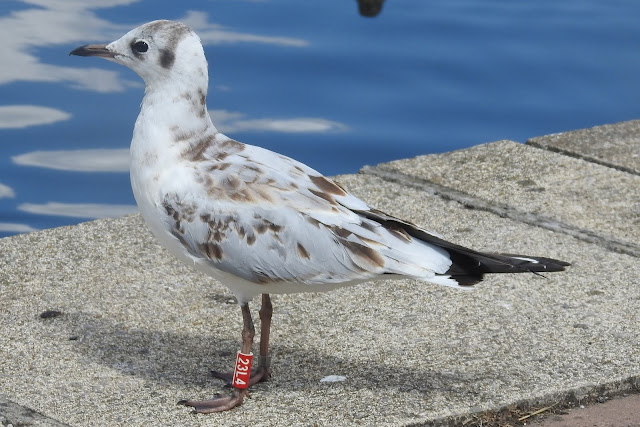 27H0 from Gloucestershire arrived back on Juky 31st and is also present most days. 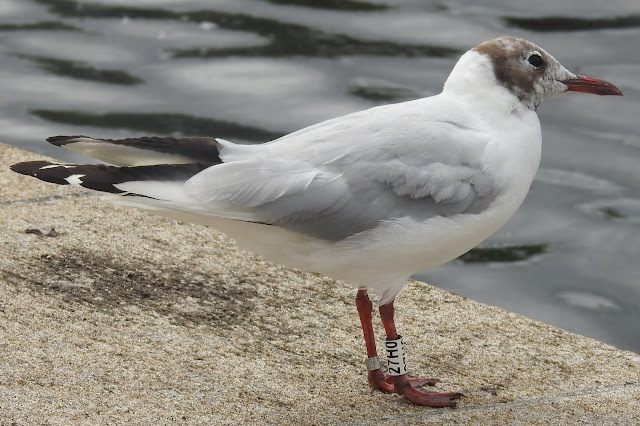 The last one to make up the trio which are ever present is Green 2ACA.  Ringed in Sean Walsh Park last year.

1st August
BIrd of the day goes to Herring Gull 644:D.  Ringed in June in St James Hospital it is the first of this years urban gulls to be recorded away from its nest site.  I got a photo and it promptly sat down, so this is the only photo I got!

Posted by Graham Prole at 15:36 No comments: